Dogs I Have Known 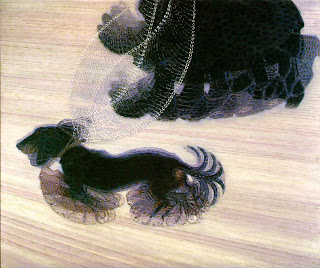 "The great pleasure of a dog is that you may make a fool of yourself with him and not only will he not scold you, but he will make a fool of himself, too." - Samuel Butler

The very first time I visited my mother after she had moved to Buffalo, she took me to meet her new favorite painting, Giacomo Balla's painting Dynamism of a Dog, at the Albright-Knox Gallery.  So many colors went into Balla's time-lapse painting.  The longer I looked the less certain I became of my counting abilities.  The four leashes were easy.  It looked like the dachshund had eight tails, but I was never sure about how many feet the woman had.  I don't know whether Balla (1878-1958) had seen the time-lapse photographs taken by Etienne-Jules Morey with his 1882 invention, the chronographic gun, but he probably did.  An avant-garde artist, Balla was a member of the Futurists, a group of Italian artists who made a fetish of movement and speed.  The cropping of the human figure at dog level was certainly due to the influence of photography.  The gentle humor was Balla's own. 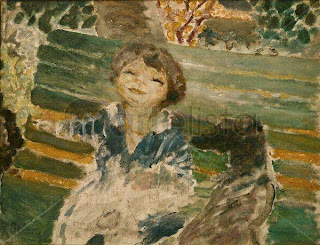 Although I have not met Bonnard's little girl with her dog in person, I had a little dog when I was seven years old.  We had our picture taken together in front of a slatted wooden fence, not on a park bench.  When I look at the two of them, I smile.

"I was a dog in my former life, a very good dog,
and, thus, I was promoted to a human being.  I
liked being a dog.  I worked for a poor farmer,
guarding and herding his sheep.  Wolves and
coyotes tried to get past me almost every night.
and not once did I lose a sheep.  The farmer
rewarded me with good food, food from his table.
He may have been poor, but he ate well.  And his
children played with me, when they weren't in
school or working in the field.  I had all the love
any dog could hope for.  When I got old, they got
a new dog, and I trained him in the tricks of the
trade.   He quickly learned, and the farmer brought
me into the house to live with the family.  L
brought the farmer his slippers ion the morning, as
he was getting old, too.   I was dying slowly, a little
bit at a time.   The farmer knew this and would
bring the new dog in to visit me from time to
time.  The new dog would entertain me with his
flips and flops and nuzzles.  And then one
'morning I just didn't get up.  They gave me a fine
burial down by the stream under a shade tree,
That was the end of my being a dog.  Sometimes I
miss it so I sit by the window and cry.  I live in a
high-rise that looks out at a bunch of other high-
rises.   At my job I work in a cubicle and barely
speak to anyone all day.  This is my reward for
being a good dog.  The human wolves don't even
see me.  They fear me not."
- The Promotion by James Tate, 2002. 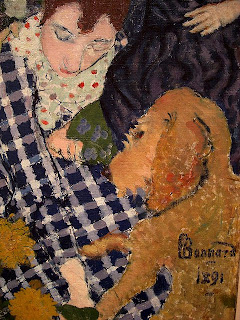 Bonnard's woman in a blue-checked dress with dog is just as much a favorite at the Clark Art Institute as Balla's woman and dog are the Albright-Knox Gallery.  (One handy though unscientific metric is how many versions of the image you can purchase from a museum's gift shop.)  When Sterling and Francine Clark  decided to build a permanent home for their collection of modern French art after World War II, they chose a remote spot in western Massachusetts to protect it from a possible Soviet nuclear attack.  So that is how the ginger-colored French dog came to live in Williamstown.    I include a Bonnard picture from the nearby D'Amour Museum because it shows more clearly certain features that  you may not notice on the internet reproduction of the Clark painting.  Bits of canvas show through the checked pattern of the dress in spite of heavy layers of paint.   Bonnard's preliminary sketchwork is visible through the paint in the woman's scarf and also in the dog's body.  It looks as though the large yellow marigolds in the lower left corner were an afterthought, or perhaps Bonnard just wanted to remind the viewer that this is a painting and a completely charming one to boot.

"Out of the mouths of city dogs
have come some useful truths.
Barks and whines - noise to some -
are fraught with ancient wisdom.

A dog, to share his basic instinct,
will warn, say, of the landlord
at the door to spoil your day.
"Don't open," he barks.  In vain.

When the van is loaded: laptop, mattresses, and microwave,
a wise dog rides in stoic silence
to the new (smaller) apartment

where joyously he soon resumes
his job of watching over rooms."
- Wisdom Tinged With Joy, Dorothea Tanning, 2006 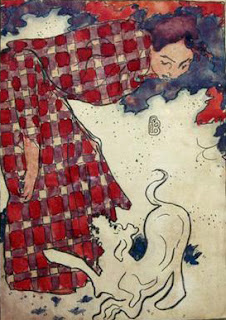 A suitably Gallic companion  is Roger Grenier's The Difficulty Of Being A Dog (1998, translated from the French by Alice Kaplan, University of Chicago Press: 2000).   A true Frenchman, Grenier begins in metaphysics. "Animals, which don't do anything useless, don't contemplate death." -  Paul Valery.
Grenier, who was active in the Resistance during World War II, is too much of realist not to recognize that what we write about dogs reflects our own desires.

He quotes Rilke: "It may be that the dog sometimes finds a recompense for its endless adoration in the caresses of a suffering mistress, or in lying on the body of a dead master and licking his hand. Its eyes may then assume the almost human expression of the lion on the Unicorn Tapestry, and it has a brief glimpse of the burdensome existence it is led toward by humans, without pity or remorse."
He knows how much dogs give to us.   People who live with dogs have "discovered a haven even safer and more private than their mother's bosom." – Colette Audry

We reciprocate their devotion in curious ways. Grenier tells us that Marcel Proust took time out from laboring on A La Recherche de temps Perdus to write regular letters to Zadig, the dog who belonged to his lover, Reynaldo Hahn. "My dear Zadig, I love you very much because you are soooo sad and full of love just like me..." 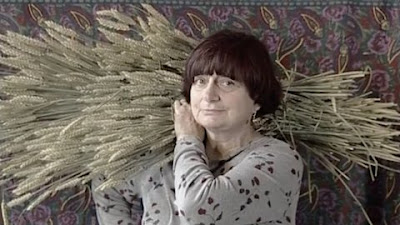 Following the harvest, comes the gleaning.  Clusters of grapes left on the vine,  apples that fall from the tree and are bruised,  potatoes with imperfect shapes, all  edible fruits of an earth that nourishes the gleaners who save them from rotting.   La pomme de terre,  apple of the earth, the French call the potato.

Gleaning is a term with biblical overtones to modern ears.  The practice followed in the wake of the beginnings of organized agriculture.  Both Christian and Jewish religious texts commend farmers to share a portion of the harvest with others and, in recent years, some have explicitly incorporated the practice into efforts to help the needy in prosperous countries.  But gleaning is a foreign practice to many modern urban dwellers, at least when it comes to food. We have replaced the concept with  ugly words: scrounging, scavenging, and at the extreme, stealing. 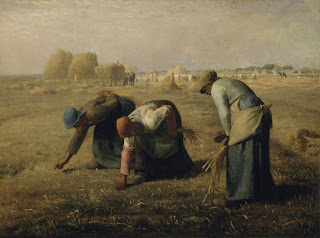 But in France gleaning is still a recognized part of the annual harvest.  When farmers gather their crops, the poor and the thrifty are allowed to take what has been rejected for commercial purposes. This practice is more than a custom; the right to glean (droit de glanage) was the way the poorest and weakest members of rural society, dating from the Middle Ages, were permitted to obtain food.  These images accurately portray the active role that women have played in gleaning.  What they do not show is that this activity has often been associated with controversy: the need of peasants for food versus the landowners' sense of ownership.
Filmmaker Agnes Varda, in her documentary Les Glaneur et la glanesue (2000) shows both the urban and rural practice is still a salient part of French life.  A debate among residents of the coastal town of  Nourmoutier is lively, humorous, and even confusiong, about the rules for how many buckets of oysters the locals may collect after a storm. Joining some local gypsies as they comb through mounds of potatoes dumped in the fields of Beauce, Varda finds a perfectly heart-shaped potato.  For her it becomes a symbol of food as an expression of the love between humans and earth.
The vineyards of Pommard appear again, as they did in Varda's fictional 1985 film La Vagabond.  In the earlier film, a female drifter is found frozen to death in a ditch, smeared with grape pulp.  The film, like other tales of travel and travail before it, the Odyssey and Aeneid, does not begin at the beginning but moves back and forth in time and among witnesses to the descent into invisibility of the young Mona Bergeron.

England used to, and France still does have laws that explicitly permit gleaning. How explicit?  Varda interviews the black-robed M. Dessaud, "our lawyer in the fields," a  magistrate standing in the cabbage rows who explains  the  French penal code (Article R-26.10) and the royal edict of Nov. 2, 1554, that establish the right to glean.  This bureaucratic side of the national temperament is  embodied today at the personal level by an apple farmer who explains the system he has developed for registering and licensing those who wish to gather his unharvested fruit. 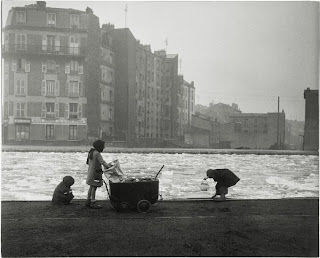 For urban gleaners, the orderly system of trash collection makes it at once more challenging to recover food and easier to hunt for other items like cast-off clothing or appliances that can be mended.   Varda introduces us to a  biology teacher, a vegetarian,  who has lived in a shelter for eight years and teaches reading to immigrants in the evenings. He is eating stale bread plucked from a trash bin while he explains to Varda the nutritional challenges of scavenging for food. Again, two years later, Varda revisits the people of Le Glaneur et la Glaneuse.  No one has suffered the grisly fate of Varda's vagabond but the world is still cold, if not frozen.

Les Glaneurs et la Glaneuse (The Gleaners And I), 2000, and Sans toit ni loi (The Vagabond - a rough translation of the French title would With Neither Roof Nor Law) 1984, are available on DVD. 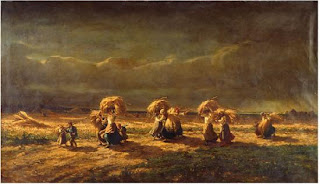 The image that started it all for Varda: The Gleaners of Chamboudouin  During her return to Musee Paul Dini she helps the staff bring the 19th century painting out of storage and, when they take it outdoors to be filmed in the light, a strong wind begins to blow as it does in Hedouin's painting.

Mea Culpa:  How could I have neglected to point out this remarkable website (listed in my links column)?!  Hay In Art.
\
Images:
1. Agnes Varda - from The Gleaners And I, 2000.
2. Jean-Francois Millet - Les Glaneuses, 1857, Musee d'Orsay, Paris.
3. Robert Doisneau - The Coal Gleaners> Canal Saint-Marttin. Alberrvilliers. 1945, Pompidou Center, Paris.
4. Pierre-Edmond Hedouin - The Gleaners Of Chamboudouin, 1857, Musee Paul Din, Villefranche-sur-mer.
Posted by Jane Librizzi at 10:56 AM 8 comments: