A Beach in Maine: Gertrude Fiske 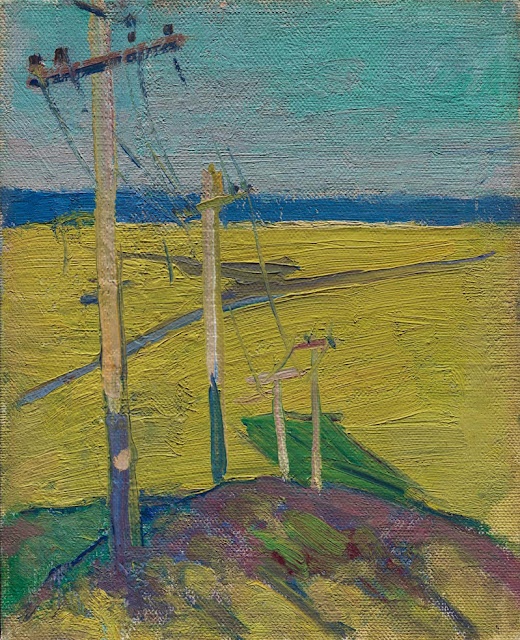 I have been to beaches in southern Maine in August, from Ogunquit to Wells to York Beach, and I know that the temperature of that strip of blue water in Wells Beach never rises above the low sixties.   This is water for serious ocean lovers.  But by late afternoon, when the beach would have the sun behind it, the sand is as hot as the chromium yellow that Gertrude Fiske slathered across her canvas.    Although the telephone poles are delicately indicated, they give a sense of solidity to Fiske's composition that scaffolds the thickly applied colors.   The triangle is one of the most satisfying structures to build a painting with, and this goes as much for a landscape verging on abstraction n as it would for the most conventional of portraits.  The pink and mauve strokes that are applied over the blue of the sky help the eye move around the canvas from bottom to top  and keep it from fixating on the horizontal lines of beach, sea, and sky or the bravura smears of color that represent the dune at bottom.  Wells Beach  is  the work of a consummate artist.

Gertrude Fiske studied in Boston with Frank W. Benson and Edmund C. Tarbell at the Boston Museum School.  More important for Fiske's development as a painter than either of these American followers of French Impressionism were the summers she spent at Ogunquit, Maine with Charles Woodbury and the short-lived Hamilton Easter Field (1873–1922) at Ogunquit in 1911.  As a teacher and then as a collector and dealer in Brooklyn, Field encouraged the careers of  several American modernist painters, including Marsden Hartley, John Marin, and the Zorachs, Marguerite and William, as well as Gertrude Fiske.

One line fascinates me: "More important for Fiske's development as a painter than either of these American followers of French Impressionism were the summers she spent at Ogunquit, Maine with Charles Woodbury and the short-lived Hamilton Easter Field (1873–1922) at Ogunquit in 1911."

I had assumed that for Australian artists of this era, and probably American artists as well, there was only one source of inspiration - local artists who had gone to France themselves or who had become keen followers of French Impressionism. I admire artists who were risk takers, especially if they were women :)

hels, from what I have been able to read, Fiske was able and did travel to Europe but she much preferred her native new England. Her work shows her searching for other ways of painting than impressionism. The most complete article I found about Fiske on the web is: http://christophervolpe.blogspot.com/2011/03/goldfiske.html

I don't happen to agree with his opinion of Mary Cassatt, but that's no matter.