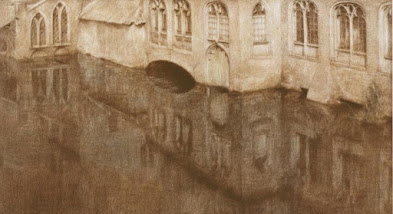 To medieval thinkers, everything on earth  was a sign, what was visible was only worth what it could extract from the invisible.  The waning of religion left a vacuum that nostalgia filled. The Saint John's Hospital was one of the oldest buildings in Bruges, a 12th century palace of healing. Painted by Fernand Khnopff in 1904, its reflection in the water reveals more of the building than the artist showed.

According to Pol de Mont, director of the Museum of Fine Arts in Antwerp, Khnopff described to him in 1901 the many hours he  spent playing with his younger brother Georges in the cellar of the family's home in Bruges. His vivid memories of staring out windows that were just above the waterline of the canal ,may have been the source of his later idiosyncratically cropped images.

Fernand Khnopff was fascinated by the mysteries religion, from the orthodox to the occult. He was attracted to the Salon de la Rose + Croix that ...art as a religion. His pictures are meditations on transience, often done in grisaille. He was inspired by Georges Rodenbach's comment on pastels as a metaphor for memory, images "half erased ... fading like a pastel drawing that has not been kept under glass, allowing the chalk to disperse." What Rodenbach made of Bruges was a metaphor for death. The publication of his novel Bruges-la-Morte in 1892 made his reputation.  By the late 19th century the canals had become polluted carriers of disease. For both men Bruges functioned as a 'soulscape."  In symbolic iconography, reflections signal the differences between perception and reality.

Khnopff''s adroit ways of keeping the curious at a distance were themselves works of art; he cooperated with interviewers throughout his career but only on his terms. His description of his only known return to Bruges in 1904 never varied: he told his friend Leon Tombu that h had donned dark glasses before leaving the train and he never removed them while outdoors, True or not, this story had a similar antecedent in Khoppff's hometown: after his grandfather died in 1868 he never went there again. Rodenbach, who never returned to his birthplace in Ghent, spoke of it constantly, according to his children.

Khnopff's father was a royal magistrate in Bruges where the family had lived since 1726.  Originally from Austria, the family had been elevated to the nobility by the Holy Roman Emperor in 1621.  Several generations has served as lawyers and judges in the Austrian Netherlands.  Belgium had only  become an independent nation in 1830. The family home was located a 1 Langestraat with a view of the Quai vert (Green Quay).

"Where life was concentrated in two or three rooms and where the salons were only used once a year for official receptions, only afterward to be closed once again for the length of the long silent winter nut also in the desolation of the summers. Grandiose dwellings, palaces of oblivion and solemnity..." _ Hippolyte Fierens-Gevaert. 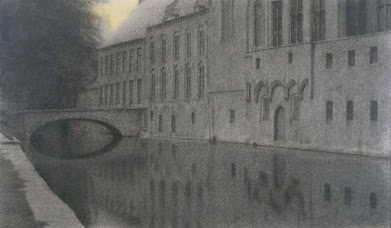 Khnopff's Memling Plaatz is a surreal island, threatened with inundation..by a rising tide.  The plaza and the base of the memorial to Hans Memling are realistically rendered but where is the statue commemorating the 15th century painter. When he was asked, Khnopff claimed he had never seen the statue. The painter may have been channeling the history of how Bruges hd been left for dead. Miraculously, it had become an accidental port by virtue of a tidal wave tht swept inland in 1134. In response, the citizens of Bruges had constructed a web of canals to take advantage of their good fortune. Gradually as they continued to dredge eventually the River Zwijn silted in leaving the city marooned at permanent low tide. By the 15th century Bruges had entered a twilight world. The glorious art and architecture remained, confirming its irrelevance in an industrial age. Perhaps this was what  Arthur Rimbaud had in mind when he opined that the French would have been second rate Symbolists without the Belgians. 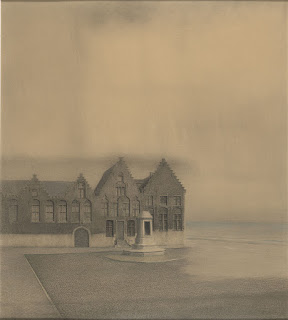 Posted by Jane Librizzi at 3:13 PM

It would be necessary to walk there in winter to find these magnificent twilight atmospheres, to approach his imaginary city.

Tania, what an intriguing piece of information you have shared. Does iit ever snow there or does it stay too warm for snow?

Sorry, Jane, I wasn’t thinking about the snow (of course it snows in Bruges in the winter) but about the crowd of tourists who visit the city and distort the atmosphere. Even if Khnopff’s Bruges is that of his inner vision.

Tanoa, I hadn't ven thought about the tourists. They definitely don't fit in with Khnopff's visions of Bruges.

Thanks for this post. Always fantastic to look at Khnopff's work, and your observations are illuminating. If it matters, the credits at the end of the piece are out of order, although the pictures themselves are labelled correctly.

Caspar, thank you for the kind words. And thanks for pointing out my mistake. I'll correct it right now.
I surmise that Khnopff would be delighted to know that we are still puzzling over his pictures.