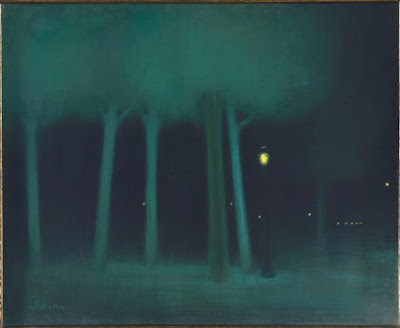 "Paris will be very beautiful in autumn...The town here is nothing, at night every thing is black.  I think that plenty of gas, which is after all yellow and orange, brightens the blue, because at night here the sky looks to me - and it's very odd - blacker than Paris.  And if I ever see Paris again, I shall try to paint some of the effects of gaslight on the boulevard."
- Vincent van Gogh to Theo van Gogh, in a letter #500

Ethereal and atypical, this delicate pastel by Jozsef Rippl-Ronai is suggestive of  much that is specific to the period when it was created (c.1892-95).  If you think of the works being created at the time by the Belgian symbolists, you can imagine its atmosphere is vaguely anxious.  The cluster of tree trunks appear as insubstantial as a group of hovering ghosts.  Rippl-Ronai creates this effect by making them appear as they would in a photographic negative: they are pale against the dark night.  And speaking of the Belgian, we will see similar trees in the 20th century paintings of a another Belgian, Leon Spilliaert (1861-1946), their (primarily) vertical lines suggesting interpretations as various as their individual trunks.

Like William Degouve de Nuncques' pastel Nocturne in the Parc Royale, Brussels, also in the collection of the Musée d'Orsay, Rippl-Ronai's Un parc la nuit is a love letter to artificial illumination.   We moderns may think about light pollution or the Dark Sky Society that supports the mission of astronomers but to people of the 19th century, gaslights offered the tantalizing prospect of nightlife, the nocturnal excitement offered by theaters, cafes, clubs, and bars.  We enjoy Un parc la nuit for the evanescent aesthetic it embodies but it can enrich our experience if we understand some measure of what its contemporaries saw in it.

Although the artist does not identify a location, he was living in Paris at the time and the cast-iron lamp posts peppered the French capitol; there were many thousands of them in place by the 1890s.  Robert Louis Stevenson, an enthusiast of the new lamps, called them "domesticated stars."  When they were superseded  by arc lights, he mourned their passing.  The lights hint at the presence of houses and roads in the distance, or maybe just more gaslights

Jozsef Rippl-Ronai (1861-1927) was from Kaposvar, Hungary.  He arrived in Paris in 1888, where he lived until 1901.  His  painting My Grandmother attracted the interest of Pierre Bonnard, Maurice Denis, and Edouard Vuillard, who invited him into their group Les Nabis (Hebrew for Prophets), where his nickname was, naturally enough, the Hungarian Nabi.  When Rippl-Ronai returned home to Hungary he brought back with him the latest developments in art. Nothing the Hungarian artist ever did rivaled the glitter and magic of Un parc la nuit.

While in France he also became friends with the sculptor Aristide Maillol.  His portrait of Maillol won a gold medal at Vienna in 1914. In 1925, Rippl-Ronai was invited by the Uffizi Gallery in Florence to contribute a self-portrait to their gallery of self-portraits.

To read more about the friendship between Jozsef Rippl-Ronai and Aristide Mailloll.