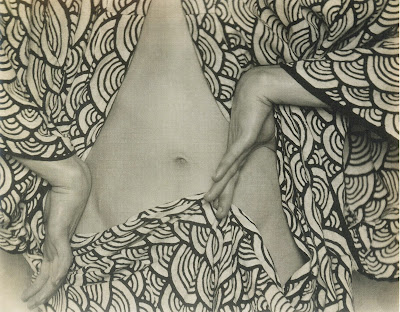 "In a world so confused
If you find love refused
Believe
In a life so defined
You could find time
To change your mind
Believe"
excerpted from Occupy Your Mind by Neil Tennant & Chris Lowe, 1989.


When Margrethe Mather (1886-1952) met Billy Justema in 1922, she was 36 and he was 17.  Through spending time with the handsome young Justema, Mather found a way out of  her grief over the unexpected suicide of her close friend Florence Deshon.  Through their relationship, Justema searched for a state of mind that would allow him to define  both his artistic path and his sexuality.  Mather photographed him as an enigma, as he was at the time to himself, in the process creating a portfolio to rival that of Alfred Stieglitz's images of Georgia O'Keeffe.  I could point out the sure compositional structure that informs Billy Justema in a Kimono (above), the curves and angles that form a harmonious whole, all things typical of Mather's  work.  But when I first looked at this picture what took my breathe away was the alluring, withheld eroticism of it.  Male or female?  So strong was the impression it made on me that I didn't care.


When Edward Weston called Margrethe Mather "the first important woman in my life"  in  Daybooks, his published journals, he raised damning with faint praise to an art form.  Not only did Weston expunge their love affair from his life, he administered a slap in the face to his wife Flora Chandler Weston, then already the mother of two of his children.  Also, in service to his own myth-making, he erased his artistic collaboration with Mather and her  role n expanding his horizons and his pictorial vocabulary.  Mather's use of form and contrast (she was familiar with Arthur Wesley Dow's theory of notan) is one of the most notablecharacteristics of modern photography and the move away from pictorialism.  For Mather, a strong sense of composition was innate; for Weston it was learned, and learned first from Mather. 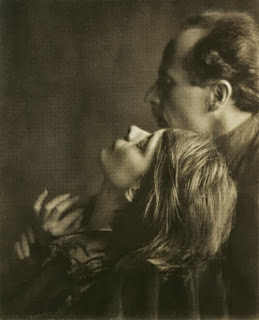 When the two met in Los Angeles in 1913, Mather was the flamboyant bohemian to Weston's conventional paterfamilias.  That same year Weston exhibited his work at the Toronto Camera Club and Mather her work with Association Belge de Photographie in Brussels. The woman who was born Emma Caroline Youngren in Salt Lake City in 1886, remains somewhat enigmatic even with the stellar book and exhibition by Beth Gates Warren.  Her mother died when Emma was ten years old and she was taken in by an aunt who served as the housekeeper for Judge Mather, hence the name change.
As an adolescent, Mather realized that she path to independence was through her attraction for men.  Whether and how many times she serviced wealthy businessmen with a taste for young girls is still an open question.  When her close friend Billy Justema came to write his memoir he could not verify some of the things Mather had told him about herself and some of them were untrue. As Mather later explained , by her mid twenties, her shadow life began to disturb her peace of mind.  After an elderly man died during "a particularly vigorous liaison", Mather decided to get a regular job.   Sans family, money, or much education, she picked up a camera and joined the Los Angeles Camera Club, making a studio for herself in an abandoned barn.

Another, younger man, would be more honest and more grateful than Weston.  William Justema (1905-1987) was an aspiring artist when the sixteen year old appeared at the Mather/Weston studio in Glendale.   Mather's relationship with Weston was disintegrating 1922 and, within weeks of their first meeting, Billy Justema was spending with Mather at her studio and in her flat. He  helped her to maintain her equilibrium when, the next year, Weston the moralist decamped to Mexico with another photographer - Tina Modotti
Justema, in a heartfelt tribute said Mather "would nurture and shield me, thoroughly but unwittingly corrupt me, and yet, above all else, would casually set up standards of ethical behavior and artistic excellence from which I have benefited for half a century."   Justema's recollection strikes me as the echo of Plato's  vision of Eros. "there is no one so bad that, once the god Eros had entered him, he would not be directed toward virtue."
Mather's life ended  in an antique shop not far from the Glendale studio she had shared with Weston.  She knew that he was ambivalent about her and wrote in her last letter to Weston, "[it] might be better to just forget me - to pretend that I didn't exist."  In 1976, Billy Justema remembered Weston as " both a more kindly and a more ruthless person than emerges from [the Daybooks].   Mather's generosity might have shamed the successful Weston; it did not.  She died on Christmas day, 1952, from multiple sclerosis. 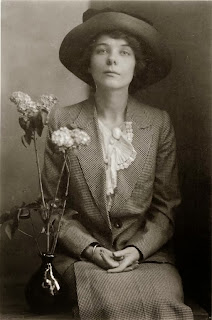 Hhhhmmm... In service to his own myth making. This is partially why I prefer to read artists' biographies written by outsiders, rather than autobiographies. Especially when the artist was male.

I must say, however, that Mather was not as tough as she could have been. The interwar era was tough on a lot of women, I suppose.

Christian, another wonderful photographer. Think of how difficult it was in 1920 to make those prints.

Hels, I downplayed the difficulties of Mather's life, letting Weston stand in for all the injustices. I can't begin to think how I would have coped with them. Mather was tough enough to do work worth remembering; we should all be so accomplished. Glad that you liked it.

Hi
I like the way you start and then conclude your thoughts. Thanks for this nice information regarding regarding I really appreciate your work, keep it up.

So this little Mormon girl was an inspiration to Edward Weston? Bet she learned how to manipulate men from her early church exposure and was smart enough to escape the lecherous crowd of religious charltans.