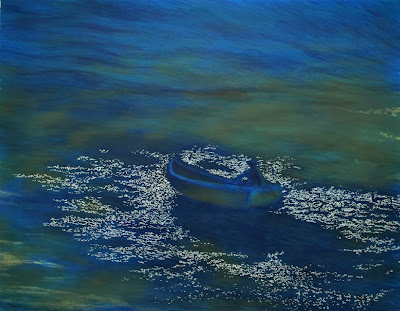 This is the happiest of days to be a woman.  Alice Munro has won the Nobel Prize for Literature.  And yet, like the fish that doesn't know the water it moves through, I don't know where women are now.  Will we ever be free to do things as men have done them, because we want to?  It is always too soon to tell.
But Alice Munro has been writing dispatches to us for decades in story after story,  bursts of light  like these from The Jack Randa Hotel (included in Open Secrets - 1994):

“Wives have diamond rings and headaches, Gail thinks. They still do. The truly successful ones do. They have chubby husbands, left-handed golfers, bent on a lifelong course of appeasement.”

“Was she a person who believed that somebody had to have the upper hand?”

“But love affairs were the main concern of her life, and she knew that she was not being honest when she belittled them. They were sweet, they were sour; she was happy in them, she was miserable. She knew what it was to wait in a bar for a man who never showed up. To wait for letters, to cry in public, and on the other hand to be pestered by a man she no longer wanted.” 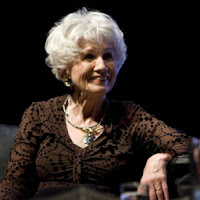 A notable characteristic of Munro's stories is the non-linear way  she moves them through time; the later stories especially, often "begin at the end and end in the middle."  Read attentively, this back and forth is also characteristic of the words that the American artist May Stevens uses in describing the sources of her paintings. I think it is a marker of the uncertainty that encapsulated in Munro title of  her book: Who Do You Think You Are?
"What I wanted was every last thing, every layer of speech and thought, stroke of light on bark or walls, every smell, pothole, pain, crack, delusion, held still and held together - radiant, everlasting." - A. M.

"Cross my river one could see a spit of land, a peninsula called Germantown.  It looked so green and inviting I longed to go there.  For all those sunny days of childhood I looked at it and longed to have it, to see it up close, to be there.  One day when I was in my teens I decided to go for it – to swim across my river, to actually touch the magical island.  I went with my little black dog, Julie, who of course, paddled rings around me until we finally got there…"

"Many years later when I lived in upstate New York, I found a lovely still quiet river with huge trees growing out of the far side, looking back at them, I stand in the river inching slowly forward, absorbing every color, every tone, every change, before I will dive in, dive under the water, becoming totally part of all I see. But – suddenly – standing there, looking down at my foreshortened legs distorted by the water, I see tiny fish, minnows, all around me, coming for the dusty rust-colored ribbons – like smoke – coming out of – where the water laps against the crotch of my bathing suit.  I am menstruating and the minnows are feeding off my blood.  I feel like river god – a goddess!! I am part of everything I see." - May Stevens, 2008, speaking at Rutgers University for the Heresies Film Project. 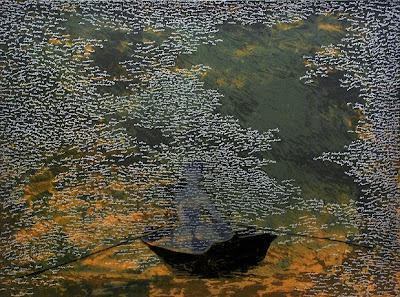 Like Alice Munro, born Alice Laidlaw in 1931  in  Wingham, Ontario,  May Stevens (b. 1924) grew up in a working class family, in Quincy, Massachusetts.  Stevens studied at the Art Students League in New York and at the Academie Julian in Paris. For many years she maintained a studio in Soho.   She lives now in Santa Fe.
Munro's father was a fox farmer; she studied English at the University of Western Ontario, working her way by waitressing and picking tobacco.  Like so many women, she gave up her education to marry James Munro when she was twenty.  Munro has spoken of her determination to write and her fear that she might not survive motherhood to do so.
My introduction to Stevens's work came when I saw paintings from her series Big Daddy (1967-1976) at the Albright-Knox Gallery in Buffalo.  By that time, Stevens was working on another series of "history paintings," an alternative history of art in answer to Linda Nochlin's deliberately provocative question (made in 1971 in the pages of Artnews): "Why have there been no great women artists?"
If feminism is unfashionable, and it always is, Stevens is doubly unfashionable in her commitment to combining beauty and emotion in art, a heavy lift after a century and more of modernism.  Through her recent series Rivers And Other Bodies Of Water (in progress), Stevens makes connections between her personal experiences and larger philosophical questions of human need and loss, but then she always has one way and another.   Both Munro and Stevens have lost their husbands in recent years; Alice Munro's husband Gerald Fremlin died in April of 2013.  But you don't have to be convinced by May Stevens's particular vision of a universal human consciousness to admire her work.  In these monumentally sized seascapes you can experience the movement of an evanescent substance, made with carefully worked-up layers of thick paint, as contradictory as that notion may seem. 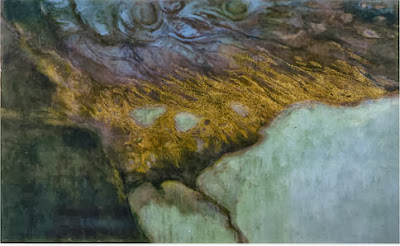 Two artists to discover for me - questions more interesting than answers, that's literature.

Tania, I'm quite sure that Alice Munro's books have been translated into French. Your are right that the questions are what make works interesting. Especially, since our answers are so incomplete. Munro has talked about wanting to write in a way that expresses the disconnections in life. She makes me feel less alone in my own inadequacies.