How to Ruin a Friendship 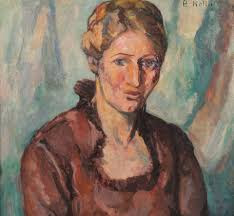 Alma Schindler was a Viennese beauty and a budding composer when she fell in love with Gustav Mahler, nineteen years her senior, and a moody, authoritarian composer who made Alma give up her music in order to marry him. Marriage marooned eighteen year old Alma, stifled artistically and taken for granted by her husband; she turned to her male admirers (and there were always several to choose from) for consolation.  This did not bode well for the future but Mahler died in 1911, leaving Alma to refashion her life.

Broncia Pinell was an established  artist of thirty-three when she married Hugo Koller,  a physician who had been introduced to her by the composer Hugo Wolf.  Before their marriage Hugo had to withdraw from the Catholic church because marriages between Catholics and Jews were not permitted. There is some indication that Broncia converted to Catholicism, at least formally. After their marriage in 1891, Hugo, an avid art collector, promoted his wife's career. And it bears underlining  that Broncia Koller-Pinell was an important Post-Expressionist artist, painting nudes at a time when it is was not considered proper subject matter for female artists. Indeed, female artists were barred from study at the Royal Academy until 1920.  Her legacy erased after her death, even as late as 1980 she was described as "a housewife who painted."

That these two women whose lives overlapped yet differed in  many significant ways ever became friends may have come about because of their children.  Koller-Pinell painted several pictures of her daughter Silvia and also of Alma's daughter Anna. The Mahlers often visited the Kollers at their summer home in Oberwaltersdorf, 35 kilometers outside Vienna.  The parrot pictured with Anna belonged to the Koller children. 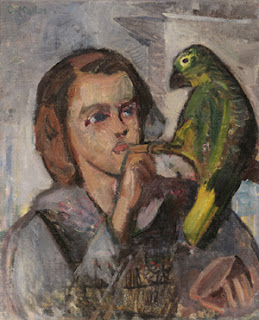 When Anna Mahler turned sixteen she fell in love with the Koller's son Rupert who was eight years older and a fledgling conductor; perhaps his choice of career reminded her of her lost father. The two married on November 2, 1920 but the marriage ended within months when Anna left Rupert.   Alma Mahler, who was extremely competitive in romantic matters, did not take the perceived slight to femininity at all well. In 1926 Alma persuaded her future husband Franz Werfel to write a play Bocksgesang (Goat's Story), a poorly disguised chronicle of the unhappy marriage in five acts. The friendship between Broncia and Alma disintegrated.

Anna Mahler married the avant-garde Viennese compose Ernest Krenek  when she was nineteen but that marriage also lasted mere months.  Eventually she married three more times. Although Anna had been expected to become a musician like her father, she forged her own path,  becoming a sculptor.Spending one's childhood in the vortex of her mother's turbulent love affairs was like earthquake with many aftershocks.

I have read truckloads about Alma Schindler, Gustav Klimt and Carl Moll, then even more when she married Gustav Mahler, Walter Gropius and Franz Werfel, and her long term love affairs. But I have never heard of daughter Anna's 5 marriages, her musical talents or her career as a sculptor. What an era!!

Hels, if anyone could overshadow her own daughter, people seemed to have agreed that it would be Alma. Anna's last divorce came when she was seventy-five.
Broncia Koller-Pinell was such a fine artist she should not have been so erased from memory after hr death.

I knew nothing about Broncia Koller-Pinell and I like "Silvia Koller with Bird Cage" (on Wikipedia).

Tania, glad you like her work. "Silvia Koller with Bird Cage" is one of Koller-Pinell's woodblock prints She studied with Adolf Bohm whose work appeared frequently in "Ver Sacrum" the magazine of the Vienna Secession from 1898-1903.