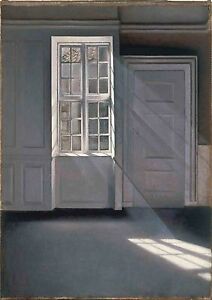 "This landscape looks like a secret
because the river can't be seen
from the spot where I am standing.
And therefore it is
the landscape where I most easily
would be able to do without myself.
Among these green hills and blue mountains
my person
almost feels an insult."
- excerpt from "The River's Secret" by Hendrik Nordbrandt, translated from the Danish by John Irons 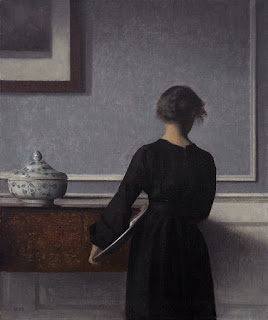 A silver age painted in shades of gray. An artist of diffidence characteristic of his countrymen. It is easy to look at the paintings of Vilhelm Hammershoi and see that he had been  deeply imprinted by the work of Vermeer. Like Vermeer, Hammershoi edited out what he considered unnecessary details from his paintings; we know this from the many photographs of the Hammershoi's apartments in Copenhagen. On looking closely at Hammerhoi's paintings, quiet interiors can seem drained of meaning or maybe this is what the world looks like when grand dreams and schemes have been found empty.

The Danish philosopher Soren Kierkegaard wrote that we live life forward but understand it backward.  When we consider the world that Vilhelm Hammershoi grew up in, the place and circumstance, an alternate way of looking at his paintings emerges. Those restrained, minimally appointed rooms may evoke thoughts of glossy decorating magazines in a contemporary viewer but that kind of projection merely makes it more difficult to experience the  paintings as Hammershoi intended.  What the artist intended has  been the subject of speculation, his very reticence an irritant like a pebble in a shoe. Something of an enigma to his contemporaries, he remains so.

Eighteen forty-eight was a year when people  throughout Europe demanded democracy but not in Denmark which  passed peacefully from a monarchy to a constitutional democracy in 1849.  Not surprising for a country that whose experience of the Reformation had been a mild one.

What distinguished Danish art of the 19th century was the influence of Golden Age Dutch painting  filtered through the soft northern light of Scandinavia. Even today Danes look back on the period between 1849 and 1864 as their Golden Age, a time when Hans Christian Anderson and Christoffer Eckersberg created the stories and images that reflected a new modern cultural patrimony for a nation renewed.  Into that world, Vilhelm Hammershoi was born in 1864, a year when bright ideals were crushed by the harsh realities of war and defeat. There followed a period of  intense introspection among Danes.  This unease of the spirit may be what we sense in Hammershoi's paintings, a feeling of the uncanny. Is this how the world looks after a great disillusionment? 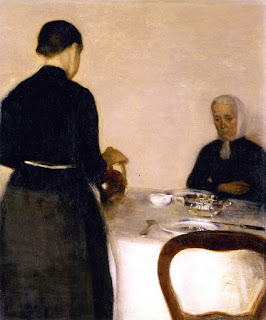 Yet Hammershoi's tenderness is apparent in images of loved objects he painted again and again, vessels used for the sharing of food.  From the china soup tureen with its pattern of swirling leaves (seen above with Ida in their dining room) to the eye-catching shimmer of the silver dish on the table between Ida and her mother-in-law Frederikke.

Images:
Note: Hammershoi did not customarily give titles to his paintings so titles may differ depending on the interpreter. 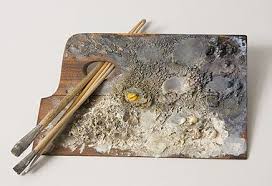 Posted by Jane Librizzi at 2:42 PM