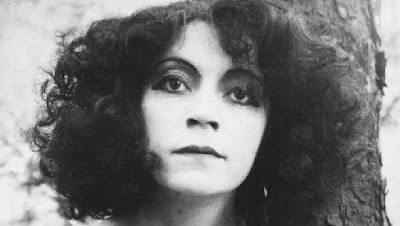 "She is everything! She is the drunkard's vision and the lonely man's dream." - Guillaume Apollinaire, 1920.
“She” was Asta Nielsen, a Danish actress and the most famous movie  star in the world.  American films had no one like her, the Gish sisters and Mary Pickford were grown-ups acting in girlish guise and Louise Brooks had yet to make her reputation.  An equally accomplished comedian and dramatic actor, Nielsen played the character of Lulu in Leopold Jessner's Erdgast (1923), based on the play by Frank Wedekind six years before Brooks assayed the part in G.W. Pabst’s production Pandora’s Box.


Nielsen was at the zenith of her career in 1920.  Tired of the roles she was being offered and despite her international success, she formed her own production company. For her first venture, Nielsen played the title role in Shakespeare's Hamlet; she was not the first woman to play the Danish prince.  But the role posed challenges for a woman and Nielsen, in collaboration with playwright Erwin Gepard, crafted a solution: her Hamlet would a princess who, for the purposes of royal succession, must masquerade as a man to take the crown.  This vein of gender-bending was just one intriguing aspect of Nielsen's acting persona that would have been tamped down by Hollywood.  Where Garbo had to compromise her androgynous sex appeal, Nielsen enjoyed greater autonomy in her career. 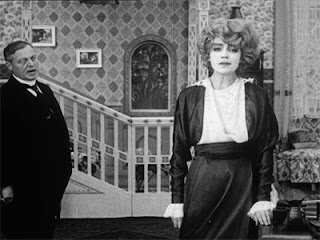 Look no further than The ABCs Of Love, a comedy that  looks astoundingly modern a century on.  Nielsen's character is a seemingly naive country girl who sizes up a prospective fiance, deciding to teach him to be a “real” man.  This involves her in cross-dressing and a trip to Paris (where else?). In The Eskimo Baby (also 1916), a outdated farce about a “native” girl from Greenland who is brought to Denmark as a human souvenir. Her shoplifting spree in a big city department store is a small surreal jewel of a performance. 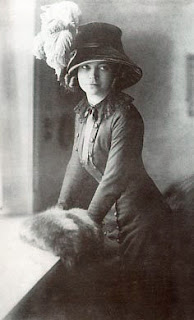 Sofie Amalie Nieslen (1881-1972) was the second child of a poor family in Copenhagen.  The father Jens was a workman who was often ill and unemployed; the mother Ida cleaned houses and took in washing to help support the family.  When Asta's father died in 1895, her mother wanted her to go into trade but Asta already knew that she wanted to act.  At school, her teachers had taken notice of her singing voice and provided lessons.  So did the instructors at the Royal Theater of Copenhagen where Nielsen enrolled in the acting school.
Then Nielsen suffered a setback that would have derailed many young women; she became pregnant.  Not only did she keep her child, a daughter she named Jesta, but Nielsen refused to marry the father and continued to pursue her career.  Success in a stage production of Strindberg's Miss Julie emboldened her.  Against the advice of her colleagues, Nielsen decided to try her hand at films, a new  medium lacking the cultural prestige of the theater.
Together with Urban Gad, a stage designer at the Royal Theater, Nielsen made her first film Afrgrunden in 1910.  Gad wrote the screenplay and directed while Nielsen played the lead as well as working on costumes and props. Nielsen and Gad were married in 1912 but separated three years later, terminating their professional relationship as well.  Their legacy is acpped by The Abyss, the film made Nielsen a star; no matter that the plot was insubstantial, Nielsen's acting was praised for its naturalism and subtlety.  Film historians agree that The Abyss is the most erotic silent film ever made. The onscreen chemistry between Nielsen and Gad culminates in a scene where Nielsen's character lassos him and, after tying him up, she brushes her derriere against him.  This isn't Kansas anymore. 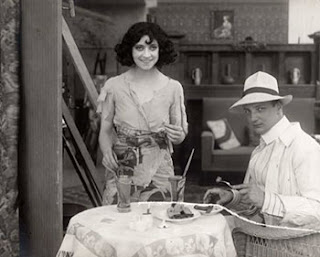 Nielsen starred in G.W. Pabst's  The Joyless Street (1925) with the young  Greta Garbo. With a sharp eye for talent, Nielsen immediately grasped the logic of pairing her with a nervous and inexperienced young woman We remember Garbo  today because she emigrated to the United States shortly thereafter while Nielsen chose to work with European directors.  If Nielsen had received the backing of MGM as Garbo did, we would know her today for what she was, the equal of the Swedish star.  Come to that, we wouldn't remember Pabts today if he hadn't gone on to make films with the American Louise Brooks, a woman smart enough to take her outstanding talents to Europe.
After the National Socialists seized power in 1933, as many filmmakers fled Germany,   Joseph Goebbels tried to entice Nielsen to stay by offering her a government-financed  film company but she refused.  She returned home to Copenhagen in 1937 and after Nazis troops occupied Denmark in 1940 they offered Nielsen the chance to make films but she again refused.  The woman who had dared to openly criticize the practices of the film industry, for the quality of their offerings and for their failure to support the liberal cinema, would not back down. When World War II ended. there was talk of Nielsen working with the young French director Claude Chabrol but I haven't been able to discover any details of the project.
Of the 70 plus films that Nielsen made, about 30 are available today, with the largest collection preserved at the Danish Film Museum  in Copenhagen,
1. Asta Nielsen in Daughter Of The Landstrasse,  1914, German Film Institute
2. Asta Nielsen, 1912. GFM.
3. Asta Nielsen in The ABCs Of Love, 1916, GFM.
4. Asta Nielsen and Urban Gad in The Abyss, 1916, GFM.