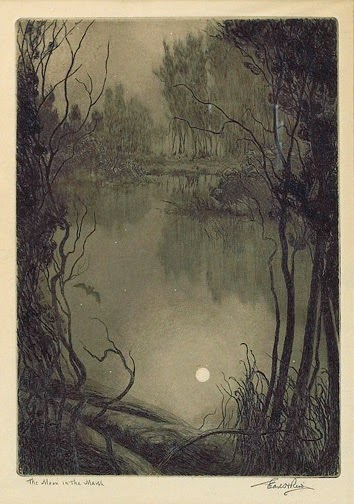 Sonnet XXXI
"With how sad steps, O Moone, thou climb'st the skies!
How silently, and with how wanne a face!
What, may it be that even in heavenly place
That busy archer his sharpe arrowes tries?
Sure, if that long-with-Love-acquainted eyes
Can judge of love, thou feel'st a Lover's case;
I read it in thy lookes; thy languisht grace
To me that feele the like, thy state descries.
Then, even of fellowship, O Moone, tell me,
Is constant Love deem'd there but want of wit?
Are beauties there as proud as here they be?
Do they above love to be lov'd, and yet
Those Lovers scorn whom that Love doth possesse?
Do they call vertue there, ungratefulnesse?"
- Sir Philip Sidney


Of all poems, the sonnet should be read and treasured and widely available.  The word comes from Old Provencal (sonet) by way of Italian (sonetto) and it is a little poem or song.  But in a misplaced zeal to clear the shelves of unnecessary volumes, libraries are selling off insufficiently circulated items on the theory that they have lost their value to readers who may not even know of their existence because they are unfashionable.  I was searching for George Meredith's 50-sonnet sequence Modern Love, a book I had borrowed several times but not recently enough, only to find that it was gone.  Originally published in 1862, Meredith, an English poet and novelist, detailed the disintegration of his his marriage to Mary Ellen Peacock, daughter of poet Thomas Love Peacock, and his distress when she left him for another man.  I consoled myself with another old favorite, Astrophel and Stella (Starlover and Stars), written during the 1580s  by the Elizabethan poet Sir Philip Sidney (1554-1586).

Astrophel and Stella (Starlover and Star), published in 1591, was the first great Elizabethan sonnet sequence, second only to Shakespeare's. In it, through self-revelation, Sidney ripped the mask off the Petrarch-ian sonnet. He had not intended his sonnets to be published so that may explain their intimate tone.  Fortunately for us, his friends saved them from oblivion, publishing the sonnets after his death.  Henri Etienne called Sidney  vir generosus, 'a man ‘in all ways generous.’ (Geneva: 1576) and his works is that, too.  Unusually for a child of noble privilege Sidney  took generous care of the people who worked for him, even giving money to a blind harpist at the tender age of eleven.

The self that Sidney revealed is his poetry is conflicted and inspired by what Robert Browning described in Joocoseria (1883) as “Never the time and the place./ And the loved one all together.”


Philip Sidney had known Penelope Deveraux since childhood. So it was not unusual that Penelope was eventually suggested as a bride for for the young man but in the Elizabethan fashion, wealth and rank outweighed mutual attraction on the marriage scales.  Penelope’s marriage in 1582 turned out to be an unhappy one,  Her husband, Lord Rich, treated her cruelly and, after Sidney’s death, Penelope was able to obtain a divorce. The poet’s friends averred that she had loved him.  Sidney though, had apparently dithered about courting her , only to  suffer the sharp sting of regret after she married someone else; the experience was more than a poetic conceit to him.  Under the guise of a lovelorn shepherd Sidney felt free  to express his melancholy and sexual frustration.
Sonnet XXXI is unforgettable from its first line, alhtough  verging on the ungrammatical ("With how sad steps"), a strange and riveting ode to the moon. Sidney who  claimed in his Defence of Poesy  that  "The poet nothing affirmeth and therefore never lieth," is also  a turner of tables, ultimately by suggesting darkly that those who receive love without returning it are ungrateful rather than virtuous.

These poets and also St. Bonaventure, whose Itinerarium mentis in Deum of 1259 contains the following  sentiment, are our familiars. Their poems may sound slightly strange to our 21st century but they belong to us.
" But if we regard speech with a view to its aim, it serves to express, to teach, and to move.  But it always expresses something by means of an image, it teaches by means of a force of light."