I Macchiaioli: The Radical Light of Giuseppe Abbati 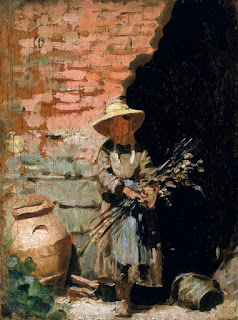 "Splendour of noon outspread,
when trees cast no shadow, and more and more excess of ligth gives to everything around
a tawny shimmer.

Above, the sun - and the dry shingle,
My day, then, isn't done. Not yet:
the loveliest hour lies beyond the wall
enclosing us in a wan sunset.

Drought all around: over a relic
of life, a kingfisher hovering.
Beyond dejection lies the bliss of rain,
but happiness won is in the waiting."
- Eugenio Montale, poem originally published in  Cuttlefish Bones (1925), translated from the Italian by William Arrowsmith, from The Collected Poems of Eugenio Montale, edited by Rosanna Warren, W.W. Norton, New York: 2012.


Radical in art, radical in life, that was Giuseppe Abbati and the artists known collectively as the Macchiaioli.    While Abbati has been admired for his luminous landscapes,  I am  intrigued by his most radical use of the contrast between darkness and light, how the two coexist in a single moment.  And how he extended this to working people in images of almost metaphysical stillness, as though time itself was bemused by the starkness of the Mediterranean sun.  Macchia means patches or spots in Italian and Abbati's fellow painter Telemaco Signorini gave the group its name, as a poke in the eye to their critics.

I haven't been able to date the picture Young Girl Standing in the Sun but  there are similarities to Interior of the Cloister, painted in 1861.  Both feature architectural settings - a crumbling archway in one, a glorious arch in the other.   The prevalence of stone, usually cold, takes on another meaning  in the rocky Italian countryside where the soil, difficult to farm at best and depleted of nutrients after centuries, would drive a mass outward immigration of its people for decades to come. 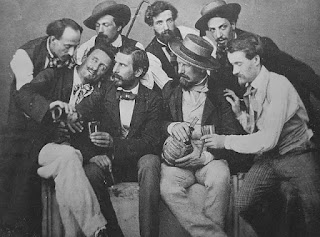 What made the Macchiaioli different from their predecessors?   Teachers of the academic approach to painting believed that drawing a perspectival framework on the  canvas was the foundation  for all  spatial relationships; connecting those elements through color then followed.  What the Macchiaioli did was to paint patches of contrasting color first and let that determine composition.   In contrast to the French Impressionists who recreated light through layers of brush strokes, the Macchiaioli worked with patches (macchia) of color.   Both were keenly interested in translating the new theories of optics  on to canvas but the Italians were also deeply concerned to put their artistic skills in service to improving the social conditions of the people and places they painted.  (The debate over whether art can move beyond evoking empathy in the viewer to causing collective action is too large for this article.)

During two decades, a short period in art historical terms but a long time in politics,  the Macchiaioli created  a body of paintings that have lost none of their freshness. They aspired  to change art and to change to society, to them it was all one.   Giovanni Fattori is considered the greatest for his mastery of bold effects to delicate ends, Telemaco Signorini is beloved for his integrating his social consciousness into works of beauty, and Silvestro Lega is admired for his poetic sensibility, while Abbati may have made the most impressive use of  pure color. 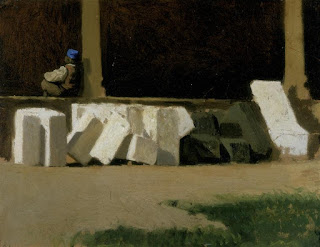 Even in its cropped simplicity Interior of the Cloister is recognizable to  lovers of the Florentine Renaissance.  A  workman, possibly a stone cutter, rests against one of Michelozzo's fluted columns,  pietra serena or serene stone, that line the interior courtyard of the Convent of San Marco.  With his back turned to the sun, his face is cooled by the shade.  The blue cap he wears draws our eye, as the artist intended, to remind us of the human aspect that built one of humanism's great architectural achievements.  Fra Angelico, who lived there for a time, decorated the cells, corridors, and cloisters of San Marco.   Pico della Mirandola (1463-1494), the philosopher  whose blistering Oration on the Dignity of Man was the declaration of Renaissance humanism is buried there.

Giuseppe Abbati was born in 1836 in Naples; his father  Vincenzo Abbati,  a mural painter, was the boy’s first teacher.  The elder Abbati’s  profession required the family to move around  to wherever work was on offer, first  to Florence in  1842 and then to Venice in 1846.   When Abbati enrolled at the Academy of Fine Arts, there he met Telemaco Signorini.  Florence in the 1850s, although part of the Grand Duchy of Tuscany, was a free city, a significant attraction for young men who involved themselves in Italian revolutionary politics.  Abbati volunteered for military service more than once, losing an eye in 1860 and then again, being taken prisoner by the Austrians and imprisoned in Croatia. After he was released, Abbati returned to Florence and painting.  On December 13, 1867, he was bitten by his faithful dog Cennino who was suffering from rabies.  The artist died thirty-nine days later; he was only thirty-eight years old.

A haunting memento of his brief life exists in Giovanni Boldini's  portrait of a serious-looking young artist in his studio, dressed in black with a black patch covering his right eye, his black hound Cennino at his side.  Paris in the 19th century was the center of the art world and since Boldini had the foresight to move there, he is  the best known member of his generation of Italian painters.
We are the heirs of a century in which revulsion at art-as-propaganda, or agit-prop,  was challenged by an austere vision that turned away from  Renaissance humanism.  Still, the word aesthetic contains  wisdom in its roots,  of something created with feeling, the opposite of anesthetic.
Images:
1. Giuseppe Abbati - Young Girl in the Sun, no date given , Pinacoteca provinciale, Bari.
2. unidentified photographer - The Macchiaioli group at Caffe Michelangelo, circa 1900-1903. Biblioteca Marucelliana, Firenze.
3.. Giuseppe Abbati - Interior of the Cloister, 1861,  Galleria d'Arte Modenra, Pitti Palace, Flornce.
Posted by Jane Librizzi at 9:01 AM