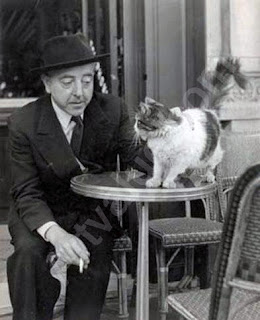 Forty years have passed since the death of Jacques Prevert on April 11, 1977.   Prevert, a lyric poet in a country that reveres its masters of song going all the way back to the medieval troubadour Francois Villon (1413-c.1463),  is marking the occasion with numerous celebrations.  Although Prevert's name may be somewhat vague in North America, French children learn Prevert's songs as soon as they begin school.
Like Villon,  Prevert's poems were passed around on handmade copies and by word of mouth during the German Occupation, much as the peripatetic Villon's verses  were sung in taverns by people who probably could not read them.   When Prevert's poems were  collected in book form for the first time  in Paroles (Songs, 1946)  they caused a sensation.  He had experienced something similar the year before when he collaborated with the refugee Hungarian composer Joseph Kosma on the song Les feuilles mortes.  Autumn Leaves, as it is known in English, has become the most recorded song of all time.  For their part, Parisians and all the French, even those who had escaped the Occupation, were   ready to celebrate and Prevert gave them what they needed - romantic nostalgia, in song with Les feuilles mortes and in the film Les enfants du Paradis, a romance among theater people set in the 1820s.

Fortune smiled on the boy Jacques, giving him a loving mother and an unconventional father.    After leaving school, Prevert served in the French army during World War I, getting as far from home as Constantinople.  Returning to Paris,   he was introduced to the Surrealist circle, and their leader Andre Breton, by his friend Raymond Queneau in 1925.  Their abhorrence of war and the utter absence of what the French reverently refer to as la gloire  drew the circle together.    But within three years Breton expelled Prevert from the group; the younger man's anarchic sense of humor was no match for Breton's heavy-handed leadership.  For his part, Prevert considered Breton too "grave."  In what counts as a surrealist move, Prevert went to work for an advertising agency and began to write the poems that eventually became Paroles.

Prevert's gallery of usual suspects included clerics ("Poetry is everywhere as God is nowhere") and the military  but, unlike others he named names, never hiding behind abstractions.  That was the kernel of his "anti-intellectualism,"  his scorn for the typical scholar  who would "expend his life erecting a self-glorifying  monument of theories."   Prevert called out the "religious insincerity" of the Popes, especially during war times, and social injustice in the persons of Marechal Petain and the French colonials in Vietnam.  His youthful encounters with the poor, introduced through his father, led  Prevert to join the October Group, a troupe of amateur actors in the 1930s.  The plays they put on may not have been much more than "agit-prop" but Fabian Loris, a Prevert biographer says, "It was not a theater, it was a way of life,  with Jacques Prevert as its strong foundation, his humor corroding like acid on a plate."   The Communist Party was not amused but the public was and this kept the group members safe.  Meanwhile Prevert also put his politics to work in  screenplays, among them Le crime de monsieur with Jean Renoir (1935), an idyllic story of a publishing cooperative in the days of the Popular Front and Quai des brumes with Marcel Carne (1938), the story of an Army deserter. 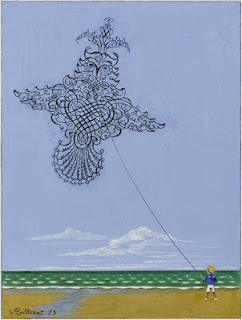 Abstraction, in words or images, meant little to Prevert who believed that "everything starts from something."  According to Prevert, if you paint a bird and the painting doesn't sing, "it's a bad sign."    In Gilbert Poillerat's  Portrait of a Bird that Doesn't Exist   bird song is made visible, a sunny version of the shadows on the wall of Plato's cave.   Remember that Plato believed sensations are the vehicle that allows us to experience what is universal: ideal forms he called them.   A fanciful picture of a child at the beach on a summer day is anchored, so to speak, by ontology.
So who was Gilbert Poillerat, an artist who never seems to get more than two paragraphs to himself in any written forum?    Poillerat was a maitre- ferronnier, a specialist in metalwork who studied for eight years, from 1919 to 1927 with the Deco master, Edgar Brandt.  According to journalist Mariana Paul-Bousquet, it was his graceful iron balustrades that made Poillerat's name and fortune.  In 1943, she wrote: "They are like a winged language,  crossing from the present to sweet visions from childhood."  (translation JAL)   There are those wings again!

Paris-Prévert by Danièle Gasiglia-Laster was just  published by Editions Gallimard in Paris.

Posted by Jane Librizzi at 1:00 PM

It was perfect timing, in Prevert's career and in French history, that he was introduced to the Surrealist circle after the war. I too would have thought that their shared horror of war and its utter waste would have made the circle mutually supportive. So I don't understand why Breton expelled Prevert. Did they not trust Prevert in some important way?

From what I've read, Breton had his distinct personality and so did Prevert. I think Prevert's belief in the real thing - whether a painting of a bird or the hypocrisy of the clerical class - made surrealism less attractive to him. His strong social conscience drove his will to change things; commenting from the sidelines wasn't going to satisfy him for long.