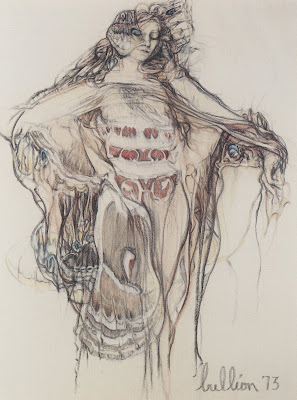 I too periodically search for Brenda Bullion, an artist. However, I'm not sure if the one you and I are finding elusive are one in the same. The birth date makes it seem possible so I am writing to see if you have any other information. The Brenda Bullion I am keep looking for attended the University of Arkansas in the late 1950's and early 60's. I was taken with Brenda's art I'd seen in a classroom studio. As a surprise my mother, also an artist and student at the U of A, bought one of Brenda's paintings for me.
I feel sure this is a long shot, but since my Brenda and your Brenda are elusive I decided to see if they could be our Brenda.

Hello, Carolyn.
I think you are on the right track. Corners Gallery in Ithaca, NY, is run by Brenda Bullion's daughter, Ariel Bullion Eklund. Here is her contact information. Good luck with your quest. And thanks for visiting.
http://www.cornersgallery.com/about-us-corners-gallery/

This is the same Brenda Bullion. I knew Brenda when she was in high school at Fordyce Arkansas. Brenda and I were at the University of Arkansas at the same time for 2 years. Brenda and I dated some.

Hello and thanks for your comments. Her daughter ariel Bullion Ecklund now runs The Corners Gallery of art in Ithaca, NY. In fact, I just received an email about two new exhibitions that are opening there.
Here's the link:
http://www.cornersgallery.com/about-us-corners-gallery/