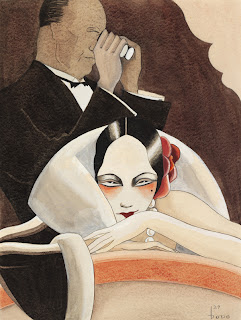 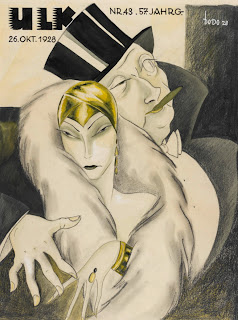 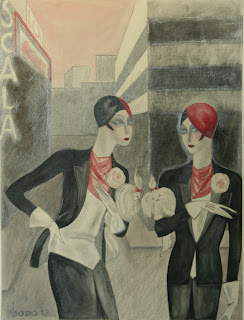 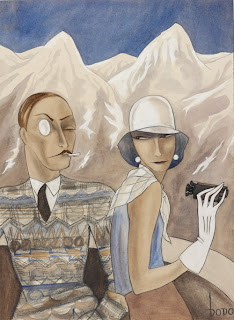 Images:   Dodo, given name: Dorte Clara Wolff (1907-1998)  The artist studied at the prestigious Reimann Art School.  She had a successful career in fashion illustration but is best known for her caricatures that appeared in the satirical magazine Ulk, published in Berlin.   If you think her images portray alienation between women and men, you have understood her work.
1. Wedding At The Dachgarten, 1929, Kunstbibliothek, Berlin.
2. Madame Baker, reprinted from Ulk, 1928, State Museum, Berlin.
3. In The Loge, 1929, reprinted from Ulk, State Museum, Berlin.
4. The Hero, 1928, State Museum, Berlin.
5.Sisters, 1928, Jewish Museum of London, UK.
6. The Man With The Glacier Eye , 1928, Jewish Museum of London, UK.
Posted by Jane Librizzi at 11:36 AM

the images you have chosen by Dodo seem a perfect illustration for these times you describe that Walser and Kastner experienced. Also easy to see the fashion illustration influence in her work.

Sally, Dodo's work is very underrated and under-represented. There were obvious (male) artists I could have chosen to illustrate this article but that just perpetuates the invisibility of women's lives - and they are certainly present in both books.
Although it is disturbing reading, I recommend "Mothers In The Fatherland: Women, the Family and Nazi Politics" by Claudia Coontz.

The Weimar Republic covered a brilliant period of parliamentary democracy in Germany that started straight after the catastrophe of WW1 ended. So in one way they could not have selected a more difficult time in history to experiment with democracy and culture: anger over the war, hyperinflation, vicious right wing politics and terrible unemployment.

Yet, yet... the art, theatre, literature and nightclub scenes were amazing. I don't recognise Erich Kastner's works but next time we examine WW1 and Weimar in lectures, I will cite your article. Many thanks.

Do you know one of my favourite blogs, Cabaret Berlin? http://www.cabaret-berlin.com/

Thank you. Hels. Better yet, see if you can't get them to read "Going To The Dog." It's extremely well written and not at all over-extended.