In The Absence Of Swans 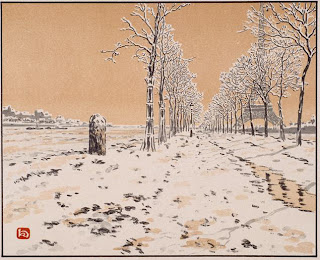 As Henri Riviere depicted it, the Ile des Cygnes ( Island of the Swans), lies deserted under snow.   The winter light produces only pale skinny-fingered shadows of the bare trees.  With the Seine to the left and the right of it, the island seems far from the bustle of Paris in wintertime.   But the empty allee is punctuated by a streetlamp, a sign of civilization,  and the Eiffel Tower is visible in the background.

Once there was no island and no swans lived there.  But, as Louis XIV saw it, in the beginning there was the Sun King and, in his name, all things became possible.   A  century after the Sun King had passed from culture into history, Voltaire agreed with the expansive Louis: "Almost everything was either reinvented or created in his time. "

Before there could be swans there was the idea of swans.   In the summer of 1676  Louis was enjoying his latest addition to Versailles, a labyrinth  where the  birds swanned  about for the entertainment of royal guests.  His imagination captured, the King pictured  swans  gliding  along the Seine as his guests made the excursion from Paris to Versailles.  So  Louis ordered the purchase of hundreds of expensive water fowl.

Although tiny in size compared to the waterworks Louis had caused to be installed at Versailles,  an island is no insignificant feat of engineering.  Conveniently located between the exclusive 7th and the wealthy16th Arrondissements.of Paris was a nondescript mound of dirt in the middle of the Seine.  If the phrase "mound of dirt" sounds flippant,  its origins in the pollution of a congested urban water highway are prosaic.  The King's engineers were ordered to fill in the land between four tiny islets, one of which the Isle des Vaches (Isle of Cows) had been used by peasant farmers as a place to graze their cattle.

Thanks to the parochialism of competing Parisian politicians this particular  mound of dirt was claimed by two separate jurisdictions,  its history the product of  competitive earth-moving. Whether the island was originally part of a bridge-building project or a natural accretion of soil to remnants of the Siege of Paris, c. 885, is uncertain.   We do know  that King Charles IX  had ordered 1,200 victims of the St. Bartholomew's Day Massacre to be buried there in 1571.

Critics of the monarch's project fretted that the swans were not cut out for urban life, but Louis ordered the local gendarmes to guarantee their welfare, no simple task.     An island in the middle of a city is valuable real estate that invites exploitation, even one that is only about 2800 feet long and 36 feet wide (850 meters by 11 meters).  After Louis XV granted the island to the City of Paris in 1722,  it was  in turn site of a factory, a mill, and a slaughterhouse.    The American inventor Robert Fulton conducted his early experiments in navigation with steam engines on the Ile des Cygnes in 1802. And then, during the major renovation of the Louvre in 1855, an incalculable amount of debris needed to be disposed of.  Parking it by the Seine in what was an affluent area provoked an early outbreak of NIMBY (not in my backyard), leading the authorities to send  the debris up the Seine in barges to be dumpd on the Ile des Gygnes.

For the International Exposition of 1889,  on the  occasion of the construction of the Eiffel Tower, a small replica of the Statue of Liberty was erected on the island.  Today, you can view both monuments from a single vantage point.  However, the swans have moved upstream to the Jardin des Plantes.