Sassetta by the Sea 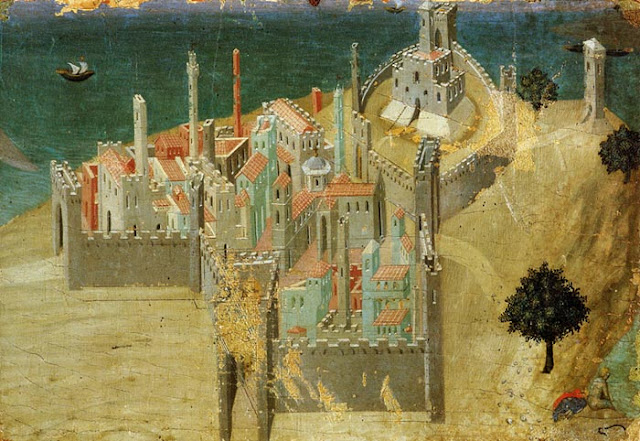 "O my country, I can see the walls
and arches and the columns an the statues
and lonely towers of our ancestors,
but I don't see the glory;
- from Canto I

"Human things last only a short time,
and what the sage of Chios claimed
is very sure:
that leaves and human beings
are similar by nature.
Yet few are comfortable with this idea.
We all give room
to restless hope,
the young heart's creature.
from Canto XLI

(Excerpts from The Canti,  poems by Giocamo Leopardi, translated from the Italian by Jonathan Galassi, New York, Farrar, Straus & Giroux: 2010.)

All appears tranquil on this summer day in central Italy in the 15th century.  The castle-fortress, Rocca Aldobrandesca (at the upper left corner),  built for Aldobrandeshci family, glows importantly in the sun, the buildings of the little walled city are the colors of Jordan almonds, the waters of the Tyrreanean Sea live up to their nickname 'the silver coast', and  ships sail merrily along,  the wind at their backs.  In the lower right corner a woman bathes in a stream, undisturbed. The scene remains much the same today as when Sassetta painted it,  a small fishing village except for the cars and kite surfers.

Stefano di Giovanni, known as Sassetta (ca.1392-ca.1450), is considered by many to be the greatest Sienese painter of the 15th century. His life is obscure in some aspects; no one is certain where he was born nor the origin of his nickname, although there have been plenty of guesses.  Siena is not far from Talamone: in any case, the artist never traveled very far from home, nor did he need to.  He worked in a milieu that included Duccio di Buoninsegna, called the father of Sienese painting, Simone Martini and the Lorenzetti brothers, Pietro and Ambrogio. His style was one of utmost refinement and technical virtuosity. His first works appeared in the 1420s.  There is a quality in Sassetta's style of  "just enough but no more" that has caused many artists of this past century to find in him a precursor.

Who were the Aldobrandeschi, then? There was  a pope in the family tree, Gregory VII from the 11th century.  Famously, Guiglielmo Aldobrandeschi was a character in Dante's  Divine Comedy, as was his son, cited as an example of the sin of pride. A family of wealthy aristocrats, the Aldobrandeschi owned large tracts of lands in southern Tuscany, necessitating an imposing watch tower in the fortress at Talamone.  By 1300, all but abandoned, it became the home of a garrison for Siena.  Talamone had attractions for those with ambitions and the wealth to bring them to fruition; settlements protected  by hillside enclosures surrounded by lands that had been irrigated since the time of Etruscans, settlers of   central Italy who predated the Romans.  It also had an advantage in being a Republic for some four hundred years from the 12th through the 16th centuries; unlike the Papal States which surrounded them, in Siena artists were accorded greater freedoms.

This miniaturized picture of a medieval commune has another remarkable quality: confidence.  Central Italy was an economic, political, and cultural hub and would remain so throughout the Renaissance. Sassetta was an extremely pious man but when he came to the sea, he had to own that life was indeed good.

Posted by Jane Librizzi at 8:49 AM