Jozef Czapski: A Not So Empty Train Station 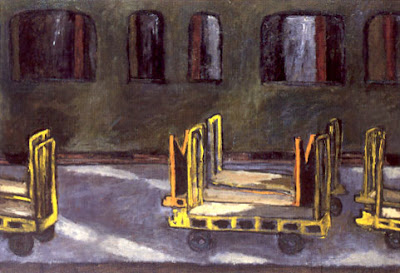 
Seven large empty baggage carts cluster on a platform.  In back is a train that is also  empty.  We don't see train tracks or the train station but we know they are there.  We also know that it is daytime because of the light streaming from the left, outside the frame.

Like a stage set waiting for the actors to appear, all the elements of the set are ready for the arrival of travelers and their bags, conductors and baggage handlers.  The muted institutional tones of depot architecture, the greens of the cars reminiscent of 'hospital' green, all typical of industrial paint.  Not so the yellows and oranges, fanciful colors that embody the excitement of travel. There is something quirky about these baggage trolleys  that makes a viewer smile at  these humble, utilitarian objects.

Pleasure comes from the vibrant yellows and orange of the baggage trolleys set against the violets of the shadows.  These allow us to imagine the sounds that we can't hear - the buzz of people talking,  announcements issuing from a loudspeaker, the noise of the engines and the hiss of the air brakes wit What a contrast between Czapski's painting and the empty urban scenes of Giorgio de Chirico, where silence and lifelessness are one and the same. Czapski's talent was to make something vivid and expressive from  a glimpse of tiny events most of us overlook.

Josef Czapsli (1896-1993) studied art in Krakow, beginning in 1921, and soon after he began to exhibit his paintings. His painting life was sidetracked by the many creative outlets he found when he moved to Paris and, again. when Czapski became a prisoner during World War II; yet he continued to sketch on scraps of paper, he lost confidence.  After a postwar stint as an international diplomat, he returned to painting and by the time he painted  Baggage Trolleys in the Station in 1965 he was.....

I like the games of the light in this painting... and I like yellow : light and vitality ! Have a good day, Jane.

Tania, I agree. There is much to wonder at in everyday life.

So happy to find your post on Jozef Czapski. I've been reading his great book, Inhuman Land, and am fascinated with his life, writing and painting.

Bessfones, welcome. Czapski is such an underappreciated painter. What an amazing and difficult life he led.