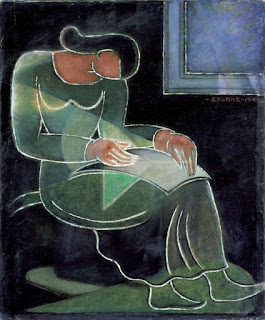 "Strange to see meanings that clung together once, floating away/ in any direction - " - Rainer Maria Rilke

Somehow these lines, seemingly unrelated to what I have been reading recently, nevertheless make a good epigraph.

I. The author of more than one hundred  books, all of them short (Artforum is 82 pages), Cesar Aira is one of Argentina's best known contemporary writers.  The first-person narrator of Artforum is a man obsessed by the international magazine Artforum, a publication characterized by cache, clout, and controversy.  Unfortunately for him, the magazine is be hard to come by in Buenos Aires and its maddening elusiveness only increases the feverishness of his search.  Haunting bookshops and used magazine stores, enlisting the aid of friends, he eventually breaks down and takes out a subscription, only to hound the mail carrier when they fail to appear on time.

II. When I studied comparative literature in college I found that the short story has a longer history in Italian than in other Romance languages, beginning in the 13th century with numerous anonymous novellinos and followed by Giovanni Boccacio's Decameron (circa 1349-1351). "The Novel of Juliet"  by Luigi da Porto (1485-1529) of  Veneto  The story had been told previously but it was da Porto who gave his lovers the names Romeo and Juliet. The Neapolitan Giambattista Basile (1566-1632) wrote "The Cat-Cinderella" which inspired both Charles Perrault an the Grimm Brothers.

Jhumpa Lahiri, winner of  the Pulitzer Prize in fiction for The Emperor of Maladies, lived in Rome for three years where she immersed herself in the Italian language and plunged into reading Italian literature.  The Penguin Book of Italian Short Stories is the result.  Forty stories, all by 20th century authors, include more by and about women than you usually find; each author is introduced and situated in their milieu.

Fittingly, the first story "Names and Tears" by Elio Vittorini (1908-1966) who, as editor at Einaudi, was the one who rejuvenated Italian literature after the Second World War.  Also, as a prodigious translator of  D.H. Lawrence, Edgar Allan Poe, William Faulkner, and John Steinbeck.  A deceptively simple story about  a boy writes words in the dirt while waiting for a girl who does not come.

An unexpected tale from a familiar name, Primo Levi's "Quaestio de Centaurius" is a fable of magic and cruelty about a centaur and the boy who befriends him.  And a tale of an old man and a doe from one who should be more familiar - Grazia Deledda (1871-1936), the first woman to receive the Nobel Prize for Literature in 1926. A rare find is Alda Cespedes, a Cuban girl who married at fifteen to gain Italian citizenship and then enlisted the help of Mussolini himself to arrange an annulment.  She later became friends with Fidel Castro, who did not hold it against her.  Her "Invitation to a Dinner Party" is central to understanding the ways Italians dealt with the Fascist regime and then with their liberators at the end of World War II.  An English guest and a bourgeois Roman couple perceive themselves and each other very differently.  A particular favorite  author of mine, Dino Buzzati who is represented by a  story new to me, "And Yet They Are Knocking at Your Door." Like its author, it is sui generis, telling the social upheaval that of the war through a domestic drama overtaken by the supernatural.

III. Goethe famously said that  a person is worth as many as the foreign languages they speak and anyone who does not know a foreign language does not know their own. This is the pretext for an extremely clever novel written in Spanish by a Polish writer. Aleksandra Lun's protagonist is also a Polish writer, one who writes in an imaginary language called Antarctic. Palimpsests upon palimpsests occur through variations and repetitions that are musical in effect. Czeslaw Przesnicki, an aspiring novelist/veterinarian,  ends up in an asylum in Liege, Belgium ("a country that has not had a government for the past year").  His roommate and his psychiatrist are both hounded by their own issues. His therapy sessions are interrupted by a parade of writers who wrote in "foreign" languages - Conrad, Nabokov, Beckett, Ionesco, Karen Blixen (Isak Dinesen) and Georges Simenon (a native of Liege).

IV.  Pierce-Arrow was a car company founded in Buffalo, NY in 1901;  Susan Howe lived there for awhile.  Peirce-Arrow is the title Howe chose for her poem-book about Charles Sanders Pierce (1839-1914), a mathematician and philosopher who, among other accomplishments, developed  pragmatism as a distinctly American philosophy, one that only gained attention when William James took it up.  As Pierce conceived it, pragmatism  was rigorously scientific while also containing spiritual elements Peirce's professional obscurity was matched by the personal obfuscation of his wife Juliette.  Howe writes  poetry of breathtaking artifice(I mean that as a compliment). She makes connections between Peirce and 19th century English poet Thomas Love Peacock, his daughter Mary Ellen, and her husband George Meredith, Tristan and Iseult, and other literary figures.  Howe has been labeled a Post-Modernist and a difficult poet. I found Peirce-Arrow delightful and a jolt to my own lines of thinking.

The books in the order I read them.

John Storrs (1885-1956) was an American artist, primarily a sculptor.  He studied with Laredo Taft in Chicago and with Auguste Rodin in Paris. In the 1930s he began to paint rather abstract pictures with human figures. Question: We see where the light from the window falls, so could it be that Storrs wants us to think of light emanating from the book?  I think so.

"The Penguin Book of Italian Short Stories" don't exist in french. Fortunately, this story of Buzzati is included in volume I of "All his stories" that I just found in my library. You made me want to read it again.

Tania, I love Buzzati, too! This book has just been published this minute, so I hope you get the French translation soon. Out of the forty stories there are many new writers (in Englsh). The Tartar Steppe is a memorable novel. His book for children, "The Bears Famous Invasion of Sicily" is charming with poems and illustrations.

Jane! Thank you for this! I'm still working on a post about my readings ... !

Rouchswalw,I'm looking forward to it. And I'm working on Part Three right now!