Like Oil and Water: A Color Lithograph by Louis LaBrie 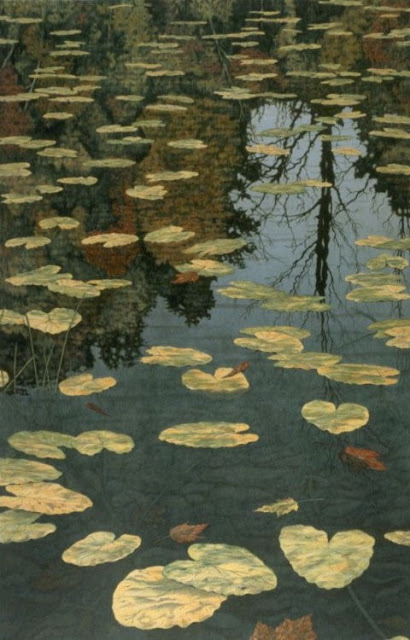 Patterns in nature layered and reflected in water, like a cascade of regressing mirror images become what all two dimensional images are at their origins: abstractions.   Scaly bark on trees seen through a medium as clear as glass.  These contrary are effects achieved by the American artist Louis LaBrie (b. 1950) in his color lithograph Autumn.   At first glance it could pass for a photograph, a tribute firstly to the artist's imagination and then to his skills.  He has said that he wants his works to be  equally effective from faraway as from close up.  With Autumn there comes a moment when you switch from gazing at the leaves flowing toward you on the surface of the water to trying to see upside down what is reflected in the water at a distance
Growing up in Martinez, an old city in the East Bay area near San Francisco, early on LaBrie became keenly attuned to an element of decline in the changes taking place in the natural world.   His first painting, made at the age of eight, showed the Yosemite Valley reflected in the Merced River.  After studying art at the University of California, La Brie has described sketching his way around Europe and North Africa for a year before settling once again in California.

A printing process that is based on the incompatibility of oil and water, that old cliche, is color lithography.  Designs are drawn on prepared plates using greasy crayons or inks and when moisture is applied to the plate it adheres only to the uncovered areas.  In the history of printing, color lithography is a relative newcomer, having been invented in 1798.  Its predecessor, relief printing, as its name implies, is accomplished by incising a design into the surface of a pla te and then applying ink to it.  It was first used by the Egyptians before the Common Era some two thousand years ago to print on cloth and spread rapidly after the invention of the printing press in the 15th century.  A painstaking hand-driven process was mightily helped by the invention of photography in the 1820s; the introduction of  halftones allowed an image to be broken down into a variety of sizes of dots.  Changes in the composition of plates from limestone to pre-sensitized plates in 1951 have  made ever more detailed and sublte effects possible for the accomplished artist.