"There's silence between one page and another.
The long streets of the land up to the woods
where gathered
shadows escape the day
and nights show through
discrete and precious
like fruit on branches
in this luminous and geographic frenzy
I am still unsure
whether to be the landscape I am crossing
or the journey I am making there."
"There's a silence between one page and another" by Valerio Magrelli (1957-), translated from the Italian by Jonathan Galassi, The FSG Book of Twentieth-Century Italian Poetry, edited by Geoffrey Brock, Farrar, Straus and Giroux, New York: 2012.


Although Silvestro Lega's The Visit may be unfamiliar, there is something familiar look about this scene.  What we see is the terrace of a country house where two young sisters (we assume the relationship based on their identical attire, a custom of 19th century Italian dress ) are welcomed by the mistress of the house, an ordinary scene from small town life.  To the right, the  mother lingers slightly behind, her presence may be taken as an avatar of regeneration and continuity.  This is the sign, if you will, of the symbolic connection to Lega's model: Fra Angelico's Annunciation, painted some four centuries before in nearby Florence.   Lega had often walked the corridors of the Convent of San Marco as a student at the Accademia: Angelico was Lega's intimate,if you will.

His use of  blocks of color marks Lega as  one of the Macchiaioli and a subtle one, but  his compositions  are rooted in the simplicity and balance of the Florentine Renaissance painters. There is no doubt that the women in The Visit  walk paths laid out by the artist, there is a formality that, in Angelico's work, expressed the sacred but  for Lega the poetry of affection and gesture is less definite, more allusive.   The transparency of his colors and their rendering of atmosphere earned the artists a nickname as the poet of the movement.  His contemporary Diego Martelli  wrote of Lega: "he was not one of those who, artistically speaking, can fling themselves into novel developments...." 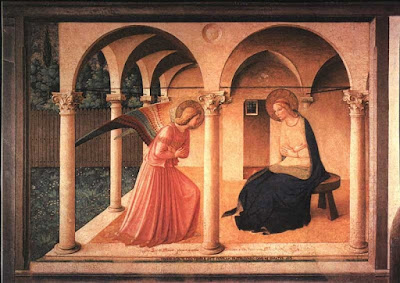 Born in Modigliana, a small commune in  Emilia-Romagna, Silvestro Lega  (1832-1895) studied at the Accademia di Belle Arte  in Florence, where  he learned the  principles of composition originally promulgated in the 15th century.  I think here of Piero della Francesca and Fra Angelico in particular, whose works so visibly influenced Lega's best.

At the high tide of revolutionary fervor in 1848, Lega volunteered to fight against Austria under Garibaldi, like many of his fellow art students.  This may be an odd detour but I note a likeness between  the Macchiaioli, art students whose ideas were shaped by revolutionary politics,  and the working class students who attended art schools in post World War II England only to make a revolutionary impact on popular music and film. A highly charged atmosphere, whether political or artistic, is a gift that buoys up creative energies; lucky are those born to such moments.
During his most  fruitful decade as an artist, the 1860s, Lega lived with a family named Batelli at their home near Florence.  Several family members can be seen in Lega's works; among them The Visit (1868). and The Pergola (also 1868, Pinacoteca di Brera).

Lega received a prize at the 1870 National Exposition held at Parma but the death of his close companion Virginia Batelli, followed in quick succession by three of his brothers, profoundly affected his temperament.  Also,  during the decade he began to be plagued by eye problems that eventually left him almost completely blind.and unable to paint.  The end came  in 1895 when died he of stomach cancer  at the  Hospital of San Giovanni in Florence.