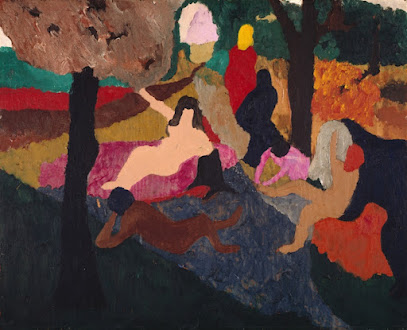 "The stars are scattered in the sky
irrespective of our need
for swans and lyres and charioteers
Our dreams are foolish
and our constellations
fictions
that wouldn't fool a child. We reach them anyhow
as if God were a coloring book
as if, like the blacksmith god,
we thought to catch Love
in a net."
-- "Hephaestus" by Linda Bamber from Metropolitan Tang, Jaffrey, NH, David R. Godine: 2008.
Currently touring  major American museums is the first retrospective in over twenty years devoted to  the African American artist  Bob Thompson, This House Is Mine  (Smart Museum in Chicago, High Museum in Atlanta, Colby Museum of Art in Maine).
This House Is Mine stakes Thompson's claim to be the inheritor of European traditions of Greek and Roman mythology and Renaissance Italy.  It's no exaggeration to say that Thompson's output was voluminous - more than 1,000 works in oil, watercolor, gouache. In a period of full time painting that lasted eight brief years, really a mote in the eye of Western art, Thompson  was fiendishly productive; he moved so quickly, onlookers had trouble keeping up.
Riff is a term of art for Thompson whose friendships with New York jazz musicians are frequently  commemorated in his paintings. He riffed  on Piero della Francesca (illusionistic spaces) and Francisco de Goya (dark and doom) and, here and there, on surrealism, too. Old Masters were  deeply unfashionable at the time, leaving the field to Thompson and he made the most of it. He made hiss first trip to Italy in 196, thanks to a grant.
His paintings are populated with human and animal figures mingled together, if uneasily.  Crowds of  monstrous creatures emerge from the shadows (see the brown bat at the far right (above) in The Drying After. Theatrical scenes become allegories of contemporary nightmares through distorted perspectives.
All are saturated colors like none seen since the time of the French Fauves (Wild Beasts).
Bob Thompson (1937-1966) died in Rome in 1966 following gall bladder surgery.
Image: Bob Thompson - The Drying After, 1961, oil on wood panel, Art Institute of Chicago
Posted by Jane Librizzi at 12:02 PM No comments:

Raoul Dufy: The Case For Beauty 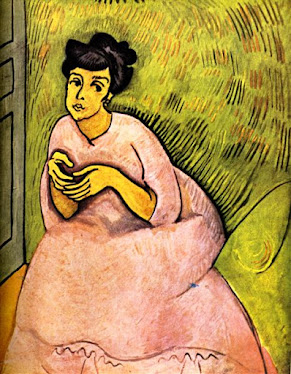 Not many artists are so distinctive that an adjective is coined in their honor but here is one: "Dufyesque."

Early on, Raoul Dufy (187-1953) became adroit at effacing the ugly, a talent that came in handy  for someone born in  Le Havre. Guidebooks agree the port  city is one of the least attractive cities in France. With its hustle and bustle, Le Havre provided the animation that was a characteristic of his work. But give Le Havre credit for its municipal art school where young Dufy began his art education.

Raoul Dufy had seen a retrospective devoted to Vincent van Gogh two years before he painted La Dame en Rose. Until then Dufy had shown little interest in painting human figures. Van Gogh's influence is obvious in the use of black outlining and  the halo of broken lines that makes the green room vibrate with energy.  The uninterrupted line of nose and eye brow is an elegant gesture. No chair is visible  although  she appears to be sitting. The pink dress barely suggests her figure; it is her face that is the center of attraction. A sliver of a gray door at left and an orange triangle. are the only hints of a location. At first the identity of La Dame en Rose (The Woman in Pink) was something of a mystery. She is thought to be Eugenie Brisson, his future wife.

After his mandatory military service Dufy won a scholarship to L'Ecole  des Beaux-Arts in Paris. During its brief heyday, bracketed by the Autumn Salons of 1905 and 1906, Fauvism was an experiment in color for its own sake that shook the staid French Academy to its boots. Dufy soaked it all up as he worked on improving his drawing skills.

By the late 1940s Dufy's ability to paint was so severely limited by rheumatoid arthritis that he had to fasten the brush to his hand. He died in 1953; the cause was intestinal bleeding, likely caused by his treatment with cortisone

Toward the end of his life Dufy saw himself dismissed as little more than  an illustrator. Accused of lacking seriousness, his brilliant performance has been overlooked by his critics. In recent years though Dufy's star has been on the rise because so much contemporary art is cold and impersonal. Indeed, Dufy has been called a modern-day Watteau for his depictions of the divertissements of the bourgeoisie  and their charming impermanence. "If Fragonard could be so gay about the life of his time, why can't I be just as gay about mine?" he retorted.

Jennifer Bartlett: Five In The Evening 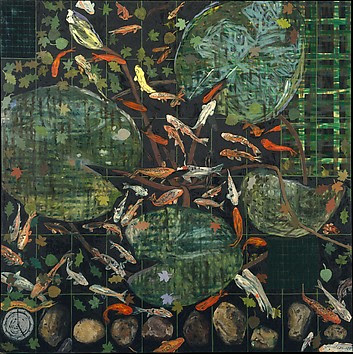 "Bartlett is an artist in the Renaissance tradition, equally engaged in philosophy, naturalism, and aesthetics, constantly questioning herself and the world with her favorite mantra, 'what if'?' " - Terrie Sultan
"She was outspoken and seemed very sure of herself, and she made people angry, especially  men." - Elizabeth Murray,  a painter herself, as well as Bartlett's friend
What Bartlett did sounded like conceptual art but with its bright colors and clusters of objects it didn't look like it.
Air: 24 Hours takes place around Bartlett's home and studio in Manhattan. To make  a cycle of passing time combined her fascination with the organizing possibilities of the grid and a feeling for the rhythms in nature. Arbitrary parameters stimulated her imagination, as they did for other artists in the 1970s like Sol Liewtt and Frank Stella. Things withheld hover over the paintings, giving them an air of  mystery. We are never certain whether we have recognized the artist's intentions fully. Bartlett revealed that ,"The Air paintings are derived very loosely from snap shots."
The clock is a time organizer while the natural elements add sensual detail. Notice in the lower left corner of  the canvas the small clock, its hands positioned at precisely five. The series is  enigmatic, but 5 PM  reads as a pond with goldfish circling four lily pads. They remind me of Japanese koi fish. The message of the Air series is that existence is  always in flux.
Jennifer Bartlett (1941-2022)  attributed her affinity to water to her childhood  in Long Beach, California.  She received an MFA at Yale University "I'd  walked into my life," she told Elizabeth Murray.
Image: Jennifer Bartlett - Air: 24 Hours -- Five o'clock, 1991-1992,oil on canvas, Metropolitan Museum of Art, NYC.
Posted by Jane Librizzi at 1:57 PM 2 comments: