Vittorio Bolaffio: A Lyric of Swallows in Spring 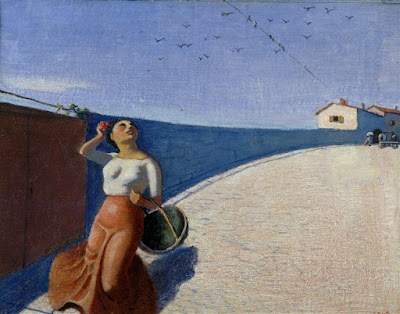 "Even when it seems that the day
has passed like a swallow's wing,
like a handful of tossed
dust that can never be
regathered and no description
no  story is needed
or heard, there is always a word
a small word one can say
if only to say
there's nothing to say."
- Patrizia Cavalli, translated from the Italian by Geoffrey Brock, from The Book of Twentieth-Century Italian Poetry edited by Geoffrey Brock, New York, Farrar, Straus and Giroux: 2012.

I. On a sunny spring day a young woman pauses on her way to look up at birds in flight overhead. A lyrical moment full of graceful curves, her arms, birds on the wing, and a slightly mysterious wall, not sinister but where does that brown gate lead?  Are we near the sea or up on the escarpment, pretty much the only choices in Trieste, wedged as it is between the mountains and the water.

It could be my imagination or it could be that the wall behind her, there for no obvious reason, is a symbol of the irredentism that is the defining characteristic of Trieste, longtime home of the artist Vittorio Bolaffio.  In Bolaffio's day Trieste was a port city of the Austro-Hungarian Empire, a fact that rankled the Italian patriots of the Risorgimento.  When World War I broke out Bolaffio was conscripted into the Austrian Army. After the war ended he moved permanently to Trieste, rented a studio, and made lasting friendships while absorbing the atmosphere of the Garibaldi cafe.

After studying art in the Florentine atelier of Giavonni Fattori he had headed to Paris, then the center of the art world, where he sensed to  the significance of Cezanne before most French artists caught on. The impact was so vivid that later when critics evaluated Bolaffio's work they found it to be unusual in its broadly European interests and influences.

An anecdote from the book Trieste nei miei ricordi (Trieste in my memories) written by Bolaffio's friend Giani Stuparich ...the charm of Bolaffio's personality that is visible in Spring with Swallows.
"... one morning I saw Bolaffio arrive in a taxi, and he came down with a very long frame under his arm and I led him into the garden sun where the children were playing.  He called them to see the painting and watched their reactions. I never saw him as happy as when he discovered that they were very interested in the figures and the colors.  Later he told me  about the picture, "I painted iit by oil light while dreaming of the sun. I see that in the sun it does not get damaged: children are the sharpest critics." "

Bolaffio is not so well known outside Italy as his teachers Giovanni Fattori and Giovanni Segantini or his friend Amedeo Modigliani, perhaps because most of his paintings are in Italian collections.  Several of them, including Spring with Swallows, are in the provincial museum of Gorizia. Born in 1893 into a family of well-to-do Jewish wine merchants in the border city of  Gorizia, Baloffio who was described by those who knew him as being gentle, generous, and quiet, seems a natural outsider.  His portraits of members of the local Jewish community are especially admired.

Vittorio Bolaffio died in Trieste the day after Christmas in 1931.  "He was a great artist - he dreamed of universal brotherhood" is the epitaph dictated by his friend the poet Umberto Saba for his tomb.

II. Born in Perugia (1949), Patrizia Cavalli lives in Rome. She has published three collections of poems, the first,  My Poems Will Not Change the World was published in 1974, followed by My Own Singular I (1992) and Always-Open Theater (1999).  "Even when it seems that the day" is  a representative poem, written in a fresh colloquial voice with Cavalli's use of enjambment intensifies her sense of the conditional  nature of  our perception of events.  In origin, enjambment is a French word meaning to step over and in poetry it occurs where most line endings are not punctuated and whose sense of movement steps over to the next line. Her lyricism have inspired some Italian critics to call her  "a modern-day Sappho."  Cavalli's translations of Shakespeare include Othello, The Tempest, and A Midsummer Night's Dream.

It is a beautiful place that I have visited several times and I will do it again when there is an exhibition that tempts me.

Tania, how lucky you are to hop in a car or on a train and go to these places. For us on this side of the Atlantic it takes a long and expensive and probably unpleasant plane ride.

Rouchswalwe, isn't this a beautiful work? Nothing else I could fin by this artist came close. Bolaffio surpassed himself and so can we all.