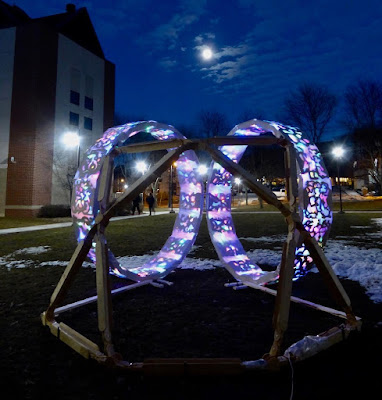 It's a spring tradition in Utica, New York.  Every class of  sculpture students at the Munson-Williams-Proctor  Institute Art School gets to participate in the making of the Equinox Bracelets, following a style of work laid down at the Bauhaus in 1920s Germany.  The students begin work on the project while they are freshmen and complete the fabrication during their sophomore year. The project is a joyful yet serious meditation on the recurring cycle of the seasons  and the symbiotic relationship between darkness and light.  The Equinox Bracelets will be on exhibit on the grounds of the Munson-Williams- Proctor Art Museum for two months following the vernal equinox.

The circles are constructed out of bent plywood left over from another project and stand ten feet high.  The colored lights are set inside  holes drilled into the wood.  The geodesic dome which holds the sculpture together was also built by the students.  Part of the frisson of working on the project comes from students working on discrete parts and then watching the work take shape as they put them together.

I have more about the city of Utica and the Munson-Williams Proctor Art Institute and some of their artworks by Arthur Carles, Norman Lewis, Henry Lee McFee,  and Bob Thompson

Sort of reminds me of the infinity symbol ...

I wish you could have been there to photograph this. I'd love to see what you would have done with it, Rouchswalwe.

Oh my goodness, you give me too much credit, dearest Jane ... now I'm thinking though ... !

You do know that I have what my mother used to call "an idiot camera," meaning a point-and-shoot!