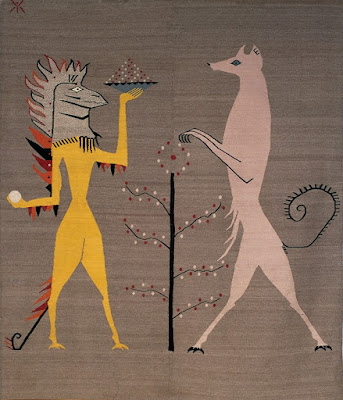 "Darling stop being philosophical it doesn't suit you, it is turning your nose red."
- Leonora Carrington, excerpt from The Hearing Trumpet (1976)

In the magical world of Leonora Carrington, humans and animals change places, try on each other's outfits; it is a world where metamorphosis is a cinch.  I should note here that Carrington often referred to herself as a "female human animal."  The tree decorated with red berries and white lights lends Iguana and Fox a festive air.  A half woman wearing the head of an iguana and a half man/ half fox regard each other over its ornamented top.  Is that a plum pudding she offers in her left hand and  a snowball she grasps in her right hand?  This may be Carrington's version of regional Mexican folklore that she delighted in using in her work or it may be one of her own creations, a feminist archetype for our times.

Leonora Carrington (1917 - 2011) was an English-born artist who made Mexico City her home.  There she made a series of tapestries with assistance from an Aztec family of serape makers.  Although best known for her surrealist paintings, Carrington was exposed to the beauty of woven cloth by her father, a successful textile maker.  She is also credited as a founder of the women's liberation movement in Mexico.

It is easy to dismiss surrealism as little more than a series of jokes with its pipes that are not pipes and its  bowler hat-wearing gentlemen caught in incongruous situations but the traumas and  the dislocations in the wake of the First World War (although no one knew it was only the first at the time) were enough to make a person refuse the reality that was given in favor of one that was self-created. 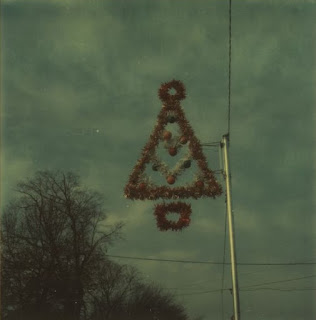 It is good to be reminded that a Christmas tree can also be a humble sign of hope and joy.   This photograph by the eminent American Walker Evans (1903-1975) is an instant color print and a fitting civic tribute to the joy that the beautiful evergreen fir tree conveys during this holiday season and throughout the winter.  By the way, tannenbaum is the German word for fir tree.