Landscape Into Art: The Light In Switzerland 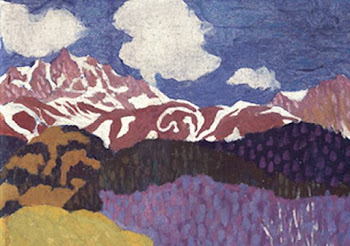 Eighteen forty-eight is usually remembered as a year of revolution in Europe; not so in Switzerland.  That year the Swiss Confederation was formed and, with three official languages taken from neighboring countries of France, Italy, and Germany, Switzerland seemed to inoculate itself against the excesses of 19th century nationalisms. In the event, the arts would provide the country its genius loci. A remarkable generation of painters emerged in the decades immediately before World War I  who remade the alpine landscape through  radical stylistic inventions. Most would complete their art studies away from home. 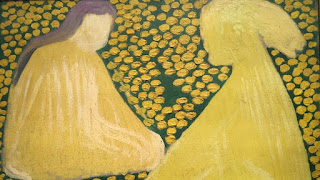 Giovanni Giacometti (1868-1933), the son of a baker in Stampa,  managed to enroll at the Munich  School of Arts and Crafts. There he became friends with Cuno Amiet (1868-1961), from the German-speaking canton of Solothurn where Amiet's father was the chancellor of the canton. The two friends decided to go to Paris where they enrolled at the Academie Julian but financial difficulties forced Giacometti to return home. Meanwhile Amiet joined the artist colony around Paul Gauguin in Pont-Aven; the experience convinced him of the primacy of color in painting.  At first his work was not well-received in Basel but he won a silver medal the Universal Exposition in 1900;  his work would remain grounded in French traditions, sometimes evoking the style of the Nabis, heavily influenced as they were by Japanese wood block prints. The Yellow Girls could have been a wood  block print as easily as a painting but as a painting it is completely modern.

After Paris, Giacometti found the isolation of life in Stampa unbearable and traveled south to Rome in 1893 where he had the good fortune to find a mentor  in Giovanni Segantini (1858-1899). Under the more experienced painter's influence he came to appreciate the  beauty inherent in the mountainous Swiss landscape.  During his lifetime Segantini was one of Europe's most famous painters.

Felix Vallotton (1865-1925) was born into a conservative middle class family in French-speaking Lasuanne. He arrived in Paris at the beginning of 1882, working as an art restorer and an art critic for a newspaper back in Lausanne. His paintings began to attract Swiss patrons at  he same he was experimenting with printing techniques. In 1892 he joined  the Nabis,  a Vallotton's landscapes are always spectacular,  their extreme simplification  through bands of bright colors curving and bending, expressive of movement in nature although not strictly representational. His painting style was influenced by his experiments with prints where line is a primary means of communication.

All three artists share an interest in the effects of light on a landscape of theatrical proportions, intensified by their imaginative use of bold colors.  These works are currently on view at the Musee d'Orsay in Paros as part of Swiss Modernities (1890-1914) from 19 May - 25 July 2021. 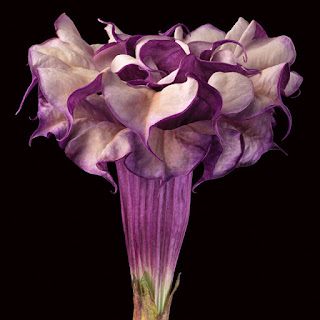 "the narcotic breath of beauty and bane" - Linda Marie Van Tassell
Datura goes by many names: thornapple, jimsonweed moonflower, devil's trumpet, hells bells
Lamb thinks of her flower paintings as portraits. "I often print my images very large to allow the viewer to delve into the 'soul' of the flower." Here she creates an image rich in chiaroscuro; the purple bloom has, as if by magic, soaked up all the available light.  The bundled strands of the neck erupt into a flamboyant flurry or ruffles, like old-fashioned crinolines. Purple Datura, typically of Lamb's work, examines the distinctive forms and colors of plants, "the amazing engineering that goes into plants." Inspired to train as a molecular biologist by her fascination with biodiversity, Lamb only began to study photography after her children had grown up.
Lamb grows most of the plants she photographs in her home garden in Bethesda, Maryland.  She relishes the opportunity it gives her to observe the life cycles of plants and to choose the perfect photographic moment. "I like the fact that there's a lot of nature that's not under my control, that in order to do what I do, I have to conform to the plant."
As an artist-scientist, Lamb is heir to a tradition that stretches  back to Maria Sibiyla Merian (1647-1717) who was an early, significant contributor to entomology as well as a scientific illustrator through the Canadian Mary Vaux Walcott  (1860-1940) who meet her geologist husband in 1913 while she was hiking the Canadian Rockies in search of flowers to paint.
Image: Amy Lamb - Purple Datura, 2015, digital print of a photograph, National Museum of Women in the Arts, Washington, DC.
Posted by Jane Librizzi at 12:10 PM 5 comments: