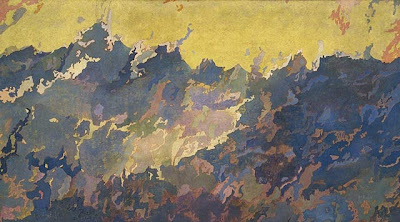 "If we cannot dedicate ourselves to his purposes, then clearly his work will look like nonsense."
That sentiment, from an introduction to an English translation of the German philosopher Martin Heidegger, comes from filmmaker Terence Malick.   The dream sequences in Malick's The Tree of Life (2011) show a vision of the creation of the cosmos that looks eerily like the paintings of Augustus Vincent Tack (1870-1949).

In recent decades, Tack's work has been neglected, associated  as it is with the unfashionable concept of synethesia. For Tack, colors made movement and emotion visible   Synesthesia was popularized through  the colored vowels of Arthur Rimabud's poem Les Voyelles and the paintings of Kandinsky.  For post-war painters, the very idea was anathema.But that may change as his painting belongs to  a third way in Western art,  one that harmonizes European and Asian techniques of visual representation.
As a young man, Tack admired the japoniste  works of John La Farge (1835-1910) above those of all other American artists, and extended the older artist’s use of the abstract and decorative properties of Japanese art in his own work.  Duncan Phillips saw it that way, too, writing that Tack’s work carried “forward the La Farge tradition in American painting."  His early works (Winter Landscape) were a mixture of late 19th century techniques but he began to paint the mystical landscapes his name is known by towards the end of World War I. They belong to a mystical strain  in American art that began with Albert Pinkham Ryder but they also point toward abstract expressionism.  Clyfford Still,  for one, admired Tack's paintings for their subtle harmonizing of colors and planes

During his lifetime, Tack was fortunate to have a sympathetic patron in the critic Duncan Phillips, who bought dozens of Tack's paintings.   When Phillips opened his eponymous museum, the Phillips Collection, in 1921, he commissioned murals from Tack for the museum, including a group of twelve lunettes from 1928-31 for the Music Room.   One of Tack's last works, circa 1943, was the panoramic Time And Timelessness, a fireproof theater curtain for the Phillips.  But having most of your work located in one place can limit your visibility, as the posthumous fate of Dwight William Tryon at the Freer Gallery (also in Washington, D.C.) illustrates.

Phillips often displayed Tack's paintings with photographs by the contributors to Camera Work.     And, in fact, Alfred Stieglitz had done something similar is his photographic series Equivalents.In 1928, Duncan  Phillips realized his dream of having a gallery  decorated with murals by Tack.   The space, a music room which had irregular proportions, was challenging.    Tack used all his favorite resources, including Catholic mysticism and Platonic philosophy.  During several trips to Italy in the early 1920s, Tack studied the Renaissance paintings of Giotto.  He also  responded strongly to encounters with old Roman mosaics.  Phillips was exultant at the result, calling it a "Hall of Cosmic Conceptions" , a place where the theoretical unity of life and art  became visible.
Tack  puts the constant movement of human eyes to work for his artistic purposes.  Some critics who dislike this,  have  called it  Tack's "distortions."   Even in his more conventional early works, Tack's landscapes  are more decorative than representational   His frequent use of the lunette, a half-moon arch was a conceit borrowed from architecture,  as a framing device, disguises the absence of traditional perspective.    Indeed, Tack's use of multiple perspective points gives the viewer a glimpse of something beyond restlessness, possibly even chaos, yet grounded in his emotional response to natural phenomena.
As the quote below makes clear, Tack expressed the inspiration for his painting in a language more romantic, more mystical than we are used to. He made impressive use of large, architectural designed spaces in service to his ardent conviction of the spirit's transcendence.  And yet, as he himself deepened his commitment to that expression, he painted in a way that speaks our visual language, a blending, perhaps premature, of the figurative and the abstract.  Tack, at his best, can take your breath away.

“Who has not watched the rhythmical serrations of sand, or snow -drifts blown by the wind, or wind blown clouds, or the reflections of leaves in the water, or patches of sweet fern growing on a hillside, or rain-stained walls or the the foliage of thick growing crops?”  - ( Augustus Vincent Tack, c. 1944. ) 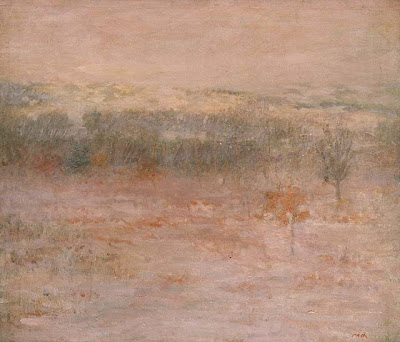 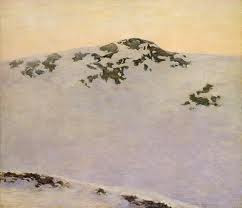 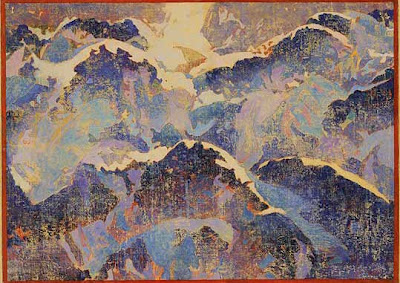 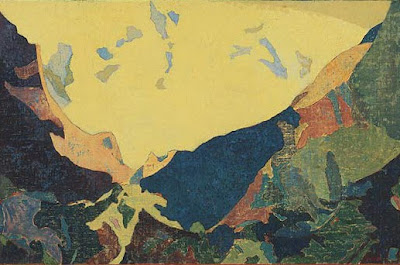 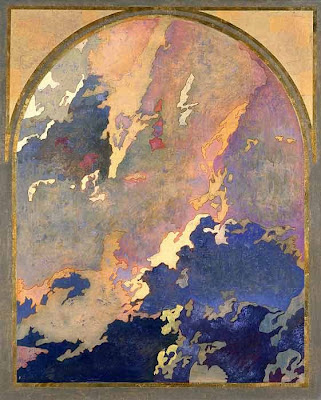 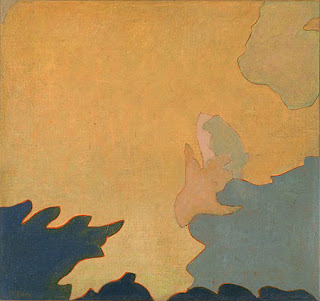 Oh my! I sense the old Roman mosaics. Alluring!

Rouchswalwe, it does look like marble, now that you mention it. Marble, another static thing that gives the appearance of movement.

Could you please provide a source for the final quote by Tack?

Hello, PD.
The Tack quote comes from one of (the many) entries on the Phillips Collection website.
http://www.phillipscollection.org/research/american_art/collection/collection-artist_t.htm

I posted this article before I learned how to link - but hten again - some people find it distracting. You are not one of them, so thanks for your interest.

Love this article! I have his painting "Canyon" hanging on my wall

Welcome, allmythoughts! I've never seen Tack prints anywhere. Lucky you. I recently removed the link list from my blog - not sure whether it's helpful or not. Maybe I should just do a list since there's a search box? How did you find Tack here?