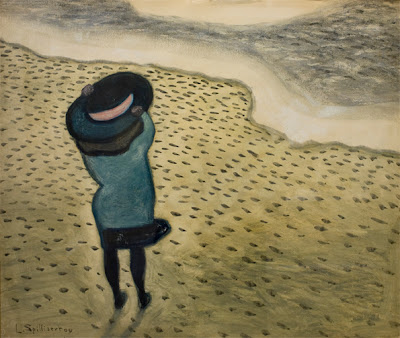 "I have always sought  perfection, and believe it or not,  perfection of  form. In any work of mine you will find a plastic form, viewed objectively and purely for itself, subject to the laws of light and shade, displayed with the limited resources of the 'modelé'... my art is limited to the capabilities of chiaroscuro." - Leon Spiiliaert, translation by J.L.

The beach at Ostend, Belgium is known for the phenomenon called 'blue apple, green sea,"  a trick of  light that makes  the sky seems to fall on the water,  changing the colors of sea and sand in the flash of an eye.


An artist  possessed of strange magic, Leon Spilliaert (1881-1946)  has often been regarded as a  creator of worrisome and even disturbing imagery.  Acknowledged  for his masterly use of gouache, pencil, India ink, and charcoal,  Spilliaert suffered from ulcers and a concomitant insomnia that made walk the dead streets and the eerily empty shore in front of Ostend's famously long promenade late at night.  On the evidence of the images, you have to put on blinders to miss his acute interest in the others who inhabit these spaces. Spilliaert's Fillette au grand chapeau (1909, Offa Gallery, Knokke-le-Zoute - above) dates from seven years before his marriage to Rachel Vergison and nine years before the birth of his daughter Madeleine, but the humor and even joy of the wind and the other elements is there already and in full.

Spilliaert's friend, the symbolist poet Emile Verhaeren, wrote that the silence of the night was so large that even the ocean listened.  In Digue la nuit  (Dike at Night) the verticals beams cast by the streetlights cut through the moist air  hanging over the embankment  something like what daylight does to the water, or so Spilliaert makes us see it. The Kursaal at Night, from the same year, 1908, can be viewed as either remarkably abstract (in retrospect) or as a surreal precursor to Giorgio de Chirico's  deserted plazas.

His figures are  enigmatic but more varied in their particulars than received opinion allows.  Some do appear as emblems of waiting, anxiety or loneliness (The Gust, Vertigo) while others like Les Postes and L'elevation are fanciful without being in any way sinister.  Balance La Baigneuese, a woman relaxing on the seawall with her little dog after a swim, with the the nightmare vision of a woman perched high over an undefined abyss, clinging to the stairs in fear of Vertigo.

In 1904, the year  of  The Gust, Spilliaert's work was exhibited alongside  that of Pablo Picasso at Galerie Clovis Sagot in Paris.  Yes, there are noticeable affinities with Fernand Khnopff, Edvard Munch, and Odilon Redon but  Spilliaert's work could stand all comparisons. His nocturnal scenes are highlighted by  splinters of light, delicately gilded  in pinks and blues; his pastels of fishermen, women walking dogs, or peasants camped on the piers, are expertly modulated in color chalks.
Spilliaert was a true Oostendenaar, a native of Dutch-speaking West Flanders.  He grew up in the coastal beach resort of Ostend where his family ran a perfume shop that catered to the many tourists attracted by the beachfront hotels. Yes, he read books by Edgar Allan Poe  and Nietzsche, as did so many of his contemporaries.   It provokes a smile to think of the diffident young Spilliaert following  James Ensor around Ostend, too shy to introduced himself  to the older, established artist, even though Leon's uncle Emile was a member along  with  Ensor of  the Cercle des Beaux Arts d'Ostende.  Ensor, now there was a man of seriously perturbing sensibilities. 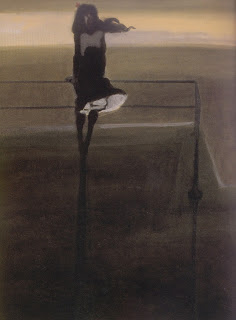 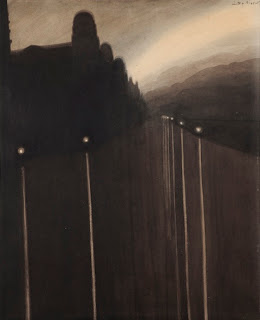 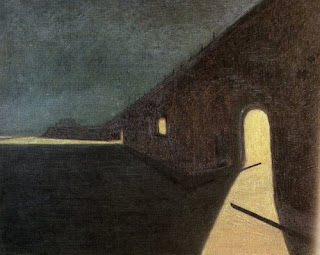 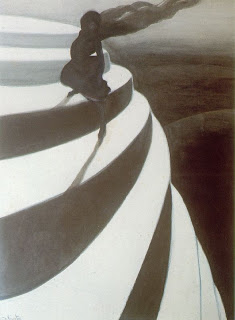 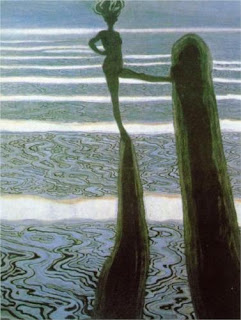 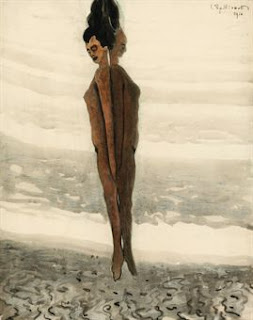 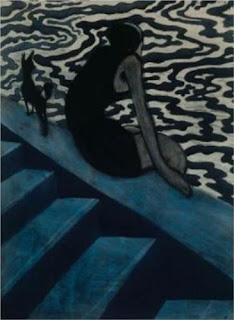 Just as compositions, these are so strong, before you get to all the subtleties of color and other elements you point out. He's particularly good at a figure in a landscape, seen from behind.

Neil, by all accounts Spilliaert did a lot of solitary walking. It's maddening to think of him following Ensor around the streets of Ostend and never having the nerve to introduce himself.
Unlike Ensor, though, he viewed people not just with foreboding. There's a lot of wit in his images - or at least smiling - in his work, especially of children and dogs.
No wonder there's a life-sized monument of Vertigo on the beach at Ostend.