Elizabeth Harrower: Under a Clamorous Sky 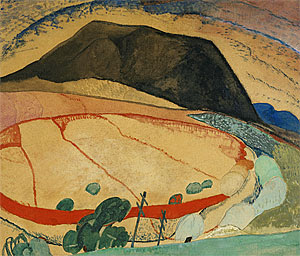 "You have a remarkable, sober acerbity, an almost historical view (the long prospect - I wonder) and the fragrance and nuttiness of the kernel, with the nutshell dispensed with...You are unique, a writer on your own and your future is, no doubt, a long prospect."

That fragrance is baked into the Australian landscape, a landscape often parched under a "clamorous sky" as Elizabeth Harrower put it.  Grace Cossington-Smith's Black Mountain was painted in the area known as Turramurra, near Sydney where Grace Cossington lived.  The word originate from the Aboriginal where it denotes a high hill.

Elizabeth Harrower and Christina Stead became friends when  Stead returned home to Australia from Europe in the 1970s.  Both writers created characters who prey on others within the supposed shelter of home. Although Harrower was then only in her forties, she had already stopped publishing books in spite of having written four well-received novels between 1957 and 1966.

The Long Prospect, published in 1958 was Harrower's second novel and her first success.  The novel exemplifies Satyagraha, a Sanscrit word combining satya (truth) an agraha (adherence, insistence) given by Gandhi to the practice of nonviolent resistance. "Man and his deeeds are two disctinct things.  Whereas a good deed should call forth approbation and a wicked deed disapprobation, the doe of the deed, whether good or wicked, always deserves respect or pity as the case may be." In Elizabeth Harrower's novels politics happens in the background because that is how it is in everyday life.  She delicately explores how public disparities play out in real lives.
Twelve year old Emily Lawrence has been exiled to a dismal factory town while her parents, Harry and Paula, pursue separate lives in Sydney.  Occasionally one or the other makes an appearance to do something vaguely parental.  "Just the same, it was immensely embarrassing to have a stranger as an intimate relation," the girl reflects. Emily lives in a boarding house run by her maternal grandmother Lilian who both neglects  and torments the little girl.

Lilian exults in other people's misfortunes so Emily's one bit of luck is that her grandmother mostly ignores her in favor of horse racing, gambling, and gossiping with her like-minded friends.  The boarding house serves as a respectable front for the lovers she ... from her boarders.

Emily has an uncommon sensibility,  painfully sensitive to the cruelty that her grandmother visits on her.  When Thea, a young woman  Emily has a crush on moves away abruptly, the girl is heartsick. Lilian taunts her mercilessly: "That's right!  Cry, cry, cry! Your bladder's too near your eyes, that's what's wrong with you, Emily Lawrence.  No wonder she wouldn't stay to say goodbye.  I don't  know who would."

Then a new boarder arrives.  Max is a scientist from Sydney: intelligent and kind-hearted, he sees that Emily is starved for friendship and adult attention.  He treats her as an equal as the two discuss literature and art and science. "Emily and Max had taken up a dialogue that had no end..."  Max encourages her to  dream of a future for herself.

Lilian is not pleased by their friendship.  She encourages others to see something unsavory between the two and she engineers Max's punishment by the  community, a trial by mob that drives him from the town.  Harrower uses her understanding of human motivation to build a scaffold as unbreakable as it is unbearable.  Yer Max has given Emily something precious -  the sense that her life matters.

In Elizabeth Harrower's novels politics happens in the background because that is how it is in ordinary life.  For Harrower  how public disparities play out in real lives is a major thread running through her novels..

Grace Cossington Smith (1892-1984) was among the first Australian artists to paint in he modernist style. Like Van Gogh and Crrzann she used bright colors in broken forms to suggest the natural world.  Paintings of mountains and hillsides were a frequent landscape for Cossington-Smith.