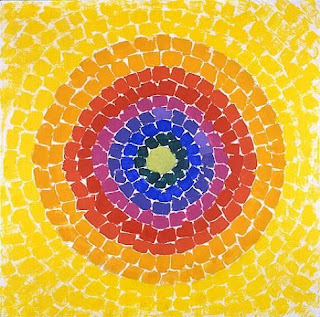 Manuals of Japanese brush painting include rules for how to make strokes; if that seems restrictive or inhibiting, just look at the paintings of Alma Thomas (1891-1978).  Like an instrumentalist whose diligence sets her free, Alma Thomas was able make Abstract Expressionism speak the joy of painting itself.  Even when seen in person where the brush strokes are the more vivid than in reproductions, the sense of movement seems redolent of joy, in contrast perhaps to the anguish viewers often find in the paintings of her contemporary Mark Rothko. Thomas experimented  with techniques and styles but when she arrived at Abstract Expression she used its means to shape feelings in paint, the definition of aesthetics.

When the Thomas family, mother and father and four daughters, moved to Washington, D.C., the segregation of the nation's capitol was a giant step up from the constant threat of racist violence in their home state of Georgia.  The first student to graduate with a fine arts degree from Howard University, Thomas supported herself by teaching art in Washington, D.C. public while she painted on the side. "I Never lost this need to create something original, something all my own." Thomas was not able to devote her full time to painting until she retired from teaching at sixty-eight. Even then it would take another decade before she received broad recognition.
About her late blooming career, Thomas had this to say: "I don't know how it happened, but it seems to me that I've conducted my life so that every time I came to a crossroads I took the right turn. I never married, for one thing.. That was a place where I know I made the right choice. The young men I knew cared nothing about art, nothing at all. And art was the only thing I enjoyed. So I remained free. I paint when I feel like it. I didn't have to come home. Or I could come home later and there was nobody to interfere with what I wanted, to stop and discuss what they wanted. It was what I wanted, and no argument. That is what allowed me to develop." Such clarity of purpose, expressed to an interviewer in 1977, still sounds revolutionary coming from a woman. 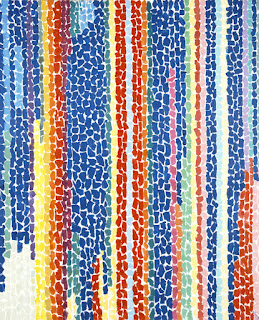 Posted by Jane Librizzi at 7:57 AM

I like her colors, Jane. (Yesterday I thought of you, you will see next week on T&P.)