Leon Bonvin In The Walters Museum 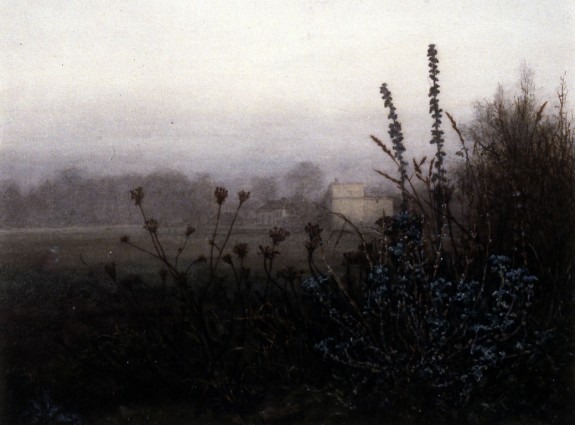 "He had the cold beauty of the morning or the heavy hours of the night in which to draw and paint his watercolors."

In five brief years between 1861 and his suicide in 1865, Leon Bonvin created a group of watercolors of such intricacy and luminosity that they vibrate with finely calibrated emotion to the viewer's eye.

What did it cost the artist emotionally to depict.the landscape that immured him poverty and obscurity with such tenderness? Leon Bonvin's life was divided between long hours working as an innkeeper and brief. periods devoted to drawing and painting.  His landscapes work as an expression of his situation;  his garden is populated by friends, while the larger world is viewed  with yearning. (A few years before the evening he painted Country Scene Bonvin had made a charcoal sketch of the yellow house with its distinctive profile seen here in the background at right.) 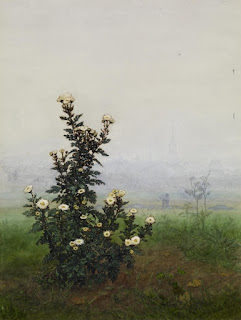 Everything is these paintings has been imbued with feeling as is early morning on the plain of Issy. Close by are  the fortifications of Paris, unwelcoming by design. Flowering Chrysanthemum is silhouetted against an untended  patch filled with wild carrots, grasses, and weeds.  In the middle distance a farmer stoops to till the soil, visible through a scrim of morning mist.  Beyond  houses and church spires are  rendered in washes of white, just on the edge of dissolving.

So far as anyone knows, Bonvin produced only one oil painting. The lack of means that prevented him from using oil paints confined him to the difficult and relatively unforgiving media of ink and watercolor, but we never register this limitation as a lack in Bonvin's work. He perfected a technique of outlining his forms in sepia ink, achieving  a clarity similar to that produced by photography.


Overlooked in his own time and forgotten after his death (just as Chardin had been before him) Bonvin's work was known to a small circle that included William T. Walters. whose son Henry Walters (1848-1931) founded the Walters Art Museum in Baltimore. William began collecting Bonvin's work (56 watercolors and one oil painting) while he waited out the Civil War in Europe and it constitutes the largest collection of Bonvin's in existence.  That these exquisite works came to Baltimore is a quirk of history. 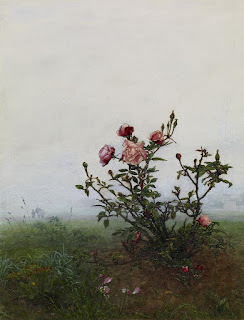 Baltimore, according to  woman who wrote to a  local newspaper in 1809, was "the Siberia of the arts." Apparently the brothers Rembrandt and Rubens Peale thought otherwise when they opened a combination art and natural history curio gallery there in 1812. However, even the considerable reputation of America's first family of the arts was not enough to guarantee success; after just a few years the gallery closed and the Peales moved on.

William Walters might never have gone to Paris, might never have seen the works of Leon Bonvin, if not for Baltimore.  The city sat near the fault line between north and south when the Civil War erupted in 1861. A successful grain merchant and liquor wholesaler, Walters' wealth was had been built on the backs of slaves. When war came, he took his mixed loyalties and his family to Europe.It may be that immersing himself in the French landscape Walters found an escape from trouble.  If so, it was temporary, as Leon Bonvin well knew.

How fortunate that these wonders were not lost to the mists of time ... stunning! Of all places, Baltimore!

Rouchswalwe, for this alone the Walters family deserve to have a museum named for them. Bonvin's paintings are beautiful: there's no better word for them. Glad you like them.