Leon Bonvin: From An Inn At Vaugirard 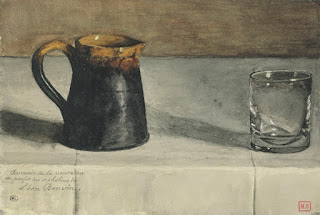 "Someone arranged them in 1600.
Someone found the rare lemon and paid
a lot and neighbored it next
to the plain pear, the plain
plain apple of the lost garden, the glass
of wine, set down mid-sip -
don't drink it, someone said, it's for
the painting. "
- excerpt from "Still Life" from Grace, Fallen From by Marianne Boruch, Middletown, CT, Wesleyan University Press: 2008 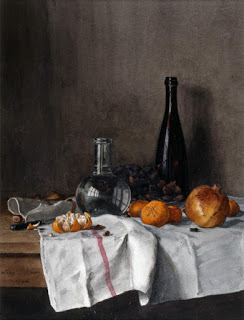 When I first saw Leon Bonvin's   Still Life with Glass and Jug on a Table  I immediately   thought   of Jean-Baptiste Chardin's Glass of Water and Coffee Pot (1760).  There is character in the mottled surface of the jug and radiance in the crystal clarity of the glass. There is a basic rule of composition that a long unbroken line parallel to the bottom of the picture creates a dead zone but his is ameliorated by the vertical creases in the table cloth.


There is evidence that Bonvin did know about the Parisian art world.  As the Louvre's collection swelled with Napoleon's plunder of other countries,  public interest in art grew.  The idea that art belonged to the people took hold and working people visited the museum that had been a royal fortress.  Chardin's work was being rediscovered in 1850s and 1860s when Bonvin was painting, and, like Chardin, Bonvin chose his objects for their intrinsic interest and not for symbolic reasons. The ultimate precedent for this type of still life were seventeenth century Dutch painting.

Philippe Burty wrote that Bonvin, who had to make time for painting at night, often drew using "a lamp enclosed in a box with a small opening as a light source, a practice that sometimes imparted a slightly acid color to the greens." 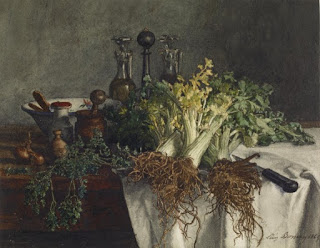 The makings for a salad, just picked from the garden, arrayed on the inn's kitchen table are a marvel of observation. His rendering of the intricate mass of celery roots and the medley of greens, yellow, and white of the leaves seems to draw the light. Around this central light-soaked image are onions, herbs, and pepper suggesting  warmth -  they are earth-scented.

One way to create reflections and highlights (particularly in oils) to go over the painted surface a second time with the same colors as Bonvin did here. The variety of materials used to complete this painting

Incredible!! For a second , after glancing through the blog pictures, I wondered whether those were photographs. All the paintings are incredulously intricate and meticulous pieces of work. The crystal clear glasses, creases of the tablecloth, and roots of the celery; all are amazingly detailed. No wonder both the painters are considered gems among artists.

Welcomoe, Andrea, and thanks for your comments. Leon Bonvin deserves to be included with other great artists of 19th century France, and that is saying something. I have listed all the materials he used because I think it shows how much attention and skill plus emotion he brought to his circumscribed world. And yet he sailed high over all obstacles. His life is poignant to us, but what art! Glad you like them.

Great work by the painters. I am in love with the paintings posted above. I am really wonderstruck to witness such exquisite ancient paintings. The intricate details of each of the painting seem to be amazing. One of my friends at music institute in Coimbatore used to draw realistic paintings of sceneries.

Hello, Anonymous. I agree with your sentiments. Bonvin's work is simply beautiful but never simply done. His thought and care are in every stroke. Baltimore is so fortunate to have such a collection of his work in one place,