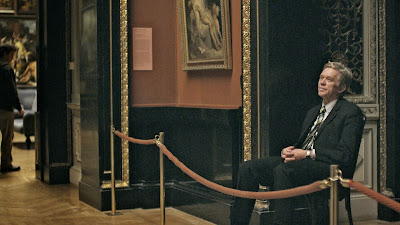 Vienna in winter is more than a picturesque backdrop in Jem Cohen's latest film Museum Hours; it is a participant in this hybrid of drama and documentary where its streets become animated paintings.  Cohen considered calling the film Museum, Ours out of his conviction, germinated in childhood visits to the Metropolitan Museum with his parents, that museums only come alive when visitors engage with their collections. Watching Museum Hours I sensed an erotic aspect to that relationship, as people see themselves mirrored in art.  Cohen's film is sophisticated but not cynical and his choice of another comprehensive museum  for his setting seems to be a love letter to the Met.

Located on the city's Ringstrasse, the Kunsthistorisches (Art History) Museum opened in 1891 to display the formidable collections of the Hapsburg emperors. The camera glides past the  museum's medieval and classical works, settling in on the early modern  Dutch and Flemish paintings that are the heart of the  picture gallery; paintings that were revolutionary in their time for making art out of everyday life.   And everyday life streams through the museum, too, in individuals and groups of tourists and schoolchildren..  Watching the spectators is Johann (played by Bobby Sommer, a musician and promoter at the Vienna Film festival where Cohen and his work have often appeared), a museum guard, sitting behind a velvet rope when not answering questions, a man who obviously relishes each moment. 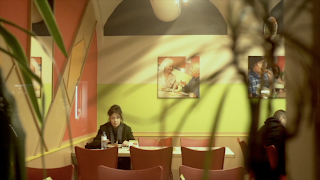 Entering the gallery one day  the film's second character, Anne (played by the Canadian singer Mary Margaret O'Hara)  appears.  She is not a tourist; rather she has been summoned to Vienna after her name was discovered in the address book of her distant cousin, a woman who now lies alone and comatose in a Viennese hospital.  Anne does not speak German and has little money to spare.  A person on whom little is lost, Johann senses that Anne is adrift and as they walk together through the galleries and talk about the pictures, he offers to act as her translator and advocate.  On this modest scaffolding the film unfolds. 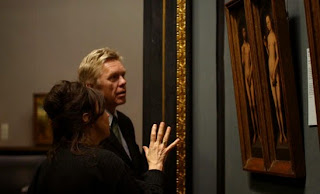 From Memling, Goya, and Velasquez, the two move on to Johann's favorite gallery, the Bruegel room.  Here is the largest collection of Breugels  in the world, including The Tower of Babel, Peasant Wedding, Winter, and The Conversion of Paul, the last three purchased by thean acquisitive Hapsburg in one year.  Bruegel's paintings are among the most complex expressions of humanism on canvas.  Dirt, poverty, misfortune, and arbitrary fate cannot extinguish the spark of happiness. The canvases are large and bursting with activity.  The camera travels like a human eye around each painting as a tour guide explains to a group that Bruegel's ostensible subject is never the whole story and is sometimes hardly noticeable, just as in life important events go unnoticed even when they take place in plain sight.  I was reminded of historian Robert Delevoy's wonder at Bruegel's eye: "a gaze so eager and ruthless." 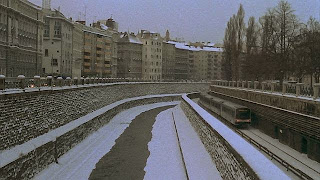 Although Johann is gay, there is a gently romantic quality to the relationship between these two.  Johann's deadpan humor as he recalls his younger days as a heavy metal musician complement Anne's  occasional bursts of singing.  They smile together at children who shed their boredom when they notice the museum's large number of paintings featuring severed heads and, again, at teenagers who perk up at the realization that some of these old paintings were the erotica of their time.  Where else can one contemplate a man's tender ass without being censured?  Underlining that point, Cohen includes a brief fantasy of the spectators, as naked as the characters in the paintings.  When Johann and Anne walk through the streets and stop at cafes, the flea markets and street vendors with their hodgepodge look like extensions of the museum.

Shuttling back and forth between museum and hospital, Anne's situation suggests an unanswerable question.  If art endures and life is short, is art timeless or does it transcend time, and what values does are implicit in such a question?  Museum Hours reminded me of Wim Wenders' Wings of Desire in a way I can't yet put my finger on but, still, that is a compliment.

Museum Hours was filmed at the Kunsthirstorisches (Art History) Museum in Vienna, using high-definition digital video and super-16-millimeter film. Cohen made  a virtue of  his low  budget and the resulting need to use mostly non-professional actors, getting outspreading works from cast and crew.

Jem Cohen has worked as writer/director outside commercial cinema, a sad comment on what's inside today.    Cohen has often  expressed his admiration for the French documentary filmmaker Chris Marker.  Cohen has also made a short film Anne Truitt, Working (2009) about the artist and Amber City, a film  about an unnamed city that is actually Pisa, Italy (1999). All three films are included on the Cinema Guild dvd release.

All images are still from  Museum Hours, distributed in the U.S. by The Cinema Guild.
Posted by Jane Librizzi at 12:03 PM

A great movie, with some amazingly framed and filmed shots. And even without that, just the chance to spend more time in that museum!

Tom, you are so right. Professional actors, much less "stars" would have behaved differently and distracted from the art. But Cohen makes the relationship between people and artworks the "star", if you will. And we get to see that grotto and the Ringstrasse, too.
I wonder if you've seen Aleksandr Sokurov's "Russian Ark"? It's a film about the Hermitage Museum. Theer's a link to an article about it under "Dispatches." I'd like to know what you think of that one, too. Thanks for your comment.

I saw "Russian Ark" in Chicago when it came out. The line was very long. I thought the line might be for the Noam Chomsky documentary playing in the other theater, but no - they were all Russians. It was the perfect audience!

Compared to "Museum Hours," Sokurov does not give the viewer as much time to merely look. Cohen makes you look.

But the Russian movie is more about history, so it flows along, while the Austrian movie is about art, so sometimes it stops.

Tom, if you haven't seen Cohen's "Amber City", you can find it on the dvd with "Museum Hours." It's about a half hour and it's very interesting - more mysterious than "Museum Hours" or perhaps I should say more withholding of information until the end.
"Russian Ark" is one movie I wish I could see on a large screen. Even on my laptop, it was overwhelming>