This is an artwork based on the infamous butterfly ballot from the 2000 Presidential election that threw the Florida ballot count into question.  Those holes, the ones that are punched through, were called hanging chads. Whoever created this image deserves to be applauded.  Unfortunately, I have been unable to discover its creator. 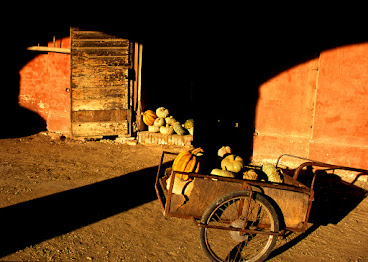 "Glory of expanded noon
when the trees give up no shade,
and more and more the look of things
is turning bronze, from excess light.
Above the sun - and a dry shore;
so my day is not yet done"
the finest hour is over the low wall
closed off by a pale setting sun."
- "Glory of Expanded Noon" by Eugenio Montale, translated from the Italian by William Arrowsmith, from The Collected Poems of Eugenio Montale, edited by Rosanna Warren, New York, W.W. Norton: 2012.
The first thing we notice in this photograph is the imperious quality of the light, the sun as master stage-crafter. Arches that we cannot see give the effect of proscenium arches silhouetting an open doorway and a cart full of harvest produce, pumpkins and squash. The door, the cart, the earth, and the terracotta walls just happen to be the palette we associate with autumn. And we have seen this light in Angela Prati's photograph before in the paintings of Italian painters. 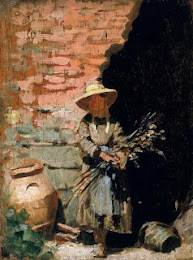 There is a quality to light in the paintings by the 19th century Italian artists called I Macchiaioli that appears abrupt, as definitive as a spotlight trained on a stage.  It is as unlike as possible from  the blurriness and deconstruction of objects in paintings by the French Impressionists.  When this light reappeared in the paintings of Giorgio de Chirico around 1910, the artist decreed a new movement - the scuola metafisica - where stillness and emptiness spoke louder than words could. In their paintings the Macchiaiolli let macchia (patches or spots) of contrasting colors determine the composition, a practice on display in this contemporary photograph by Angela Prati and also in the painting Peasant Woman in the Sun by the short-lived Florentine  Guseppi Abbati (1836-1868) whose life was cut shot when his dog Cennino, infected with hydrophobia, bit im.
Angela Prati was born at Piacenza and divides her time between Milan and Trento.  She has traveled around Africa in a Land Rover, As well as writing for magazines and newspapers both Italian and intternational, Prati took the photograph's for Trentino: The Enchantments of Art and Nature (1987) and Alvisi Zorzi's book Luce di Venizia (The Light of Venice) (1989) among others. Pati has specialized in anthropologic research photography, focused on peoples and cultures that are often overlooked.  In 2015 she was chosen by the Alinari Archives of Photography in Florence to interpret travel photography for their new project Alinari Contemporary
For more about the Macchiaioli go here and here and here and here.
Images:
1, Angela Prati - Mantova (Mantua), photograph, Alinari Archives, Florence.
2, Giuseppe Abbati - Peasant Woman in the Sun, oil on canvas, Pinacoteca Provincale, Bari
Posted by Jane Librizzi at 2:01 PM 2 comments: 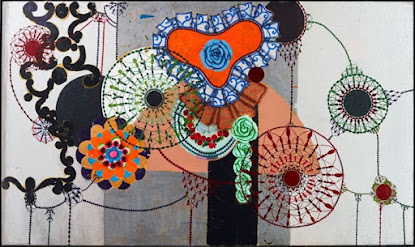 "Once in a while poetry comes slinking by to be possessed. later she slips away disappears as if her home were on the far side of the moon." - Li Po& Company" by Salgado Maranhoa, translated from the Portuguese by Alexis Levitin, The High Window Press: 2017
At the center of  Fleur de la  passion - Marajuca are roses in colors that  we don't associate with roses - baby blue and mint green and an embroidered heart enmeshed in a clockwork series of spinning disks and stray bits of trailing spider web.  It is the energy that emanates from these colorful shapes that enchants; it is difficult to turn away from a Beatriz Milhazes painting, so obvious is its vitality and beauty.  Beauty as a fit subject for art has been out of favor for five decades now; conceptualism rules the stage.
"Where there is a fishing net there is lace," is a long-lived Brazilian folk saying. Lacework was introduced in Brazil when immigrants arrived from Portugal and from the Azores and Madeira islands in the 17th century. The female lace makers or rendeiras were the wives and daughters of fishermen who settled along the northeastern coast of Brazil. That is still the case today.  Intricate  interwoven patterns dazzle by the skill with which they are executed -  words that describe the  lace maker's creations also fit Beatriz Milhazes. A Milhazes painting may be determinedly flat, yet it bursts with kinetic energy.
Milhazes, born in 1960, is equally comfortable including elements of modernist art with Brazilian folk arts from the favelas. Always keen to explore contradictions, Milhazes has introduced  the  culture of her country's  poorest residents into  pictures that hang in the country's - and the world's -  elite museums.
Milhazes developed her own process for picture-making that combines elements of monotype (drawing or painting on a smooth non-absorbent surface) and collage. She paints motifs on a translucent plastic sheet that she glues to a canvas. When the paint has dried she peels off the plastic, leaving a reverse image superimposed on the canvas. As some portions of the image are lost or overlap each other the effect of a palimpsest becomes visible. She likes the way that this technique minimizes the visibility of the brsh strokes, thus injecting a softening element to the image. The results are audaciously colorful but never hectic, thanks to the artist's use of a grid as the basic rational structure of each painting. Milhazes herself has said that she does not create "peaceful surfaces," a preference she attributes to the bold blue ocean and lush greenery of her native city, Rio de Janeiro.  She also says that she knows when a picture is finished when the colors and the structural elements reach equilibrium.
Image: Beatriz Milhazes - Fleur de la passion- Marajuca (Passion Flower), 1995-1996, acrylic on canvas, James Cohan Gallery, NYC.
Posted by Jane Librizzi at 2:42 PM 2 comments: