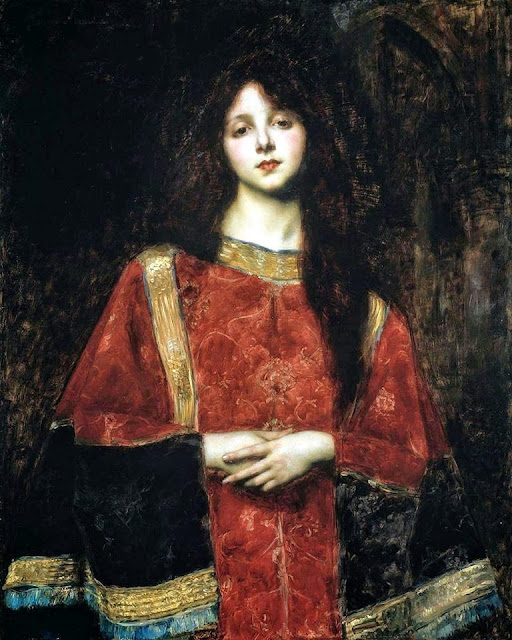 This Joan of Arc is not the thirteen year old peasant girl who heard angelic voices urging her to lead an army in battle during the Hundred Years' War.  Yet she is magnificent and possessed of a sense of  her destiny as Joan certainly was.

Superficially  then,  a typical Academic portrait of a historical figure in the tradition that brought us  George Washington as a toga-clad Roman figure wreathed in a crown of laurels.  Her heart-shaped face and sloe-eyed stare, the sumptuous gilt and velvet robe, are the stuff of Pre-Raphaelite fancy.  Her dark cloud of hair blends into an amorphous background punctuated by bits of religious symbols. But look closer at the robe she wears, painted with a hint of japonisme by way of French Impressionism.  Gilt at collar and cuff is set off by equally brilliant turquoise, separated from the third primary color, (here blood) red by inky thick blackness. Through her virtuoso display of textures Romani reveals her encounters with the early Impressionist techniques. Romani's style also harmonized elements of Aestheticism with her classical academic training.  A medieval- looking robe of red velvet   scored with designs of tiny flowers and fleur de lys (flower of lily) is both a symbol of French royalty and was also worn by Catholic saints. 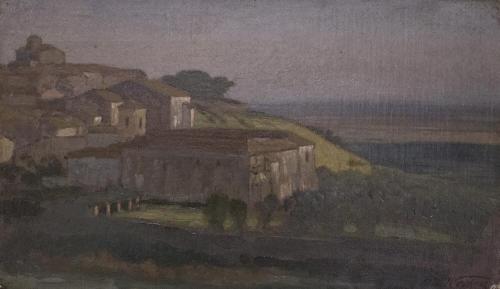 Juana Romani wat born Carolina Giovanna  Carlesimo in Velletri, Italy in 1867.  When her mother's affair with a prominent local landowner, Temistocle Romani, was discovered, Carolina's father burnt down one of Romani's stables and was found dead under mysterious circumstances.  Taking the girl, the lovers  fled to Paris, settling in the Latin Quarter in 1877.  In time the little family was impoverished and young Carrolina began to model for many of the artists in the quarter.  In 1882 she posed for Alexandre Falguiere, a friend of Ana Hyatt Huntington about Huntington, more below).  ONe was Jean-Jacques Henner with whom she had  a brief affair.  At nineteen having seen enough of the art world, Carolina decided to become an artist herself and changed her name to Juana, the Spanish equivalent of her middle name.  Filippo Colarossi Founder invited her to study at Academie Colarossi, one of the few schools at the to admit women.  When she exhibited at the International Exposition of 1889 in Paris, Romani was awarded a silver medal.

Romani became friends with Antoine Lumiere when she taught him to paint, an his sons, Auguste and Louis accompanied her when she visited Velletri in 1901.  The brothers generously donated one of their movie projectors to the city, which returned the compliment by naming their first cinema Cinematograpgo Lumiere in honor of the pioneering movie camera the brothers had patented in 1895. On this same visit Romani donated a sum of 5,000 lire to the art school to support an annual prize for a deserving student.  The school was renamed  the Juana Romani School of Art in 1905.

From artistic success, Romani's life began a downward slide, prejudice against female artists, savage reviews, and her mental frailties led to her commitment to an asylum in Pars where she died in 1924.

Around the corner in the Shaffer Art Galley from Juana Romani's portrait of Joan of Arc stands Anna Hyatt Huntington's bronze statue of the little warrior saint.  The original has stood at the intersection of Riverside Drive and Ninety-Third Street in Manhattan since its dedication in 1915.  The marble pedestal contains fragments from the cell in Rouen where Joan awaited her execution in 1431.

Huuntington's Joan is an austere, prayerful figure, with cropped hair.  Much closer to what the historical record suggests and certainly familiar to viewers of  Renee Jeanne Falconetti's mesmerizing performance as Joan in the 1928  film by Carl Theodor Dreyer, a landmark in film, silent or otherwise.  Falconetti was filmed from the neck up only, a sculptural gesture intensifying our sense of her spiritual struggle.  Huntington's bronze captures something of that in stop-time.  Whether we  think that restoring Charles VII of the House of Valois to the throne of France was a mission from God or worth the life of a remarkable young woman we can admire her for staring down the destiny she chose.
Anna Hyatt Huntington (1876-1973) was one of the foremost sculptors of her day, recognized internationally, with a Chevalier of the Legion of Honor from France and the Grand Cross of Alfonso XII in Spain to her credit.  Anna Hyatt married Archer Milton Huntington, poet. philanthropist and translator of the medieval  Spanish epic El Cid Campeador in 1923. Huntington had founded the Hispanic Museum of New York City and the couple made its expansion their joint adventure.