Hilary Mantel: Stories Of Her Youth 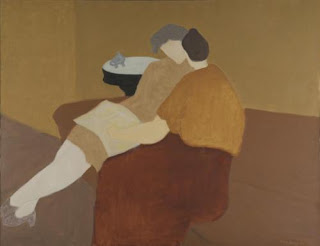 Learning to Talk, originally published in Great Britain in 2003, is likely to be  the last book we will ever have from Hilary Mantel. Mantel died suddenly in September of 2022. Her publisher described her, accurately I think, as one of Britain's greatest novelists.

In her introduction to this new edition, Mantel gives us to understand  that the stories  sprung from her memories if her own childhood in a northern England "scoured by bitter winds and rough gossips tongues. "All the tales arose out of questions I asked myself about my early years. I cannot say that by sliding my life into a fictional form I was solving puzzles - but at least I was pushing the pieces about"
The rigid class structure  that governed  postwar Britain makes itself felt early and often, The little girl is sent to elocution lessons because " I hadn't learned to talk proper."  "(E)veryone was policed by gossip," she remembered.
"Curved is the Line of Beauty" concerns her mother's new boyfriend Jack Mantel who comes to live with the family is "your definition of a man, if a man was what caused alarm and shattered the peace."
Her mother defied the conservatives mores of that time and place by living  for a time with two men, two more than her Catholic religion would approve. "Mercy was a theory I had not seen in operation. I had only seen how those who wielded power extracted maximum advantage from every situation."Then when Hilary was eleven the family, except for her father, moved away to escape the local gossip and Hilary never saw her father again.
.
Mantel's descriptive powers are deceptively simple. She describes a neighbor girl as "meager like a nameless cut in a butcher's window;" a missing pet is "only my stepdog." Or this, "(W)e continued to live in one of those houses where there was never any money, and doors were slammed hard." Words that stay with the reader.
Image: Milton Avery - Poetry Reading, 1957, oil o canvas, Munson Williams Proctor Arts Institute, Utica
Posted by Jane Librizzi at 4:38 PM 2 comments:

Raymond Han: The Many Shades of White 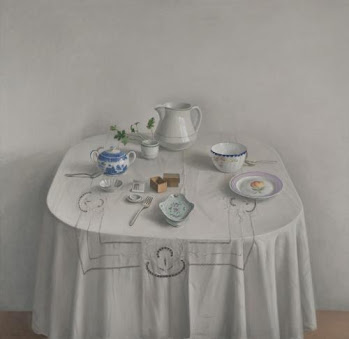 "Look how white everything is," Sylvia Plath marveled in her poem "Tulips." That's what I think when I look at paintings by Raymond Han. Of course these shades of white contain colors as you will know if you have ever watched white paint being mixed in a store.

An embroidered cloth  gives structure to the china arranged on the table. A cream pitcher is the focus of the picture. A blue and white teapot is decorated with japonisme; opposite is a Japanese cup. Greenery in a small cup is a touch of unruly nature in the midst of order. A spoon, a fork, a desert plate, and a few other small items complete the tea table. Why does that teapot seem subservient to the cream pitcher?

I have looked at Still Life with Rose Geranium in person several times. Fittingly, a print of it hangs  in the Terrace Cafe at  the museum. It was my introduction to Raymond Han whose bravura handling of shades of white is the signature of his still work. A gentle version of photorealism, in contrast to the sharp edges in the work of Janet Fish or Richard Estes.

The term still life appeared in late 16th century Netherlands; in French it is nature morte or 'dead nature'.  Intriguingly, the objects in a still life often appear to have individual personalities.

Raymond Han was born in Honolulu, Hawaii and lived near Oneonta in upstate New York for several years before his death in 2017. Han was one of seven children born to Korean immigrants. First he earned a scholarship to the Honolulu Museum of Art; then he moved to New York City where he studied  at the Arts Students League. 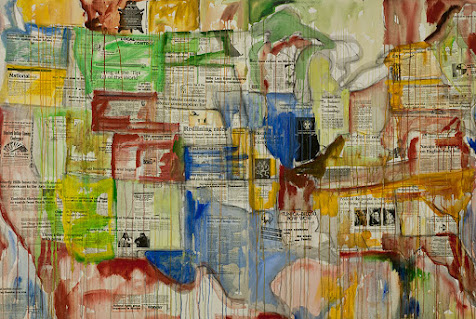 When she was a little girl her father would draw small pictures of animals for her to carry with in her pockets. It was so enchanting that she decided to become an artist when she grew up.  But when she got to college, a professor told her that women could not be artists. Fortunately, she ignored his advice.

For Smith, painting is a meditative process. Satire is a tool she uses to highlight stereotypes about American Indians. "My art, my life experience, and my tribal ties are totally enmeshed. I go from one community with messages to the other, and I try to enlighten people." As an example, in one painting of the country she removed  the names of states except those American names - 27 of them when translated into English.

Jaune-Quick -to-See Smith (b.1940) grew up on the Flathead Reservation in Montana. She is a member of the Salish and Kootenah Nation. She earned an MFA in Visual Arts from the University of New Mexico.  Her work has received numerous awards over the years,