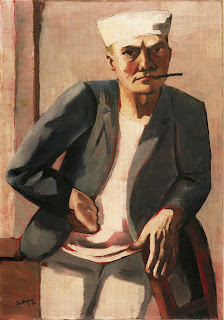 "...viewing a human face sets off a unique reaction in the human brain. This chemical reaction, not unlike addiction, occurs when we see a face or expression that pleases us, giving us a feeling of well-being. From infancy through old age, we are responsive to human features, sometimes with ambivalence, but always with meaning. " - anonymous collector

A.C., as I think of him (and his wife) are the anonymous benefactors who made possible a jewel-like  exhibition of portraits of all sorts at the Herbert Johnson Museum at Cornell University.  A small gallery suited the fifteen works, lending an intimacy to the experience even when, as is probably the case with a first century bust of Ptolemy of Mauretania, the intention was ceremonial.   Works of human revelation and contemplation, rather than formality and each one intended for the attentive viewer. 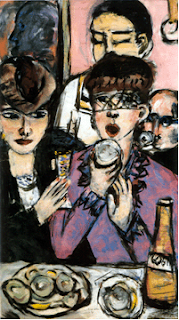 Four paintings by the German artist Max  Beckmann (1884-1950) are the centerpiece of the exhibition and suggest the qualities the collectors look for . A contemplative image of the artist's second wife Quappi, one of his friend the Alsatian engraver Sabine Hackenscmidt, and the two reproduced here.  A fiercely thoughtful gaze aimed straight at the viewer belies the height of his successful career, and hints  at the middle-aged Beckmann's attempt to understand the mystical aspects of life.  The Oyster-Eaters provides a challenge of another sort.  Quappi Beckmann lifts the oyster to her lips as Sabine Hackenschmidt looks on, eyebrow arched enigmatically.  A white-jacketed waiter stands behind.  What is last-noticed is an ominous gray face looming in the background that seems to represent all that came after the pinnacle of 1926 for these people.  The Nazis removed Beckmann from teaching and his works from museums, only to abuse them in displays of "Degenerate Art."   Years of living in poverty in Amsterdam efr the Beckmanns ended only when World War II ended. 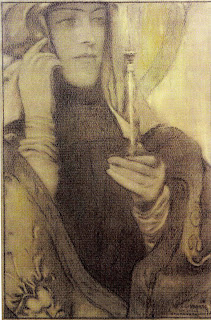 This version of Incense by Belgian artist Fernand Khnopff (1858-1921)  was made ss a present for  his niece Gilberte Freson on the occasion of  her marriage in 1917.  The better known version  from 1898, which is at the Musee d'Orsay in Paris .  A more intimate and personal vision, a close-up rendered against a neutral background, the priestess seems younger and more approachable - fitting for a wedding gift. 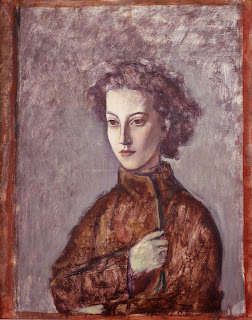 Balthus (1908-2001) often created images of young girls that are erotically charged.  Not so his Portrait of Rosabianca Skira, daughter of the renowned art published Albert Skira.  Balthus, the son of a Russian Jew,  fled the Nazi occupation of France during World War II for neutral Switzerland.  There Skira gave him employment on his new magazine Labyrinth.  The border painted around  the picture suggests a window sill, the  girl's arm  resting there.  She looks toward her future, which neither of us can see, with apparent calm, or perhaps the privacy of adolescence. 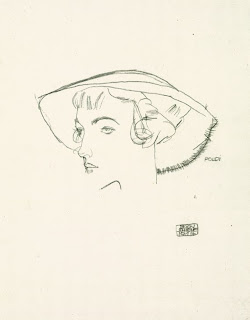 As with Balthus, so with Egon Schiele (1890-1918), it is the expressive faces that have joined this collection: Schiele's patron Karl Otten, Chief Inspector Benesh, and his frequent model Poldi, absorbed in thought.  Only in his clenched Self-Portrait does Schiele express the torment that we think of when we think of his work.  The arms, held tightly to his sides, are as expressive of emotion as the sound we imagine we hear coming from his mouth. 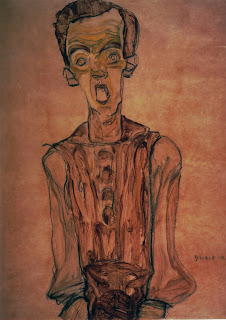 I've been here for one half minute and will never leave. You don't need to explain.

Welcome, Brian. I wish I had been able to see this exhibition at its beginning rather than just before it closed. It was a surprise but the Johnson Museum does this kind of thing so well.