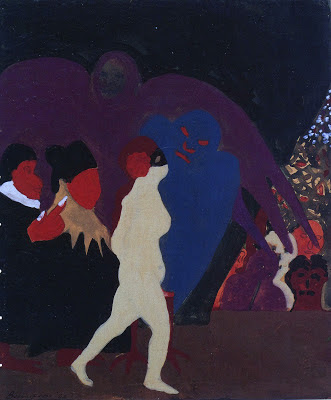 Stagedoom, painted in 1962, the year Thompson visited Spain, exhibits a marked understanding of  the painful road to womanhood with its potential for physical and emotional violation.   In Goya's acerbic prints, Thompson recognized "the common prejudices and deceitful practices which custom, ignorance or self-interest have made usual " he had experienced during his Kentucky childhood.
Among his some 1,000 paintings many were his reinterpretations of  Renaissance artists and late 18th century French painters; favorites he returned again and again included Tintoretto, Poussin, the aforementioned Goya, and Manet. By this method.\, Thompson was able to create a hallucinatory landscape where a black man could assess a white world
In an alternative  history of post-war art the paintings of Bob Thompson  would occupy a prominent place. Only twenty-eight when he died from a heroin overdose, Thompson (1937-1966) left behind more than a thousand paintings and drawings.  Born in Louisville, Kentucky, Thompson studied art at university there; his most influential professors were refugees from Nazi Germany. Through them came to appreciate  German Expressionist art of the early 20th century with its distortions of form and color used to express emotion; their influence is there to be seen in Stage Doom.
Based in New York during the 1960s when the city was the center of the art world, he frequented the Five Spot jazz club where he met avant-garde jazz musicians Ornette Coleman and Charlie Haden, whose likenesses appeared in his paintings. He also took part in 'happenings' with fellow artist Red Grooms; it was at this time that Thompson's paintings took on a theatrical aspect.
Stagedoom  also shows the influences of Abstract Expressionism and  the  saturated colors of Pop Art.  Unlike Andy Warhol, whose appropriation of advertising images constituted a poke in the eye to all but a knowing few when they were made, Bob Thompson worked in utter, bold seriousness.   The artists he revered, Piero della Francesca, Titian, and Nicolas Poussin, all masters of classical European art,  gave him a symbolic vocabulary.  Their compositions provided Thompson a ready scaffolding for his technicolor nightmares of human and animal  interactions,   illustrating the varieties of human folly, as Goya had. 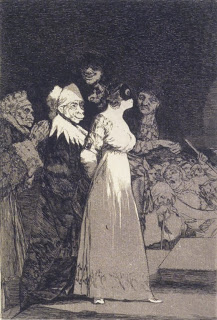 Posted by Jane Librizzi at 1:25 PM No comments: 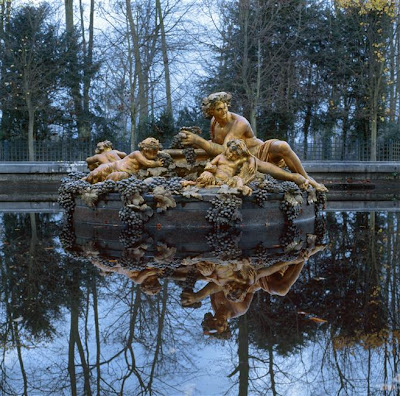 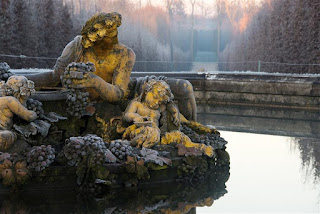