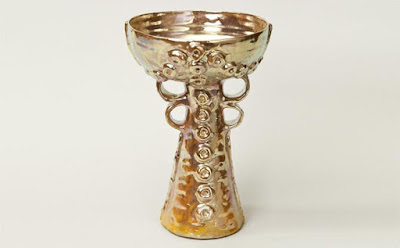 "I never meant to become a potter.  It happened very accidentally ... I could sell pottery because when I ran away from home I was without any money. And so I became a potter." - Beatrice Wood

You could say a chalice is a drinking glass with pretensions.  But Gold Chalice by Beatrice Wood is truly gorgeous. Raising the vessel on a footed pedestal as Wood does gives it a sacramental air. It also shines with one of the lustrous glazes that became a Wood trademark. The plastic nature of the raw  clay makes for a variety of form limited only by the skill of the maker. Wood's technical skills were good, she threw her pieces on the wheel,. but she prized the inclusion of  organic and even irregular elements with ancient sources  A Wood vessel may be whimsical, bizarre, even preposterous but is always breathtaking.

Beatrice Wood (1893-1998) was born in San Francisco to a wealthy family but after the earthquake of 1906 the family moved to New York where Beatrice became enamored of the theater.   Her parents opposed her ambition but finally allowed her to study painting in Paris as she was already fluent in French. So at age nineteen Wood fled a stultifying life at home; arriving in Paris she studied drawing at the Academie Julian and then acting at the Comedie Francaise.

The outbreak of war made transatlantic travel dangerous so Wood stayed on in Paris where she performed with a French repertory company from 1914 to 1916. She became interested in Dada when she met Marcel Duchamp and his friend Henri-Pierre Roche.  The three became involved in a love triangle.  Roche published a novel Jules et Jim in 1956 that was made into a film in 1962, directed by Francois Truffaut.  Wood identified the members of the real-life triangle, but the romance of the idea that Wood was the woman has proved to be a sturdy myth. While in France, Wood was nicknamed "Mama of Dada" for her love of  all things bohemian.

Wood's career as a ceramicist began in her  forties and grew from a small seed;  she wanted a teapot to match a set of teacups she had purchased while in  the Netherlands.  So she enrolled in a class at Hollywood High School where she soon realized that, despite her optimism, she was "not a born craftsman."  She never did make that teapot but in just a few years Wood had rented a small shop on Sunset Boulevard to sell her pots. By 1947 she had exhibited at the Los Angeles County Museum of At and the Metropolitan Museum of Art. A daredevil as a ceramicist, Wood often tossed chemicals - including mothballs! - into her kiln just to see what  effects

Her autobiography I Shock Myself, published in 1986, is downright cheeky.  She was encouraged to write it by her friend Anais Nin.  "I owe it all to chocolate and young men," Wood wrote.

Wood continued to work in her studio until she was 104. She died nine days after her 105th birthday in Ojai, California where she had lived since 1947.

Another artist you show me, Jane! I’ll get some more of her work.

Tania, this gold chalice is from the collection of the National Museum of Women in the Arts. If you ever get to Washington, DC you would enjoy a visit. In the meantime you can do a visit online at www.nmwa.org.

Thanks for the link, Jane. So much museums in Washington, we didn’t have time to visit that museum.