The White Roads of Provence: Colette in Summer 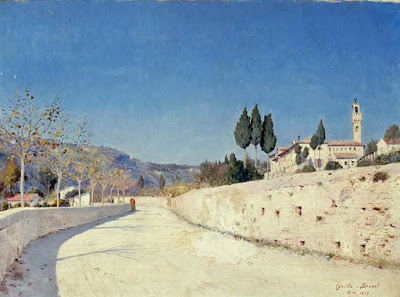 Is geography destiny?  A weighty question for a late summer day, with no easy answer in sight.   In her writing, Colette she relishes the natural world in all its antique pantheism.  How good a writer was she?  When the devout Catholic Francois Mauriac was awarded the Nobel Prize for Literature in 1952, the first call he paid was to Mme Colette at her apartment on the Palais-Royal; he wanted to assure her that the wrong person had won the prize!

It is impossible to avoid the word idyllic in describing the writer Sidonie-Gabrielle (1873-1954) Colette’s life at Treille Muscate.   Up at dawn she moved through  dewy grass to weed her tomatoes, then walking through the woods with her cats, returning to the house for a breakfast on wild figs: “ green ones, with yellow flesh, white ones with red flesh, black ones with red flesh, violet ones with pink flesh, mauve rather than violet, with a fine skin.”

In 1924, Colette was  divorced from her second husband Henry de Jouvenel, a Parisian journalist and publisher,  after  Colette's affair with her seventeen year-old stepson, Bertrand de Jounevel, became the stuff of Parisian gossip.   They had been an unlikely couple: she was the daughter of a working class family from a small town in Burgundy, an author of louche novels of manners, and a stage performer; he was the son of French nobility.

Looking for a respite, Colette spent a fortnight spent at La Bergerie, a villa near Cap-d'Aire on the Mediterranean, a place she had previously dismissed as “ pretty and false.”  She was attracted by the proximity of her friends from the theater who gathered at  nearby Saint-Maxime but the deciding presence  was that of Maurice Goudeket, her new young lover.  In just a matter of months, Colette changed her mind,  “What a country!  I don't want any other.” 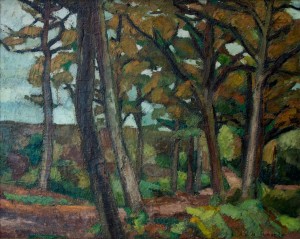 With help from the painter Andre Dunoyer de Segonzac, Colette found her own place, a small farmhouse near Saint-Tropez that had no plumbing or electricity but did have two and a half  picturesque acres of grape vines and fig trees,  and a path through the pines to the sea.  She named it La Treille Muscate (The Grape Arbor).  Soon after the move, Colette wrote two of her finest books there -  The Last of Cheri there in 1926 and Break of Day  in 1928.  After reading Break Of Day, Henri de Jouvenel's complained, “But can't you write a book that isn't about love, adultery, semi-incestuous couplings, and separation?  Aren't there other things in life?”   The lack of sympathy that had grown between them was never more obvious.


For answer, consider this passage (from page 30):  “Autumn is the only vintage time.  Perhaps that is true in love, too.  It is the season for sensual affection, a time of truce in the monotonous succession of struggles between equals, the perfect time for resting on s summit where two slopes meet....” 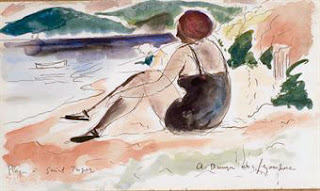 As a young girl studying French, I devoured every book by Colette that I could find, translated by Roger Senhouse, published by Farrar Straus & Giroux.    What I found there was puzzling:  a writer who claimed equal rights for the sensuous with the intellectual, yet seemed out of sympathy with my nascent feminism.  No better argument in favor of reading things before you are ready for them exists.   These paragraphs from The Evening Star, picked at random, are exemplary.


'All among my collection of paperweights, tight-stuffed with curlicues, burnt sugar twists, flowers and small insects, Marcelle arranged her round, impeccably re4d tomatoes, with never a crease or a rib on them, the last tomatoes from her Saint-Cloud garden, and with a sigh murmured " Yes it is compulsory.  Because they are good."

"On each successive day following the first fully ripened fig of the second crop, you can count on any number up to a dozen "secondary figs" being ripe and ready to fall into your hand, soft, with inflexed necks, bearing the pheasant's eye mark at their base and on the sides the parallel stripes that crackle their tender skins of mauve and grey.   For the first few days you'll not be able to eat your fill.  There's little to be said for your appetite if you can't polish off six, ten, or even a dozen figs with the chill of night still upon them; they readily split apart and are red inside as a pomegranate.  They are not as yet runny with their full measure of honey-sweet stickiness, and are so much the easier to put in the mouth.

"But the figs multiply with the rapidly increasing rate of maturity.   Before the week is out the huge fig tree, the young tree further down, and the contorted tree will all be overwhelmed with ripe fruit, pendent from like the stocking nests of the Haitian Cacique bird.    There is no end to them.  Every single one deserves to be picked and placed on a wicker tray.  Time is of the essence,for by now it is easy to see that in their turn the grapes are insistent on being cut, that the tomatoes have reached the peak of their red lacquer lavishness, and all that remain on the peach trees are the fluffy little pellets destined to become the hard ammunition for children to pelt each other..
After which the trees will bear no further crop but apples."


So far as I can tell, Cyrille Besset (1861-1902) had one really good picture in him.    How to make a memorable image of such a luscious landscape is harder than you might think.  The winding road leads away from the sea yet still satisfies the eye.   Route blanche  de Provence (1891)  which is now in the collection of the Musee d'Orsay was painted soon after Besset took up residence in Nice.   Besset was born in Saone-et-Loire and studied with Alfred Roll in Paris before moving to Nice in 1890.   He caught cold and died from respiratory complications in December 1902 while painting the landscape he loved.