Music Under the Radar: Josh Roseman 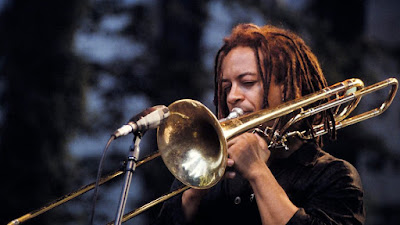 "There's a man dreaming
on a beach, there's another
who never remembers dates.
There's a man running away
from a tree, another missing
his boat or his hat.
There's a man who's a soldier,
another who acts like an airplane,
another who keeps forgetting
his time, his mystery
his fear of the word veil.
And there's yet another who,
stretched out like a ship, fell asleep."
- Windows (Janelas) by Joao  Cabral de MeloNeto

It may be a long way from Brazil to New Jersey, but not so far as you might think and the trail leads through an undeservedly overlooked song by Burt Bacharach, Long Day, Short Night.
The words "music by Burt Bacharach and lyrics by Hal David"  describe a  type of song that was  sui generis,  and surprisingly commercial given its complexity, in the 1960s, Ravel-ian melodies driven along by abrupt  meter changes (from 5/4 to 9/8 in Anyone Who had A Heart, for instance), harmonies  modulated in ways seldom found in American popular music, and insidious rhythms.  All  are present in Long Day, Short Night.

Bacharach wrote the song for the Shirelles in 1965, with every expectation that it would be a hit as his song Baby It's You had been for them in 1962.  Both songs make use of the baião, a style originating in the rural states of northeastern Brazil, less familiar than the urban bossa nova but older and just as mesmerizing Once you know that the baião is characterized by percussion-driven melodies dominated by a bass drum, the link between The Shirelles' Baby It's You and Josh Roseman's ingeniousness interpretation of Long Day, Short Night becomes obvious.

Trombonist Roseman has been a sideman with too many jazz musicians to name but his recordings as a group leader suggest a strong connection with some of them in particular: Art Ensemble of Chicago member and trumpeter Lester Bowie in his Brass Fantasy phase and Roseman's collaboration with Don Byron on the clarinetist's klezmer project.

Burt Bacharach studied composition with French composer Darius Milhaud whose Le Boeuf sur le Toit (1920) is a melange of popular  tunes lifted from  well known Brazilian musicians, and then put through a French press of Parisian urbanity.   For more on this subject - lots more! -  check out the website of Daniella Thompson, a jazz programmer at KPFA, 94.1 in Berkeley, whose Boeuf Chronicles is just one of her many explorations of Brazilian music.

The composer found his mother lode in the early 1960s, working with African-American vocalists Jerry Butler (Make It Easy on Yourself), Chuck Jackson (Any Day Now) Tommy Hunt (I Just Don't Know What to do with Myself). And we can't forget the fabulousmess of Shirley Allston and the Shirelles. The  vocal group from Passaic, New Jersey  won a high school talent contest in 1957, attracting the attention of Florence Greenberg, a record producer who eventually brought them to Scepter Records where they had the good luck to work with Burt Bacharach, before his collaboration with Dionne Warwick captured the pop public's attention and a large share of Bacharach's songs.

Baby It's You
The Shirelles


To read more : Education By Stone: selected poems by Joao Cabral de Melo Neto, translated from the Portuguese by Richard Zenith, New York, Archipelago Books: 2005.  One of the finest poets writing in Portuguese in the 20th century, Melo Neto (1920-1999) was a native of Permanbuco, one of the Brazilian states that make up the 'nose', the country's most eastern outpost on the Atlantic Ocean, a hard, dry land.