The Late Flowers Of Leon Dabo 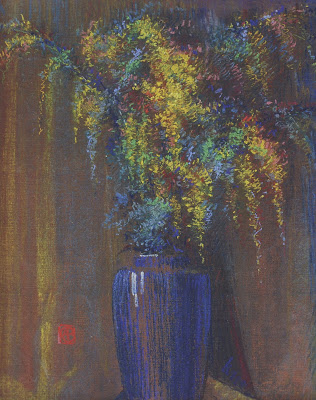 
That's not an exact quote from the 28th verse of the Rubaiyat of Omar Khayam but, after reading Maurice Maeterlinck's The Intelligence of Flowers, it strikes me as the right epigraph for Leon Dabo's flowers.

Exactly what prompted Leon Dabo (1864-1960) to embrace flower painting around 1915 is unclear. He was already a successful artist (Theodore Roosevelt reportedly admired a Dabo landscape shown at the New York Armory Show in 1913), yet Dabo chose not to make a public display of this interest until 1933,  with  an exhibition at the Knoedler Gallery in New York.  In the time-honored manner of a town crier, the gallery’s press release announced breathlessly: “…his studies of flowers have been hidden away….These flowers were not exhibited and never shown in his studio, with the result that not even his intimate friends had the faintest inkling that the painting of flowers constituted a secret and jealously guarded passion.”   Purple prose may have seemed appropriate to introduce these surprisingly vivid works by a painter of subtle landscapes but there is no particular evidence to support any of these claims.  And there was no need to hype these pictures; full of life and interest as they are. 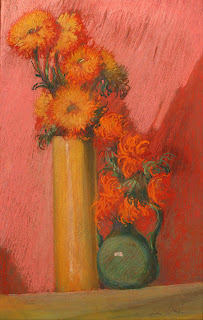 Dabo, who was born in France and traveled there as a young man after his family moved to Detroit,  knew  the pastels of  Manet, Mary Cassatt,  and Odilon Redon,   Redon’s early watercolor landscapes from the 1870s prefigure the delicate colors  of tonalism.  In the late 1890s, the French symbolists would turn to pastel, reinvigorating a medium, that had been popular during the 18th century but had lately been  relegated to  school children and amateurs.
In Dabo's use of chalks and conte crayons, there may be the hint of a motive for his flower pictures.  Unlike in his large oil landscapes, Dabo used pastel  to  draw, sharpening his points to create contrapuntal effects against the characteristic shimmer and shadow.  La vie en rose, as the title implies, is a tonalist picture but what a riot of vivid colors and sharply defined spaces it contains.  In it, you can see a recurring feature of Dabo's flower pictures:  a background alive with movement, as though to remind us of the  water and wind that birthed  the blossoms. So Dabo uses shimmer to suggest a mis-en-scene for his flowers.  Cascade of Floral Fireworks (at top) positively glitters with movement, a virtuoso presentation piece for an underrated medium.   His use of asymmetrical arrangements suggests that Dabo .had looked at Japanese prints.   Arc-en-ciel and  La vie en rose look like he also knew ikebana (living flowers), the Japanese discipline of floral arrangement. 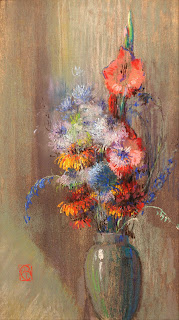 While Dabo was late to show his flower paintings to the public, Edouard Manet's flowers were late by necessity.  Manet created a group of sixteen flower paintings during the final years of his life.  Confined to home in the winter of 1880 by the ravages of syphilis, Manet concentrated his waning energies on the parade of floral bouquets brought to him by his friends.  (That the pre-eminent painter of the modern city was felled by a disease spread through the freedom that he had portrayed in his great works, was  ironic.)  In his flower paintings Manet used everything he knew about painting light to paint as much life as any small canvases have ever contained.  Two artists, for different reasons,  achieved the same results, works smaller in size but by no means diminished in art. 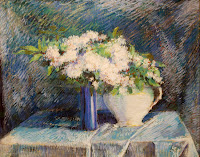 Like Manet, Dabo  produced flower pictures in both pastels and oils. Dabo’s brushstrokes often recall the short, thick marks of Manet’s  lilacs.  Notice the similarities between Manet's Bouquet of Lilacs (Prussian State Art Museum, Berlin) and this early Dabo work titled Flowers in a Blue and White Vase.   Where they differ is in the backdrops; what is uninflected in Manet's pictures is invested with drama by Dabo.  He makes backgrounds that seem to speak, to be in conversation with the flowers through the medium of light.  The publication of The Pastels of Leon Dabo, admirably designed and executed, is long overdue.

ADDENDUM:  In this, the one hundredth anniversary year of the Armory Show, held in New York City, I should have mentioned that works by Leon Dabo were included in that important exhibition, including a  landscape of Canada in winter and Evening North Star. 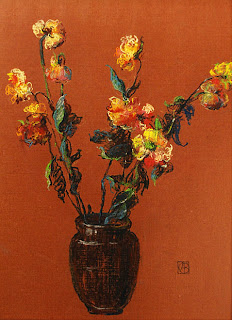 The Pastels of Leon Dabo  by William Gerdts et al, is published by Sullivan Goss: An American Gallery, Santa Barbara: 2012 in connection with their exhibition Leon Dabo: Toutes Les Fleurs.

These are great, thank you for pointing. I showed Manet's "Last Flowers' some time ago in my blog: http://gerrie-thefriendlyghost.blogspot.nl/2011/01/eduard-manet-last-flowers.html. After that I discovered the flowers of contemporary American Stanley Bielen. You should have a look.

Gerrie, thanks for the pointer. "The Last Flowers of Manet" was one of my mother's favorite books. As she grew up in Essex County, New Jersey and visited the Montclair Art Museum, she may have seen their Leon Dabo landscapes. I like to think so.

I appreciate your review of the "forces behind the force" with respect to Dabo and the influence of Manet and Redon. Dabo would have been almost 70 when he showed the bulk of his florals at Knoedler. It was the middle of the depression and not hard to imaging why Dabo would have presented florals vs. his trademark dark landscape. Why would a celebrated landscapist, switch so cavalierly to the charms of still life paintings. Why would he forsake nearly 45 years of "branding" when he exhibited the new floral work?

If Dabo exhibited his flowers from financial necessity, that's understandable. He may not have intended to exhibit them when he made them. He may have privileged oil painting over pastel as a medium, given his successes with oil.
Redon was criticized - and sometimes is, still - for (re)turning to color after his impressive run of black and white works. What the artist wants to do and what the public wants from the artist, even for a successful artist, are not always the same.
For me, Dabo's pastel flowers are more impressive than his oil paintings of flowers. It looks like the challenge of a different medium excited him. I'm glad we get to see them, now, so thank you.

It is interesting how our environment shapes our "eye." Dabo, as you say, may have been influenced by Manet. You clearly remember your mother's copy of "The Last Flowers of Manet." Not only did it shape your mother's eye, but all these years later, it becomes apparent that it also helped shape your eye. There is a Max Weber still life (1942) coming up for sale at the LA Modern Auction which establishes the connection from Manet, to Dabo, to Weber. The continuum of the deep fabric of the art world is apparent in all of these and "The Blue Lantern."

We make connections with art from our experiences, naturally enough. Critics like to call it reception theory, which I think is overdoing the obfuscation. There's something to be said for Aby Warburg's affinity atlas. At times, there's something that many artists are attuned to without an obvious explanation or collaboration. Did Redon influence Dabo's flowers? Was it just a contemporary mood? Or is the connection one that we make?