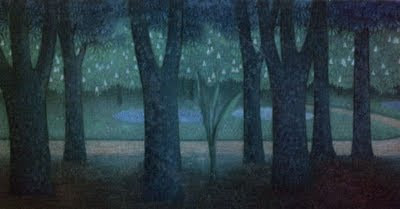 “In the arts feeling is meaning.” –  Henry James, quoted by Leon Edel.

“To make a painting, all you need to do is take some paints, draw some lines, and fill the rest up with feelings.” – William Degouve de Nunques 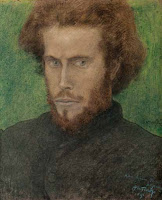 His words strike the  symbolist attitude of disdain for the narrow-mindedness of the bourgeoisie. His portrait, executed by his friend Jan Toorop,  reveals a guarded, introspective young man.  At twenty-three, William Degouve de Nucnques  was about to have his first exhibition in Paris, thanks to the recommendation of  the great Auguste Rodin.  But he had also recently experienced a contentious election for admission to the Belgian avant-garde Les XX and he was an impressionable young man.
The aristocratic origins of the Degouve de Nuncques family have been called into question by new research but Degouve believed in them and so did his contemporaries. The poet Alfred de Vigny  attributed the family's elevated tastes in literature, music, and philosophy to noble lineage.    More concretely, Henry de Groux  described the artist's father as a character from a novel by Balzac.  "(H)e detests anything that represents authority, loves animals even  more than mankind, and walks about with a loaded shotgun to shoot at neighbors bent on harming his cats."   What was indisputable was the family wealth.
When Degouve was born in 1865, the family was living at Montherme in eastern France. To escape the Franco-Prussian War,  they moved to Spa and then, when William was seven, to Brussels.   Schooled at home by tutors, Degouve taught himself to draw, eventually enrolling at the Royal Academy in Art in Brussels. 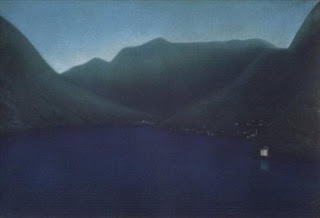 His marriage to fellow artists Juliette Massin in 1894 brought Degouve into the circle of young Belgian artists.   Juliette's sister Marthe, also an artist, had married Emile Verhaeren in 1891.  Their happy union inspired Verhaeren's  Les  Heures claires (The Sunlit Hours - 1896)  Other Verhaeran books such as Les campagnes hallucinees (1893) and Les villes tenticulaires (1895) suggest a symbolist lingua franca in the making.   With this in mind, Degouve's images of tree roots and oddly  illuminated landscapes become more comprehensible.  But even among friends, the artist was known as a melancholy person.

Not on their honeymoon, however, which stretched into a tour of the continent.  Some of Degouve's loveliest nocturnes  (Twilight On Lake Como, Park in Milan, and Night In Venice) date from the couple's first trip to Italy in 1895.  Their travels took them to Lake Como, Milan, and Bologna culminating at Venice.  When the trio of pcitures was shown at the salon of Les XX  in Brussels in 1897, they were enthusiastically received. 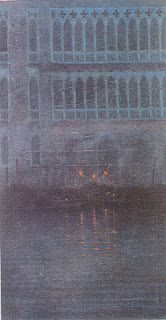 Degouve's new night pieces are lit by magic,  a benign form of mystery. The  miniature lanterns hanging from the trees of Park In Milan are actually chestnut blossoms shimmering in the  moonlight, moving to an invisible evening breeze.   The crepuscular light behind the mountains is mimicked by the lights along the shore of the lake, as delicate as fireflies in Twilight At Lake Como .  Blue, the color of dreams for the Symbolists, is the prevalent color here but  regardless of color, dreams  belong to the realms of night, not the certitudes of daylight.

In reproductions it can be difficult to tell apart Degouve's pastels from his paintings.  Early on, he had experimented with thinning his oil paints to incorporate the weave of the canvas as pictorial element.   Back in Brussels, the symbolist circle was impressed by the 'nocturnes'  of James McNeill Whistler. Degouve's Night In Venice, the most obviously similar was originally owned by the violinist Eugene Ysaye, a member of his Brussels circle.

Note:  The recent exhibition William Degouve de Nuncques: maitre du mystere was a joint undertaking by the Kroller-Muller Museum in the Netherlands and the Musee Felicien Rops in Belgium.  It it the first Degove retrospective since 1936 and contains more than one hundred works by the artist.  Three nations can lay claim to Degouve: France where he was born, Belgium, where he lived, and the Netherlands where the largest collection of his work has been preserved.  It is fitting that the excellent catalog accompanying the exhibition is available in both french and Dutch versions.
Posted by Jane Librizzi at 10:44 AM