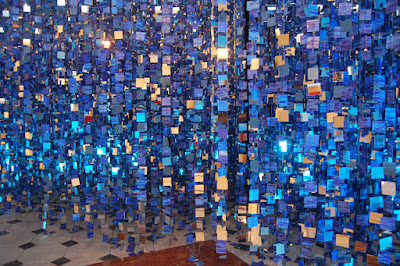 Waves of blue shimmering and fracturing every known color into shards of now-you-see-them-now-you-don't; this is Marea Alta or High Tide, the creation of Cuban artist Mabel Poblet.   Composed of thousands of mirror fragments  imprinted with seascapes, Marea Alta literally opened the 12th Havana Biennale; visitors had to pass through the curtain to enter the exhibition, giving them the opportunity to both look at and reflect on their own images as remnants of their country's recent past.  As an island, Cuba has  a long and permeable coastline; like Italy and India its culture has benefited by infusions from abroad.
As we have learned since the breakup of the Soviet Union, international Communism was never quite the monolith of our bad dreams.  Cuba, for example, exerted  less heavy-handed control over the arts that the Soviets did. Soviet-style socialist realism was no match for the rich mixture of north and south, Europe and Africa that  makes up Cuban art.  How the Cuban government supported the arts,  building an art school in the 1960s and even subsidizing artists themselves provided impetus to an already vibrant culture.  However, with the collapse of the Soviet Union, in the 1990s, Cubans endured what they remember as the "Special Period,"  of disastrous financial conditions as  foreign aid collapsed.  Among other hardships, art supplies became almost impossible to obtain, and artists turned to whatever materials were available to continue making things. 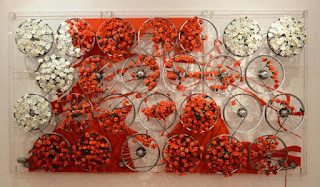 Simplemente bellas is an exemplary series inspired by Mabel Poblet's visit to a workshop at a women's prison where inmates  were making plastic flowers from odd bits of plastic. By themselves, the flowers  were unremarkable but Poblet was moved by the satisfaction the women took in designing and creating them.   Poblet's original plan was to make a portrait of a young girl overcome by circumstances she cannot control but the finished work also displays an invincible optimism that beauty can be created from ordinary materials.
Poblet arranged the flowers, using bicycle wheels for their containers  and fixed them to an acrylic board.  When an engine  (in back) is turned on, the wheels gyrate, causing the 'realistic' flowers to blur into abstraction,  alternating current indeed.  She has said that she hopes viewers will be moved to think about the relationship between kitsch, folklore, and studio art, and also about the woman who made the flowers.    "I thought those flowers deserved a context outside of prison to be shown the way Betsy and her friends would have wanted it."


Like so many of her contemporaries, Poblet uses photography, video and installations in various combinations.  Her interest in aspects of  pop and kinetic art is obvious in her images of herself  such as in  Desolata and  Narciso  or Narcissus (below).  Red is Poblet's symbolic color of choice; it stands for the polarities of life and death.  Although she creates art with what are, for her, didactic purposes, Poblet does it with beauty in the outcome and joy in the process. 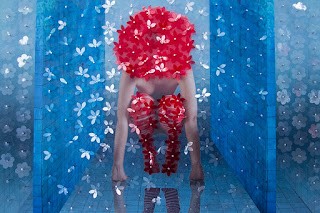 Born in Cienfuegos, Cuba, in 1986, Mabel Poblet (Pujol) graduated from the Instituto Superior de Artes (ISA) in 2012, In just a few years she has been recognized as a major figure in  contemporary Cuban art.  Her work is included in museum collections in France and Cuba and has been exhibited in North America and Europe. 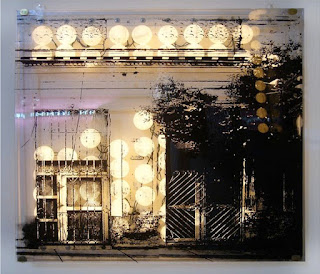 Thanks for illustrations of this young artist !

Tania, you are most welcome. When Poblet writes about her work she uses many of the current fashionable buzz words. Then you look at her work and it is livelier than you might expect.