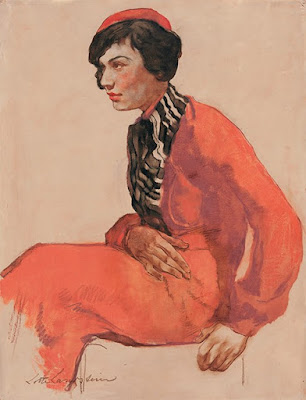 "They did not look.
They envisioned.
They did not photograph.
They had visions.
Instead of the rocket they created the perpetual state of excitement."
- Kasimir Edschmid (1890-1966), translated from the German by Walter H. Sokel

During the interwar years everything  novel seemed unprecedented, nowhere more so than  in the new Weimar Republic.  More progress was being visited upon people than ever before.   Berlin, which had a population of 800,00 in 1870, had grown to more than four million by 1920.  Everything was accelerating, from the speed of travel and  news to the pace of everyday life.  Gaiety was in the air  but also an unstable nervous energy.

From her birthplace in eastern Prussia, Lotte Laserstein (1898-1993), daughter of a watch maker and a piano teacher, came to Berlin, where she was one of the first female students accepted by the Berlin Academy of Fine Arts.  While there she won the Academy's Gold Medal which entitled her to her own studio.  She discovered an affinity with the paintings of the 17th century Ditch artist Franz Hals.  Did she ever know that of many of them attributed to Hals had been painted by a woman, Judith Leyster?  Laserstein herself would accomplish something new - portraying the modern woman in he nascent state.

Woman in a Red Beret is a realistic portrait that wears its modernism lightly.  The paint is applied openly to the canvas, without undue artifice.  There are two distinct and visible stylistic levels in the picture; the upper portion is finely detailed  while the lower remains sketchy.  The subject, in red dress, hat, and lipstick is self-contained, with no need of a backdrop.

In the early 1930s Lasertein participated in the Berlin Women Artists Association.  To support herself she took various odd jobs, including the illustration of an anatomy textbook. But in 1933 Lasersterin was classified  as "three quarters Jewish" under the new Nazi racial laws, making her continued career untenable. Whether on not she knew that  her masterpiece Evening Over Potsdam had been labeled "degenerate,"  Laserstein was forced to close her studio in 1935.

Laserstein sensed that she needed to leave Germany even as three of her paintings enjoyed success at the 1937 Paris World's Fair. An invitation to exhibit at Galleri Modern in Stockholm that year became her exit plan.With help from the Jewish community in Stockholm Laserstein became a Swedish citizen in 1938. But she was unable to bring her mother to safety; Meta Laserstein was deported to Ravensbruck concentration camp where she died at age seventy-five in 1943.   Lotte Laserstein lived in Sweden for the rest of her life and died  there in 1993.  But it is the work she created during those frenetic interwar years that are her legacy

Fittingly, the first painting purchased by the National Museum of Women in the Arts in 1988 was  Lotte Laserstein's  Traute  (Trust), painted in 1930.

Good on you for finding Lotte's story. I don't know if she painted any male portraits, but her female portraits are beautifully observed. My favourite Woman in a Cafe (1939) where the light on her face is sublime.

Hels, always good to get your comments,
Piecing together bits of information from here and there and cross-checking it is a bit like detective work, but fun. Although some group portraits include men, one source I found wrote that Laserstein preferred female models.
That does seem to be the case for sheer numbers.

I like this portrait and I discover this artist. Thank you, Jane.

Tania, maybe you will get to see Her work in person since most of it is in western Europe.