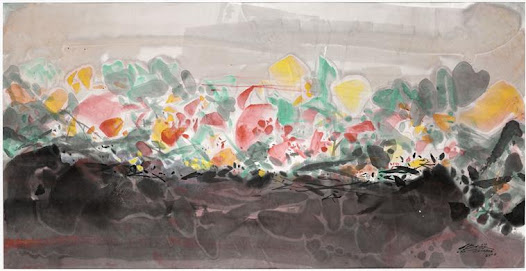 Very little is known about this painting other than its title  Le printemps de la riviere du sud (Spring on a Southern River), said title likely given by the Musee Guimet where the painting lives. The artist's name and era are unknown but painting of colored inks on paper is  "antique" and China is the country where it was made.  Just because we don't know much doesn't mean we can't enjoy its  vision of flowers bursting from the cloudy winter waters.  I like to think of the flowers bursting up and out of the earth,\.
Musee Guimet was founded in 1879 by wealthy industrialist  Emile-Etienne Guimet to display his extensive collection of art  from southeastern Asia. He had assembled the collection at the behest of France's minister for  public education. On his travels Guimet visited Greece, Rome, and Egypt as well, so the breadth of the museum's treasures makes it a must-visit museum on a trip to Paris.
Image: Le printemps de la riviere du sud, Musee Guimet, Paris.
Posted by Jane Librizzi at 2:15 PM 2 comments: 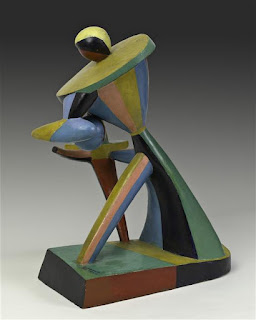 'Years later, some will say none of this happened; the shops were pen, we went to see puppets in the park.

And yet on some nights townspeople dim the lights and teach their children to sign. Our country is the stage: when patrols march, we sit on our hands. Don't be afraid, a child signs to a tree, a door.

When patrols march, the avenues empty. Air empties but for the screech of strings and the tap tap of wooden fists against the walls." - "And Yet, on Some Nights" by Ilya Kaminsky, from Deaf Republic, Minneapolis, Graywolf Press: 2019

Alexander Archipenko (1887-1964) was born in Kyiv when it was part of the Russian Empire. After stuying at art schools there he moved to Moscow where he was able to exhibit some works in group shows. In 1908 he moved to Paris where he lived in La Ruche,  a Russian art colony. While in Paris his sculptures earned him th nickname "the father of Cubist sculpture.

Archipenko emigrated to the United States in 1923, becoming a citizen six years later. He broke with the neoclassicism of Rodin and Maillol; he reimagined the human figure in three dimensional space through contorted planes set in negative space.

Ilya Kaminsky was born in Odessa in 1977 when Ukraine was one of the union of Soviet Socialist Republics. Kaminsky is hard of hearing as a result of a case of mumps he suffered as a small child.  The Kaminsky family was granted political asylum in the United States in 1993 because of Ukrainian anti-semitism.  Ilya Kaminsky settled in Rochester, New Yotk.  He has published two collections of poetry Dancing in Odessa (2004) and Deaf Republic.(2019). Three Per Cent, published monthly by the University of Rochester Press has been inspired by Kaminsky's championing of literary translation. 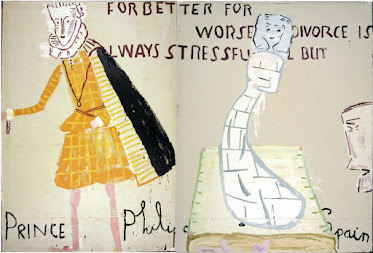 "Wife and servant are the same,
But only differ in the name:"
- Lady Mary Chudleigh (1656-1710), from "To The Ladies"
"for better for worse divorce is always stressful but..."
Rose Wiley's paintings have an exuberance that, once seen, is unforgettable. Her sources cut a broad swath through visual media - and from every period in art history - greeting cards, comics, magazines and newspapers, film stills.  She combines figures and texts from these and other sources, creating new stories .she calls "personal visual diary-making."
The genesis of Lords And Ladies was ab article about a divorce that appeared in The Guardian newspaper. A bride stand on a wedding cake while her husband flees the scene. He is modeled on Philip IV of Spain as he appeared in a portrait made nu 1620 by Rodrigo de Villandrando. (in the collection of the Prado in Madrid). The lettering for the bride's words forms a lattice pattern whiles Philip's title looks like a signature
Wylie usually paints by placing an upstretched canvas on her studio floor. This enables her to make gestural brushwork that makes for an improvisational feel to her work.
Rose Wiley was born in Kent, England in 1934.  She graduated from the Royal Academy of Art in 1981, although she had studied at the Folkston School of Art in the 1950s. Like many women of her generation, Wiley was sidetracked from her career when she married a fellow artist and raised three children.
Image: Rose Wiley - Lords And Ladies,  2008, oil on canvas, National Museum of Woman in the Arts, Washington, DC.
Posted by Jane Librizzi at 10:50 AM No comments: