Paul Gauguin: On the Road to a New Synthesis 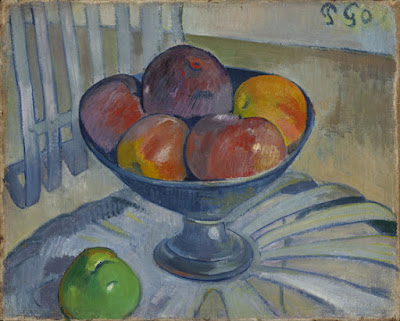 What first catches the eye here is the bowl of fruit but what makes this picture so compelling and even mysterious are the repeating blue metal panels with their emphatic patternization. Brilliant strokes of blue outlined in darker blue do most of the work that usually falls to shading; some critics compared the effect to cloisonne. It gradually dawns on the viewer that the blue grids are  a metal garden chair.  To be sure, the apples in the bowl also show Gauguin moving toward a new stylistic synthesis, particularly the lone green apple outlines in a darker shade of green.

It had become very important to Gauguin that his paintings have strong and identifiable compositional elements that contained within them an  emotional  response. His quest was to synthesize these seemingly opposing aims. It would be a decorative art and a frank acknowledgement of the two dimensional reality of canvas.

Around 1890 was when Gauguin  probably painted Bowl of Fruit on a Garden Chair while at at Le Pouldu in Cap Finistere, Brittany. While at Le Pouldu, he lost a small stipend from the family of his Dutch friend Meter de Haan. The small canvas is mounted on board, an inexpensive way of working necessitated  by Gauguin's minimal finances. He roomed at La maison de Marie Henry; when he left it was with a trail of unpaid bills. Mme Henry sold the paintings that were also left behind to recoup her losses

The year before Gauguin had joined his friend Emile Bernard ar Pont-Aven and there Gauguin coined the term synthetism, shorthand for his rejection of Impressionism.  He had come there from Arles where he told van Gogh that his appetite to do new things was insatiable.

Gauguin exhibited with the Impressionists in 1886 but, even if they had continued the annual ritual, he was looking for a different approach.  He found Impressionism confining, superficial, and lacking aesthetic rigor; its emphasis on the effects of light (effet de lumiere) in the natural world seemed reductive and  stifling to his creative impulse. At this time Gauguin was unable to sell his work easily, paradoxically freeing him to experiment.


Bowl of Fruit on a Garden Chair was donated to the Los Angeles County Museum of Art in 11954 by the actress Merle Oberon.

Why was Gauguin unable to sell his paintings? I am assuming because the patrons were still in love with the Impressionists. But in any case, what did Gauguin think he was going to live off?

Hels, Gauguin had been working as a stock broker: after the market crashed in 1882m people stopped buying things - including paintings. In 1887 Gauguin travele to Panama where he worked on construction of the Panama Canal; he was fired from that job. Between bad luck and a difficult personality, Gauguin had trouble establishing himself. And then he left for Tahiti!