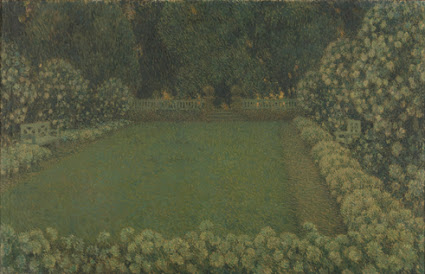 Henri Le Sidaner (1862-1939) was born just as the Impressionists were preparing to overturn realism in painting and he died just as abstraction was peeking its nose under the art tent like some mischievous camel.  To our eyes he may look like a particularly sweet Impressionist but Le Sidaner was, rather, an adherent of Symbolism, another reaction to realistic art.  The potted version is that Symbolists expressed truths through metaphorical images (works as well in literature as in art). His friend Gabriel Moury described Le Sidaner as "a mystic who has no faith."

His contemporaries compared Le Sidaner to the great novelists and playwrights of the movement: "The Rodenbach of Painting" and "The Maeterlinck of Painting."  Both men were Belgians. Georges Rodenbach was the author of Bruges-la-Morte (1892), said to be the first novel illustrated by photographs and Maurice Maeterlinck was a Flemish poet who wrote in French and was awarded the Nobel Literature Prize in 1911. His paintings get a mention in Marcel Proust's In Search of Lost Time

Le Sidaner, the child of Breton parents, was born on the island of Mauritius. He was a contemporary of the Post-Impressionists and studied art in Paris with an academic artist but for his own painting, he looked to the Symbolist movement in turn of the century Belgium. He moved to the village of Gerboroy in 1898 where he could paint in solitude and cultivate his gardens but that did not mean that he set his easel outdoors.  Le Sidaner preferred to paint from memory which pulled a scrim between the painting and the viewer.

Like Whistler, Le Sidaner saw potential in liminal times of the day, those moments when the sensory threshold is about to be crossed. The white garden, that Le Sidaner designed, was surrounded by sandy walkways,  rows of white pinks (Dianthus plumairius) formed its border, the trees were white weeping roses and a white bench  provided a resting place for contemplation. Its design harked back to a medieval hortus conclusis, an enclosed garden with roots in the Song of Solomon: "A garden enclosed is my sister, my spouse, a garden enclosed, a fountain sealed up." The eye is invited to enter the painting through an expanse of empty lawn, follows back to the balustrades and the steps to arrive at the barely visible red dot of the setting sun. With or without the symbolic elements,  Le Sidaner's paintings  reach out to the viewer.

Posted by Jane Librizzi at 2:31 PM

Le Sidaner was fortunate to study art in Paris with an academic artist. Even though he was a contemporary of the Post-Impressionists, every young artist who struggled without good teachers and mentors would probably disappear from art history. But painting in solitude in a small village in 1898, in his mid 30s, would have been very lonely.

Did Le Sidaner not participate in collective exhibitions?

Hels, here is some more information about Le Sidaner.
In 1883 he returned to the Côte d'Opale where he joined fellow artist Eugène Chigot at Étaples to established an artists’ workshop and regular exhibitions that would eventually develop into a school of art, called the Villa des Roses.[8] Étaples had a tradition of en plain air painting established by Charles-François Daubigny (1817–1878), who retreated there from the outbreak of the Paris Commune in 1871 and of the local Deauville painter Eugène Boudin (1824–1898), a leading post impressionist. In the late nineteenth- century numerous artists were drawn by the sand dunes, the atmospheric light and the remnants of an older France. In particular artists from the United States, Australia and the British Isles settled around Étaples in a loose collective. Most left at the outset of Great War in 1914 as Flanders became part of the Western Front.[9] Le Sidaner stayed at Étaples for twelve years preferring to work in isolation