How The Old Masters Came To America

"One takes, moreover, an acute satisfaction in seeing America stretch out her long arm and rake in, across the green cloth of the wide Atlantic, the highest prizes of the game of civilization."  -  Henry James, from "The American Purchase of Meisssonier's 'Friedland,"

When Henry James wrote this in 1876 he was a young man.  By the time he came to write the short novel The Outcry in 1911 he was in is sixties and had been living in England for decades.  In The Outcry James took the opposite position.  Times had changed for the British aristocracy. In the wake of the collapse in grain prices they had been rendered land poor, reduced to selling their old master paintings to culture climbing American millionaires like J.P. Morgan and Henry Clay Frick.

Mechanized steamships  had caused the collapse of grain prices as  trans-Atlantic trade enabled the United States to export its grain to Europe.  Over a period of just nine years the price of wheat dropped  from twenty cents a ton down to two cents. The British and Russian land barons were hit especially hard by this; the famines on the Russian steppes would not be forgotten by the peasants; their descendants flocked to support the Russian revolutions of 1905 and 1917.

A similar upheaval but a much worse one took place in Norway, an entirely different society from its European neighbors.  Norway in the 19th century was a poor country in an undeveloped state, its people subsisted  mostly off nature as farmers and fishermen with a small class of carpenters and cobblers.

However hygiene was improving by mid-century so people were living longer but the soil could not support the larger population and agriculture collapsed, forcing people to migrate to the cities. Industrialization came late to Norway and when it did it was sudden and brutal. Kristiana, as Oslo was then known, grew from 17,000 in 1800 to 230,000 in 1901.

From tiny farm communities where everyone knew everyone going back generations and the pace of life was slow, Norwegians were thrust onto an urban treadmill where undreamt-of speed became the pace of their days, where they might see hundreds of strangers in a single day.  The wonder was that even neighbors could be strangers in the city. The need to constantly defend oneself from over-stimulation led to the use of coffee, cigarettes, and alcohol ... 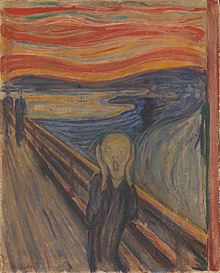 Knut Hamsun (1859-1952) published his novel Hunger in 1890. The story of a starving young man in the capitol city, who moves in and out of homelessness, hunger eventually leading to delusions.  All the while trying to maintain a façade of respectability, he gradually suffers mental and physical deterioration.  Hamsun took a dim view of the modem metropolis just then coming into being, describing Kristiana sardonically as "this wondrous city that no one leaves before it has made its mark on him."

Edvard Munch (1863-1944), painter of emotional extremes lived through these disorienting times. Located on the outer edge of Europe,  a third of Norway was above the Artic Circle. How desolate was this place?  The novelist Mary Shelley had sent her Frankenstein off to die in its Arctic wastes.  From notes he left behind we know that this jittery atmosphere inspired The Scream (the best-known pastel version was created in 1893).

A brief historical note on the term "old masters."  The term first came into use after the French Revolution to distinguish pre-revolutionary artists from then contemporary artists who were held to be 'modem masters.'

Posted by Jane Librizzi at 3:54 PM

All those paintings that went across the ocean !

Tania, and those paintings were expensive. The robber barons of the day had money to burn and there were dealers who were eager to bid up the prices of those they represented.

Good day, Jane! I've just recently come across your blog, and I really like it here. You're sharing wonderful paintings and interesting information to read.
Regards✿

Welcome, Zara, and thanks for the kind words. There are 374 posts and counting!

Thank you! Wow, i'll definitely be coming over to explore more of what you have hereツ👍