Looking At Pictures With Jozef Czapski 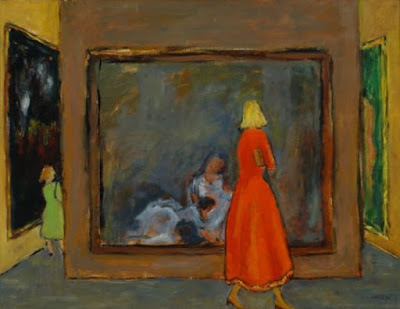 "The good gray guardians of art
Patrol the halls on spongy shoes,
Impartially protective, though
Perhaps suspicious of Toulouse.

Here dozes once against the wall,
Disposed upon a funeral chair.
A Degas dancer pirouettes
Upon the parting of his hair.

See how she spins! The grace is there,
But strain as well is plain to see.
Degas loved the two together:
Beauty joined to energy.

Edgar Degas purchased once
A fine El Greco which he kept...
Against the wall beside his bed
To hang his pants on while her slept."
- "Museum Piece" by Richard Howard

"But the true new painting will begin only when it is understood that color has a life of its own, that infinite combinations of color have their poetry and poetic language much more expressive than ancient methods." - Sonia  Delaunay

A seminal breakthrough made by the Expressionists was the realization that color liberated from the demands of realism could amplify emotion.  Vincent van Gogh had often affirmed to his brother Theo and others that he used color to express his emotions.  Then consider Jozef Czapski, a painter attuned to the moods and body language of others, who used color to heighten the viewer's awareness of people in their daily lives.

Against a background of muted tones typical of those used by Gustave Courbet (this painting Exhibition commemorates a centennial retrospective of the 19th century Realist at the Grand Palais in Paris in 1977) our eye is drawn to the figure of a tall woman dressed in orange, a clutch under her arm. As she strolls, her feet move ahead while her head turns to look at the painting, inviting us to wonder which will prevail - the feet or the eyes.    Czapski, a devout Catholic, may have chosen the image of two women, one sitting while the other kneels to wash her feet,.for its religious significance.

To paint paint itself is to create an illusion, one that viewers respond to with pleasure.  When we take in the yellow walls and shades of green in the next gallery they provide a frame of sorts, another image within an image and another mystery.  Is the woman in the green dress staring at something we cannot see or is she gazing across the gallery to the giant nude on the opposite wall?

Jozef Czapski frequented the museums of Paris,  for the interactions between  people and  paintings,as eagerly as for the paintings themselves. Another example is Young Man Before a de Stael, also the product a retrospective at the Grand Palais in 1981     How a person related to a picture, what choices they made among them, how closely they approached, whether they looked in passing or engaged in an extended colloquy.

In his biography of Czapski, painter Eric Karpeles describes his way of looking at a picture; first look from a middle distance, then move closer, then back to the middle distance, and finally from across the room.  There is more to looking at pictures than just standing still.


For much more about Jozef Czapski: Almost Nothing: The 20th-Century Art and Life of Jozef  Czapski by Eric Karpeles, New York,New York Review Books: 2018.