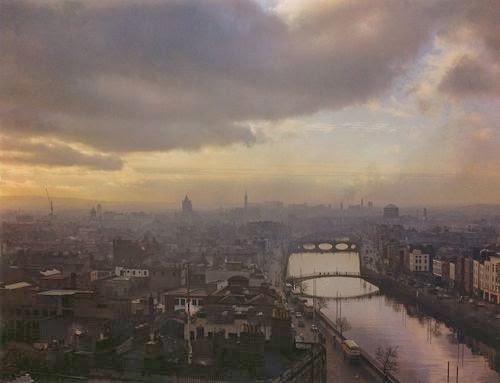 Past town, the Liffey breaks from iron into grass,

Then wanders, with the swans preening
In the shaken warmth of early March
And white abandoned seabirds leaning
On the wind.  A cat steps cautiously
Among the daffodils.  Under a tree
An old man contemplates his shoe,
Or turns to what he never thought to see
Again, the water fretted by a cygnet's thrust.
Look well.  Further beyond that river bend
Are spaces teemed with cities which must
Strike a destiny.  But here for aimless miles
The river flattens to the land.
-          The Liffey Beyond  Islandbridge from 23 Poems by Eavan Boland, Dublin, Gallagher Press: 1962.
A photograph of the poet Eavan Boland, age 21, was included in the book Dublin: A Portrait by V.S. Pritchett & Evelyn Hofer (New York, Harper & Row: 1967, London: 1966)

When Evelyn Hofer and V.S. Pritchett agreed to collaborate on a book about Dublin in 1965, it was the third project in as many years that the German-born photographer and the British writer had worked on.  The first was London Perceived, published in 1962  but it turned out that Dublin: A Portrait was the charmed work.  Not that the two of them brought identical approaches to bear.
In January of 1966, when she had completed most of the photographs, Hofer wrote to Pritchett:   “You and so many others say that Dublin is one of the most beautiful cities in Europe – this, from the very beginning, I never felt….However – I found the people much more fascinating – and have taken a great deal of portraits and have perhaps come closer to them than in any of the other books.”
Pritchett's reply: “I am very eager to see your pictures as I am sure they will be the making of the book and give it the sense of Irish people which I find so difficult in writing.  I feel they are all whispering around me.”  What they had become  was perfect complements for each other.
“.(H)ow much is hidden by the neglect of appearance..” Pritchett would write in Dublin, intuiting the loss and hatred that lay under the surface of everyday life - John Masefield's "worlds of pain."  How the statue of William of Orange outside Trinity College became the occasion for Protestants and Catholics to rehearse the grievances of 1690, when the Protestant king had subdued the locals in the Battle of the Boyne.  The students took turns festooning William's memorial with lilies on the oe side and defacing it on the other. It was dynamited in 1836 but the pieces were gathered up and, unlike Humpty Dumpty, put back together again.  It was finally blown up for good in 1929; the pieces were smelted down, but not before someone had made off with the head.  Further than that, Pritchett was convinced that the entire James family, including Henry, William, and Alice, inherited their spiritual horror – or sense of vastation – from their Irish ancestors.  In support, he points to the Gothic horror  stories of Joseph Le Fanu.

Consider the children gathered for their picture front of the monument, dressed for play, on a cold day, The little red-haired girl standing at right in a green coat is holding on to her collie dog, all stand quietly at least for the moment that the photographer had waited for.  On this winter day the Coombe looks such a quiet place but like every street in this old city, it has its history.   This had been the place where the French Huguenots caused Flemish weavers sought refuge from..... They were not welcomed.   Brutal riots ensued, the Irish butchers cut the leg tendons of the immigrant weavers, who retaliated by hanging butchers by the jaws of their own meat hooks.  There is a Gothic element running through Irish history, recounted with evident relish by Pritchett in the following anecdote: Sir John Mahaffy of Trinity College,  on being told that one of his enemies was ill,  remarked, “Nothing trivial,  I hope.”


Segregation of the sexes was finally showing cracks in the 1960s when Pritchett gave the locals'  reaction to Hofer as a photographer: “To a professional photographer, a woman, it is suggested  with immense circumlocution and tact that it would 'look better' if she explained she did not earn her living in this way, but took photographs for pin money.”

But Hofer was no ordinary documentary photographer, having no need to make the quick candid shots that became, of necessity, the prevailing mode during the previous decades of war.  Hofer would wait patiently for the moments when  some“inside value, some interior respect” became visible in her human subjects.  In her group photographs each individual gets her/his due.  The three gravediggers have cocked their hats to their individual preference; Anna and Emma, the two chambermaids, one older and in sensible shoes, one younger with lace frills at collar and cuffs.  Even the architecture in Hofer's photographs appears stripped of the  superfluous.  Essence is all. And there were those who noticed the difference.  Hofer contributed several memorable images to Mary McCarthy's travel book The Stones of Florence (1959). She was also among the first fine art photographers in the early 1960s to use color film.  The Dublin book was the first project where she included both media in one project.

During her long career, Hofer's work attracted only modest notice from critics and curators and was never the subject of a museum show in the United States. In 1994 the Musée de l’Elysée in Lausanne, Switzerland, presented a Hofer retrospective, The Universal Eye.
Evelyn Hofer was born in Marburg, Germany in 1922 and died in Mexico City in 2009.

First published in the 1950s and 1960s, the stories of Maeve Brennan form a kind of back story to Hofer’s Dublin photographs.  A native of Dublin, Maeve Brennan was born in 1917, leaving at age 17 when her father was appointed to a diplomatic post in Washington, D.C.  Eventually Brennan  became a staff writer at The New Yorker where the stories included in The Springs of Affection appeared.   A selection of Brennan's Dublin stories was published after her death in 1993.   Where Pritchett wrote about Dublin as the outsider he was, Hofer, ever attentive and subtle, seemed able to enter into the people and places she photographed.  Several of Brennan's stories take place in the fictional neighborhood of Ranelagh, a place of brick row houses where the residents are penurious but proud.  ''Our street was called an avenue, because it was blind at one end, the farthest end from us,'' the narrator recalls. 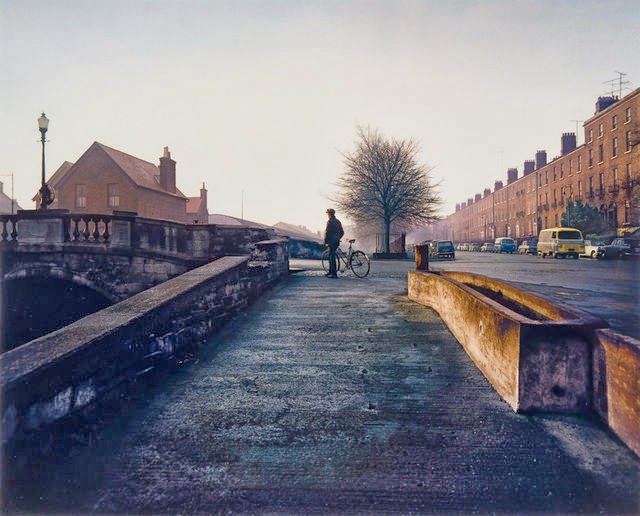 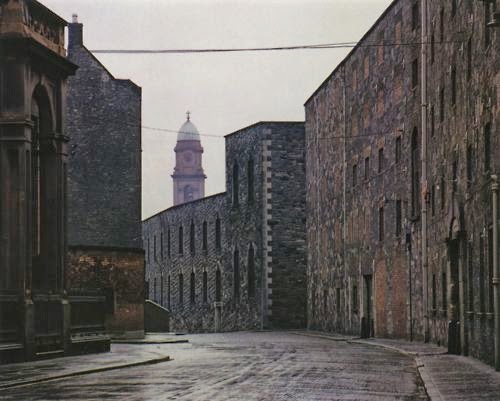 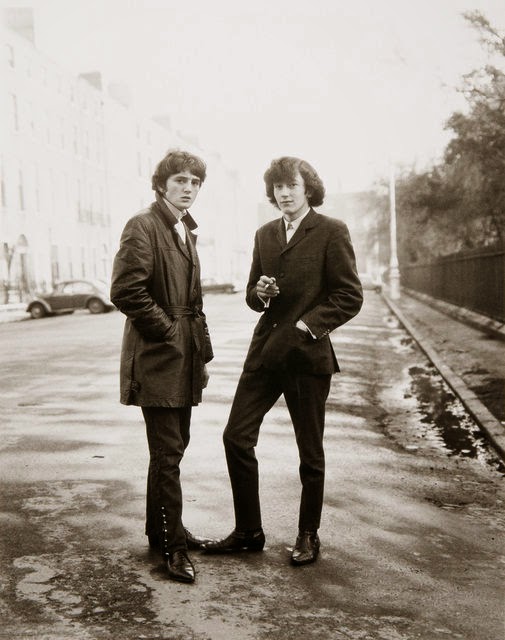 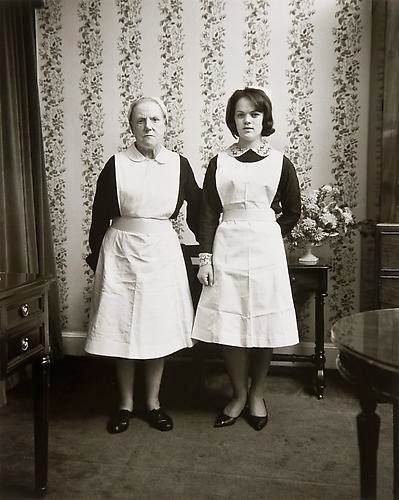 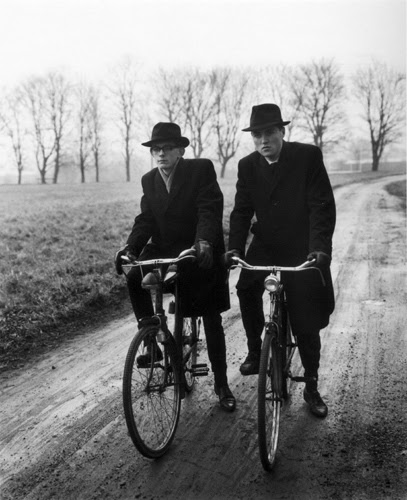 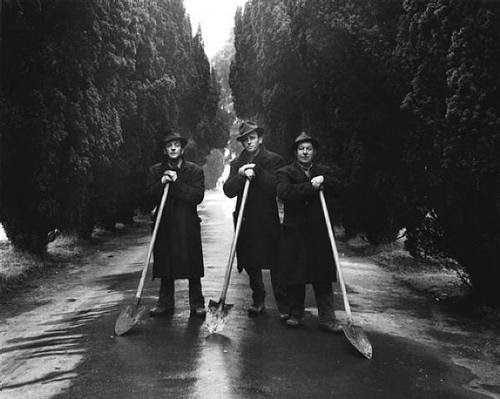 Posted by Jane Librizzi at 7:30 AM

For years I had EH's photograph of the gravediggers on my wall, a wry memento mori and brilliant triple portrait. I had no idea it was from a book about Dublin, and one with magnificent Kodachromes to boot! I went straight to ABEbooks and found an old hardcover copy for myself. Can't praise and thank you enough for this post, from the Eavan Boland poem at the beginning to your appreciation of the still-underrated Evelyn Hofer's documentary sensibility. Wonderful work (as always) and much appreciated.

When you get the book, you will see a much better reproduction of the picture of the children in the Coombe. I couldn't get a better image from the library's scanner, but I really like the photograph. Patience apparently isn't highly valued among digital photographers who seem to operate on 'hit-and-run.' That's why I was cheered - but not surprised - by Renee Akana's photography (link at the right). When I emailed her, she wrote about waiting for the moment, as long as it takes.

My name is Paul Carpenter. I am writing a short piece for an academic journal about Evelyn Hofer and her trip to Dublin in 1966.

Your blog for The Blue Lantern mentioned that Hofer wrote to V.S. Pritchett in January 1966, stating that she had "completed most of the photographs."

Jane, do you have a source for this letter? I only ask as I am trying to date when Hofer undertook her epic work.

Thank you and best wishes

Hello and welcome, Paul. My information came from "Dublin: A Portrait." I hope this bit of a clue proves useful to you. I hope yiur article turns out well. Would love to read it.

Thank you for your reply. I will locate my copy of "Dublin: A Portrait" for reference and send you a copy of the article if it is published.

Best regards and thank you again.